The pandemic has produced a litany of winners and losers on the stock market.

Among those to have suffered most is shopping centre operator Hammerson – at least until now.

Shares in the firm, whose sites include the Bullring in Birmingham, Brent Cross in London and Cabot Circus in Bristol, jumped another 13.3 per cent or 4.9p, to 41.7p.

On the charge: Shares in the Hammerson, whose sites include the Bullring in Birmingham, Brent Cross in London and Cabot Circus in Bristol, jumped another 13.3 per cent or 4.9p, to 41.7p

It has now gained 102 per cent since Boris Johnson outlined his road map out of lockdown, making it the best performer on the FTSE 350 in the past three weeks.

Others to have made gains in that time include Cineworld, up 44 per cent, Mecca bingo owner Rank, up 33 per cent, and British Airways parent IAG, up 30 per cent.

‘Investors are looking to price in an economic upturn and latching on those names that have suffered the most, on the grounds they could offer the fastest recovery in profits, cash-flows and dividends.’ 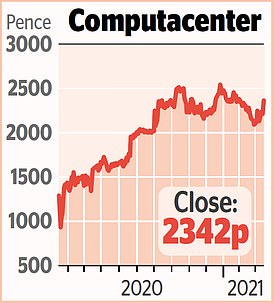 The company has successfully navigated the pandemic as clients switched staff from the office to home. Profits jumped 37 per cent to £200.5million as revenues rose 7.7 per cent to £5.44billion.

The stock rose by 3 per cent, or 68p, to 2342p, having been dragged lower in recent weeks in line with the wider technology sell-off.

The hope for Hammerson, it seems, is that Britons bored of lockdown will flood back to the shops when they reopen to splash the cash.

That is not to say it will be plain sailing for the company, which has already lost a number of key tenants including Debenhams, which has gone bust.

And, it is worth noting, Hammerson shares are still down 70 per cent since the start of last year.

Also on the march was Astrazeneca, the Anglo-Swedish drugs giant at the heart of the European vaccine row.

Astra chief Pascal Soriot said: ‘The long-acting antibody combination has the potential to offer almost immediate protection to those who are not able to be vaccinated, to both prevent infection or treat the disease in patients already infected with the virus.’

Marketing group 4imprint Group fell 8.2 per cent, or 220p, to 2470p as the pandemic hammered demand for the promotional goods it makes such as branded pens, T-shirts and even hand sanitiser and masks. Revenues fell 35 per cent to £403million last year while profits were down 93 per cent to £2.7million.

Oilfield services firm Petrofac followed Monday’s 18.6 per cent fall with a drop of 9.8 per cent, or 10.68p, to 98.72p after it was barred from competing for contracts in the UAE.

Miner Antofagasta had a bumper year thanks to strong rises in the price of copper and gold. Profits jumped 12.3 per cent to £1.9billion with revenues up 3.3 per cent to £3.7billion despite sales volumes falling.

Copper prices soared to a ten-year high in February as China’s economic recovery increased demand. Dividends will nearly treble to 39.4p a share. The stock dipped 1.2 per cent, or 20.5p, to 1716p.

Infrastructure firm Costain made a £96.1million loss in 2020 as poor contract decisions bit.

Bosses wrote off losses on two projects – a gas station job in Peterborough and Huntingdon, and the A465 project following a dispute with the Welsh Government. It rose 4.5 per cent, or 3.1p, to 66.3p.

ScS will return some furlough money to the Government as the sofa seller benefited from an 81 per cent rise in online sales in the six months to January 24. It shares rose 4.3 per cent, or 10p, to 242p.