MARKET REPORT: Slick move for Shell as oil giant lifts dividend after profits surge on the back of rising crude prices

Savers and pensioners were given another boost to their pots after Shell lifted its prize dividend.

The rise is a modest 4 per cent to 12.4p per share – but is encouraging for ordinary Britons whose finances were left bruised by the energy giant’s decision to drastically slash its payout by two-thirds last year after the business was pummelled by the pandemic.

The oil major revealed yesterday that profits in the first three months of the year surged to £2.3billion on the back of rising crude prices.

Divi boost: Shell lifted its prize dividend by 4 per cent to 12.4p per share after revealing  profits in the first three months of the year surged to £2.3bn on the back of rising crude prices

Share buybacks are not back on the cards yet for Shell – which is holding off until its debt pile falls to £47billion. It is currently at £51billion.

Rival BP, on the other hand, has relaunched share buybacks after reaching its debt goal more than a year early – but has yet to increase its dividend. 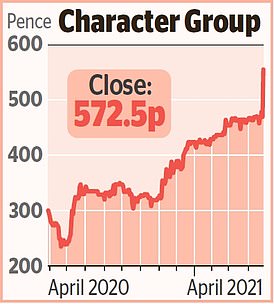 Toy maker and designer Character Group is heading for its best ever year after sales soared.

The company said it was because it has such a strong roster of brands, with Peppa Pig, Scooby Doo and Pokemon gear all beating sales expectations.

It expects sales to get a boost now shops are open again.

Their drops came even as crude prices rose 1.4pc to $68 a barrel – fuelling talk among market analysts that we are entering a new commodities ‘supercycle’.

There was further evidence elsewhere, as iron ore and copper prices shot to fresh highs.

Copper was trading above $10,000 a ton for the first time since 2011, during the last era of bumper metals prices.

Copper is often seen as a key bellwether for the global economy and the metal’s rise is partly down to major countries beginning to recover from Covid.

But copper is also gaining because of sweeping environmental pledges from governments, as it is a key material in green technology.

In a quarterly production report, Glencore (down 0.9 per cent, or 2.85p, to 300p) said its trading arm had a strong start to the year because of the commodities boom.

The trading and mining group said annual earnings in this division would be at the upper end of its £1.6billion to £2.3billion range.

Elsewhere, in another day choc-a-bloc with company results, Smith & Nephew and DS Smith were in high demand.

DS Smith is also investing in new box factories in Europe to capitalise on the online shopping trend that took root during lockdowns.

Artificial hip and knee maker Smith & Nephew (up 5.6 per cent, or 83p, to 1568p) was confident enough about its outlook to reinstate full-year guidance as the number of elective surgeries performed began to rise again.

Many non-emergency procedures were put on hold during the height of the pandemic as hospitals focused their attention on Covid patients.

It also emerged that Kenneth Dart, a reclusive billionaire based in the Cayman Islands, has taken a 7 per cent stake in BAT and 3 per cent in Imperial.