Global stock markets rallied on hopes that central banks may not raise interest rates as much as was feared.

The gains were echoed around the world with the Dax up 3.78 per cent in Frankfurt and the Cac 4.24 per cent better off in Paris.

The rally came as investors began to price in the possibility that central banks would tread more cautiously when raising interest rates to tackle sky-high inflation given turbulence on financial markets and concerns about recession.

‘Quite clearly, the RBA decision will stoke speculation that other central banks will begin slowing the pace of hikes,’ said TD Securities analysts in a note.

Bond yields – a key measure of borrowing costs for government that underpin interest rates facing households and businesses – eased back from recent highs.

Investors now expect interest rates in the UK to peak at under 5.5 per cent next year having last week pencilled in a high of over 6 per cent.

But analysts warned the optimism may be misplaced, particularly as the Federal Reserve in the US has taken such a strong line in tackling inflation in the world’s biggest economy. 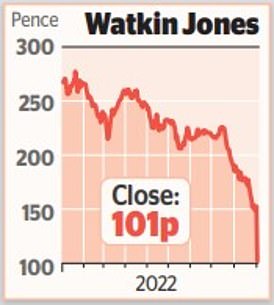 The housing developer warned that profits for the 12 months to the end of September will be 10 per cent lower than expected.

Despite an improved second-half performance, two sales the group expected to complete last month were hit by ‘recent market volatility’ and will now go through in the new financial year as a result of the increased market turbulence.

On hopes that the Fed may take its foot off the pedal sometime soon, Michael Brown, chief strategist at Caxton FX, said: ‘My firm view is that this will not be the case. The Fed has effectively become a single-issue central bank, that issue being bringing inflation back to the 2 per cent target.’

London’s markets received a much-needed boost from UBS, which said UK stocks are its most preferred on a regional basis.

‘Only about a quarter of FTSE 100 revenues are generated in the UK, so the global economy matters much more than the domestic backdrop,’ said Matthew Gilman of UBS.

AJ Bell financial analyst Danni Hewson said investors looked to have rediscovered an appetite for risk as a sea of green swept across global stock markets.

But she added: ‘How long this party lasts is another matter.’

Hargreaves Lansdown was described as a ‘good and highly profitable business’ in a vote of confidence for the investment platform.

Among the mid-cap index, market sentiment towards Drax appeared to take a hit after the BBC reported the power firm was cutting down trees in environmentally-important forests in British Columbia, Canada, to make wood pellets.

Drax insisted the majority of material used to make the pellets it uses to fuel its ‘green’ power station in Yorkshire comes from leftover sawdust, wood chips and bark, with the rest coming from waste within the forest that would otherwise be burned. Shares fell 5.2 per cent, or 31.5p, to 571p.

Great Portland Estates has sold one of its properties to a private German family office for £190million.

The London-focused landlord said the sale of 50 Finsbury Square to a wholly owned subsidiary of Wirtgen Invest Holding is expected to be completed next year.