Dr Martens was on the back foot after its previous owner and biggest shareholder flogged a chunky stake in the group.

Private equity firm Permira sold a 6.5 per cent holding in the bootmaker worth £257million – almost as much as it paid for Dr Martens in 2013.

The surprise sale comes a year after the private equity giant steered the company through a bumper £3.7billion float and takes Permira’s remaining stake to 36.4 per cent – making it far and away still the biggest shareholder.

Private equity firm Permira sold a 6.5% holding in Dr Martens worth £257m. This is almost as much as Permira paid for the bootmaker in 2013

Dr Martens was one of the London stock market’s listing success stories last year. The company has a long history in the UK, where its distinctive shoes have been favoured by everyone from postmen to punks.

The boots were launched in Germany by Dr Klaus Martens in the 1940s and first appeared in British shops in 1960 after the Griggs family bought the patent rights.

Permira – which bought Dr Martens from the Griggs – took the company to market at 370p per share but it has since scaled highs of more than 500p before falling back. 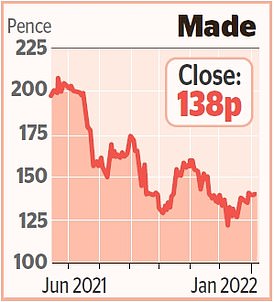 Online furniture retailer Made.com has hailed a 38 per cent jump in sales despite supply chain woes and said delivery delays were easing.

Its full-year sales lifted to £434million, with 25 per cent growth year-on-year over the second half.

Last month it warned sales figures would be cut by up to £45million in 2021 due to factory closures and shipping delays, meaning earnings would be between £12million and £15million lower than forecast.

In this week’s deal, Permira sold the 65m shares for 395p, which was at a discount to its price the day before.

Growing concerns about inflation have fuelled expectations that central banks including the Bank of England and US Federal Reserve will raise interest rates in the coming months.

The Bank of England has raised them once since the pandemic struck, from 0.1 per cent to 0.25 per cent last month, and further moves are firmly on the cards.

With the Fed also expected to act in the US, Wall Street has wobbled. This knocked shares in some of the big London-listed investment trusts that have holdings in US tech giants such as Netflix, Amazon and Alphabet.

While the prospect of higher interest rates has hit tech companies, banking stocks made gains.

Ten Entertainment bowled a strike with an update that showed its second biggest trading week was over the New Year.

The bowling alley operator, which has more than 40 sites in the UK, said it expects profits for 2021 to be at the ‘top end of expectation’.

It comes as it made record profit every month since June – offsetting losses racked up during the tighter Covid restrictions over the winter and spring.

Chief executive Graham Blackwell said: ‘We had predicted a strong summer because of staycations but were most pleased by how that demand kept up a really good pace for the rest of the year.’ Shares rose 3.7 per cent, or 9p, to 255p.

Over on AIM, video game developer Team17 climbed 3.9 per cent, or 30p, to 800p after it too had an update on profits. The group said 2021 revenue and profits would be above expectations.

It also announced two takeovers – with the acquisition of US-based publisher The Label for up to £30million and the intellectual property for the Hell Let Loose game for as much as £46million.