Tech stocks tumbled again as the prospect of faster interest rate hikes from the Federal Reserve caused panic in the markets.

The Nasdaq Composite index on Wall Street, which is dominated by tech behemoths, fell more than 2 per cent in early trading amid concerns some share prices have been inflated by the influx of new money printed during the pandemic.

The prospect of the cheap money tap being turned off caused traders to swap growth stocks for safer alternatives, triggering the rout.

Tech wreck: The Nasdaq Composite index on Wall Street fell nearly 2% amid concerns some share prices have been inflated by the influx of new money printed during the pandemic

It was bad news for some British savers as investment trusts with large holdings in US tech companies took a hammering in London.

The sell-off meant the Nasdaq was down almost 10 per cent from its all-time high reached in November, putting it close to a key threshold indicating a market correction.

A correction is a decline in the value of a stock or other asset of 10 per cent or more from its most recent peak. 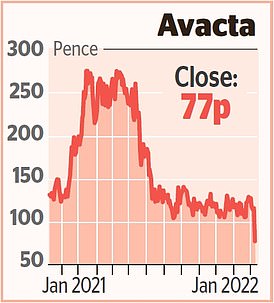 Diagnostic firm Avacta lost over a quarter of its value after pausing sales of its Affi DX Covid-19 test.

Lab analysis had shown the test was less effective at detecting the Omicron variant in low viral loads compared to other variants of the virus, the firm said.

Avacta has stopped sales while it replaces the antibodies used in Affi DX in order to boost its effectiveness. It did not give a date for when sales would resume.

Shares in The Hut Group took a battering after it handed over documents to regulators supposedly showing a plot to drive down its share price.

Shares in the online shopping specialist sank 7.7 per cent, or 14.9p, to 179.5p after reports over the weekend said the firm had provided data to the Financial Conduct Authority (FCA) related to what it said was irregular trading of its shares.

Despite floating with much fanfare in September 2020, THG’s stock has dropped by nearly two-thirds in value amid concerns about the potential of the business as well as the influence of its founder Matt Moulding.

However, the firm has alleged the share price plunge was instead part of a coordinated plan of mass selling designed to push down its value, according to The Sunday Times.

Despite the sharp decline, analysts at Liberum were upbeat, rating THG’s shares at ‘buy’ with a target price of 750p.

The broker said the fundamentals of the business ‘have not changed’ since its listing and that the share price decline was ‘excessive’.

Currency exchange group Wise slumped to an all-time low after analysts at Citigroup told their clients to dump the shares.

In a note, the bank downgraded their rating to ‘sell’ from ‘neutral’ and slashed their target price to 650p from 1030p, saying the shares were trading on ‘excessive long-term growth expectations’.

Hikma Pharma launched a business focused on ready-to-use injectable medicines for the US healthcare market. Called Hikma 503B, it is aiming to build on the firm’s position as a leading supplier of injectable drugs to US hospitals and will operate out of a facility in New Jersey. Shares were down 1.5 per cent, or 31p, at 2103p.

Elsewhere, Nightcap, owner of the London Cocktail Club bar chain, toasted a strong rise in sales in the second half of 2021.