When someone offers to share a meal with you, it’s usually because they’re a kind and generous person.

Not so for monkeys.

Scientists have developed a different explanation for why primates are willing to share with one another.

Monkeys only tend to be generous in public because they want to enhance their status (thereby appearing more attractive to potential mates), boost their offspring, or perhaps sharing is a required norm within the group.

But a new study has left scientists puzzled after marmoset monkeys seem to defy those scientific norms.

Researchers often to refer to scientific norms to explain why monkeys share food: reputation, group rules or preserving their offspring. But marmosets (pictured) don’t seem to fit the mold

The research, published in Biology Letters earlier this month, involved studying how much help marmosets provide to one another.

Anthropologists from the University of Zurich looked for differences in behavior when the marmosets were present in a group or when no audience was present.

Strikingly, they found that marmosets shared more food with their little ones when no one was looking.

Specifically, the scientists found that adult marmosets shared their food with a begging baby in private 85% of the time.

By comparison, when they were in a group, the adults shared food with their baby only 67% of the time.

‘Contrary to both predictions, we found a reverse audience effect on food-sharing behavior: marmosets would systematically share more food with immatures when no audience was present,’ the study explains.

Scientists have always relied on those behavioral norms to explain acts of altruism. 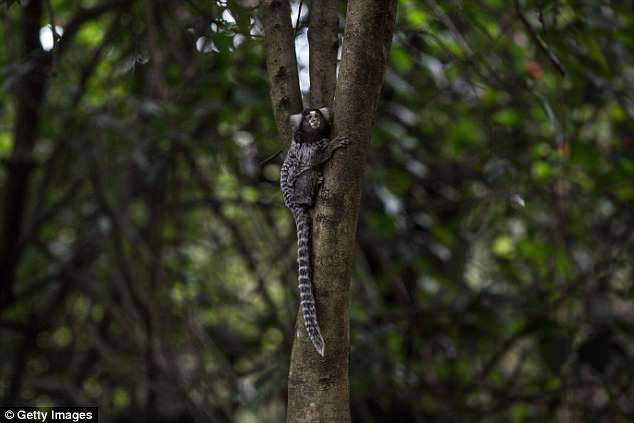 Research published this month in the Biology of Letters studied whether marmosets are more generous in public or in private. Scientists were shocked to find they share more in private

One is commonly referred to as the ‘pay-to-stay’ model, wherein animals may be charitable to each other because that’s required within the group.

If an animal isn’t charitable, they risk getting kicked out of the group or being rejected by any potential mates.

In other cases, an animal may share food to keep their offspring alive, thereby preserving their genes are passed onto future generations.

A final explanation involves an animal shows generosity in order to enhance their status.

If the animal has more than enough food to share, they appear more prestigious, which may increase their pool of prospective mates.

But marmosets don’t seem to exhibit generosity for selfish purposes. 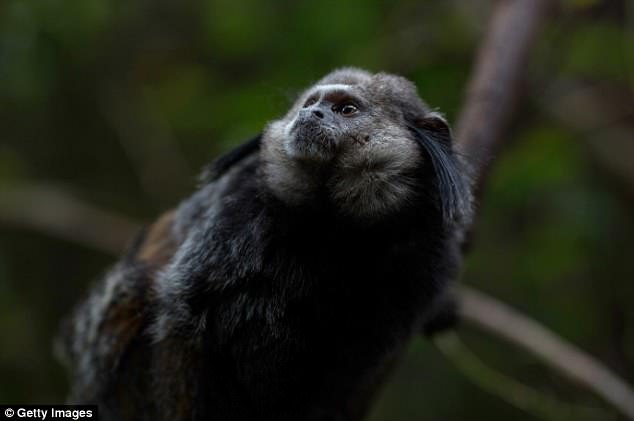 Specifically, the scientists found that adult marmosets shared their food with a begging baby in private 85% of the time vs. just 67% when they were in a group setting

CAN A GOOD DAD MAKE FOR HEALTHIER KIDS? YES, IF YOU’RE A MARMOSET

A study, published in the journal PLOS ONE and conducted by researchers at the University of Wisconsin-Madison, involved sorting two dozen marmoset fathers by playing them recordings of infant marmoset distress calls.

The researchers found that 60 per cent of the fathers responded to the calls by searching for their source.

Babies of the responsive fathers were far more likely to survive their first 30 days. 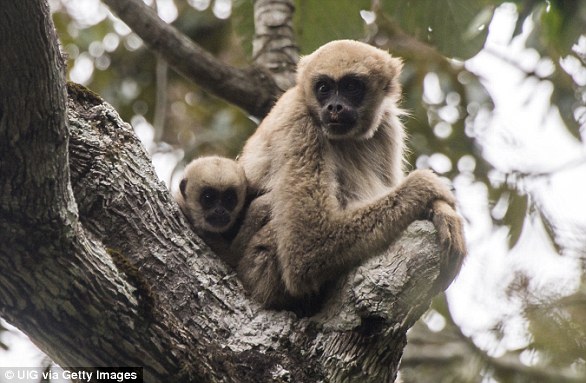 A new study found that fathers in colonies of the common marmoset, a small primate found in Central and South America, split child care duties with their mates – but some marmoset fathers are more attentive than others

At around six to 12 weeks-old, young marmosets born to the more attentive dads began gaining weight faster than the offspring born to the inattentive fathers.

This is the time at which marmosets begin weaning off their mother’s milk, and marmoset fathers take an active role in moving babies from milk to solid food.

The researchers also found that the responsive marmoset dads experience a boost of testosterone when they look for their crying baby after hearing the recording.

‘Helping in common marmosets, at least in related family groups, does not support pay-to-stay or the social prestige model, and helpers do not take advantage of the opportunity to engage in reputation management,’ the scientists wrote.

The scientists believe that human behaviors may help explain why the marmosets were so kind in private.

‘The marmoset pattern of results calls to mind the so-called diffusion of responsibility effect, which is well established in humans,’ the scientists said.

‘People are less likely to help in the presence of a larger number of bystanders, but feel more responsible alone with a needy individual’.