A 50-year-old woman who weighed 138 kilos after spending $450 on takeaway a week has revealed how she dropped 10 dress sizes.

The morbidly obese woman – who described herself as an emotional eater – wore size 30 clothing at her heaviest.

But determined to get on top of her weight once and for all, Ms Benney shed nearly half her body weight after undergoing a rigorous training regime and overhauling her diet.

Before and after: At her heaviest Marney Benney from Melbourne tipped the scales at 138 kilograms – but through a gruelling fitness regime, she incredibly shed half her body weight 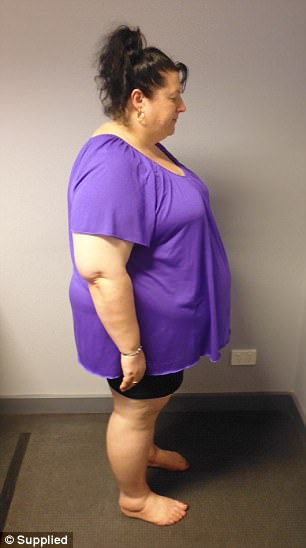 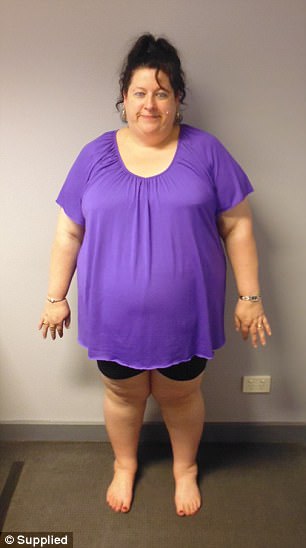 But before embarking on her weight loss journey, Mr Benney revealed how she and her partner were spending more than $23,400 on fast foods for a year – an unhealthy lifestyle that went on for nearly two years.

‘A classic couch potato and a massive emotional eater, living predominantly on chocolate and all things sweet or fried and washing it down with a soft drink is an apt way to describe the old me,’ she told News.com.au.

She explained the problem with her weight wasn’t so much to do with portions, more she was constantly turning to the wrong sorts of food when she was hungry.

‘I would skip breakfast and lunch and by the time I go home from work we would pick up takeaway which was mainly fish and chips, to Maccas and Chinese food.’

At the age of 46, Ms Beeney revealed she was hit by a medical diagnosis that finally helped turn her life around for good.

She was told by doctors that if she didn’t get her ever-increasing weight under control she was a prime candidate for diabetes, stroke or an imminent heart attack. 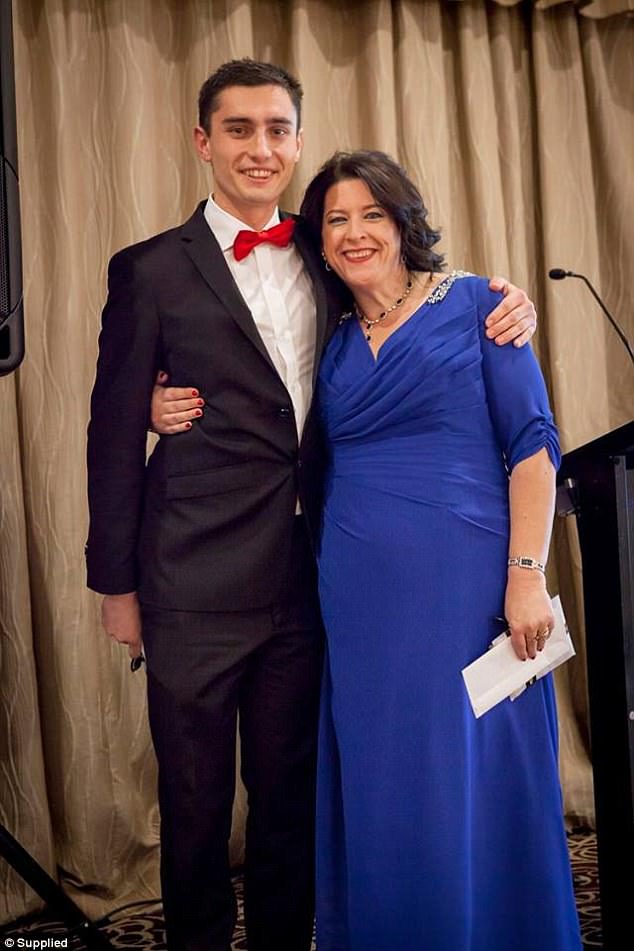 James Harris, Ms Benney’s personal trainer helped her every step of the way

Ms Benney told Daily Mail Australia previously it took these health warnings – along with the shock of the number on the scales – to push her into taking drastic action.

My trainer James saw that I needed help and discreetly came over and tied my shoes,’ she said. ‘He did that for two months until I could do it for myself

‘I absolutely despised myself back then. I really hated me because I was so uncomfortable in my own skin,’ she said.

Ms Benney’s miraculous transformation, one that saw her shed 70kg and drop 10 dress sizes, was through a combination of diet and exercise and part of that winning formula was to ensure she’d be able to attend regular workout sessions.

‘It [the gym] had to be close to home, I knew if I had to go too far out of my way I probably wouldn’t get there.’ 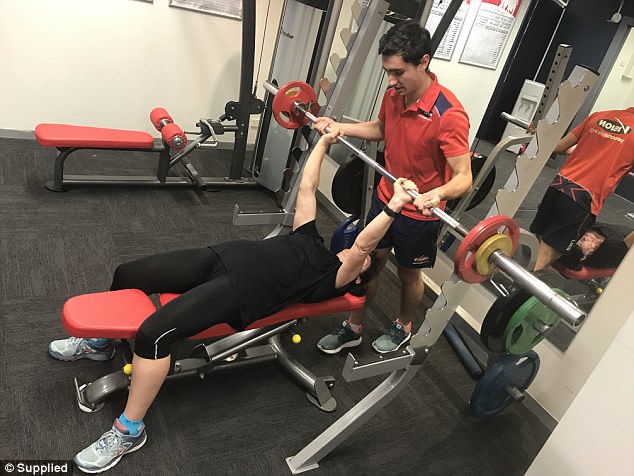 However, she recalls she was ‘petrified’ the day she turned up to her first training session; a situation which was made even more difficult by the fact she couldn’t bend down to tie her own shoes.

‘My trainer James saw that I needed help and discreetly came over and tied my shoes,’ she said.

‘He did that for two months until I could do it for myself.’

Since 2015, Ms Benney has worked with the same personal trainer, James Harris, at her Hawthorne gym.

Ms Benney credits his training plan for helping her strengthen slowly over time and to develop the resilience – physically and emotionally – to stay the course.

She began with free weights at first before moving on to boxing classes. As her fitness increased she took on cross-training which she said gave her the stamina to start running. 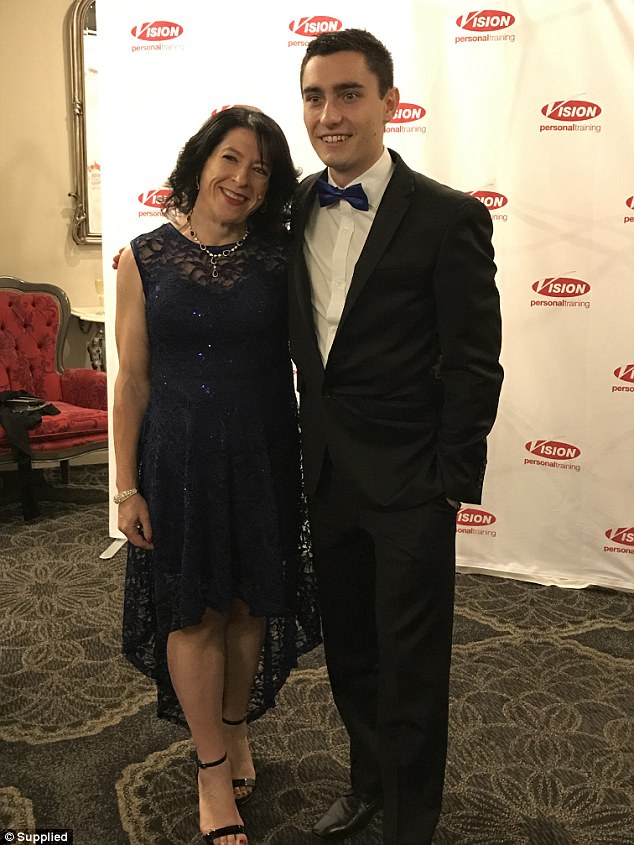 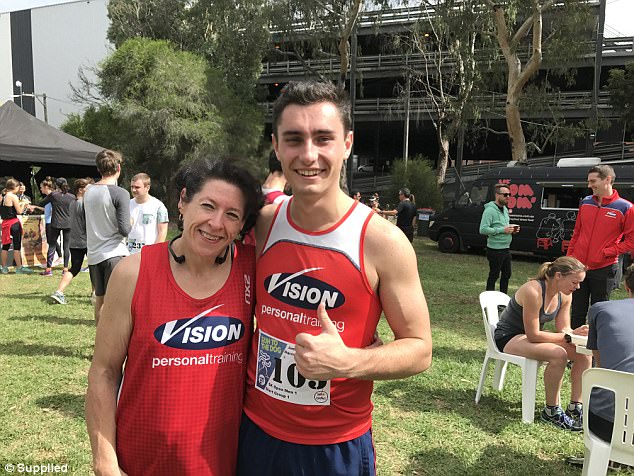 Since committing to a life of health and fitness, Ms Benney is now doing things she thought she would never be able to do

THE FOUR ‘E’S OF WEIGHT LOSS

Diet also played a major part. The former junk food addict has gone from constantly grazing on lollies, chips and takeaways to eating five or six small meals a day.

Ms Benney said protein forms a part of most meals in the form of eggs, yoghurt, tuna or chicken, as does an array of fresh fruit and vegetables.

‘I make healthy choices now, but they’re tasty… I have gone from a classic potato to someone who is now living,’ she said.

‘I am doing things now that I thought I would never be able to do.

Now weighing 77.2 kilos, Ms Benney said she feels happier more than ever – while she continues to work hard at maintaining her svelte physique she holds the view if she can be successful, so can others:

‘Make small steps toward change and remember anyone can do it,’ she advised.

‘Reach out to people who will support you because it makes all the difference. You can change your life, and then you can help others change theirs.

‘All it takes is one step and a helping hand.’