A doctor who fondled a paramedic’s breasts after she asked for paracetamol to treat her headache has been told he can keep his job.

Dr Maher Khetyar, 45, told a medical tribunal that he was ‘very tired’ when he put his hand into the woman’s bra and cupped and squeezed her breasts after insisting on examining her for cardiac problems in July 2013 at High Wycombe Hospital.

The married doctor was suspended for 12 months after a medical tribunal noted that he displayed ‘genuine remorse’ and was ‘developing insight’.

He stated ‘medicine is my life, it is the only thing I love’ and his wife gave evidence before the tribunal, speaking of financial and personal difficulties.

The hearing found that allegations of sexual misconduct were proved in relation to three females, of which two were colleagues and one was a patient.

The first incident took place in 2004 at Caithness General Hospital, in Wick,  Scotland. A nurse claimed that Khetyar touched her neck before attempting to hug her and ask for her mobile number.

In 2014, a woman, dubbed Patient B, underwent an X-ray at Ashford and St Peter’s Hospital in Lyne, Surrey, after suffering breathing problems. She claimed that the doctor stood ‘extremely close’ to her before he cupped and squeezed both of her breasts.

During the hearing, in Manchester, the paramedic claimed that immediately after the encounter she found herself trying to ‘justify’ the need for the examination.

She quizzed a more experienced paramedic to see whether he believed this was necessary and informed management. Subsequently they called for the assistance of Thames Valley Police.

The paramedic told the Medical Practitioners Tribunal Service: ‘I asked my colleague if he had any paracetamol but he didn’t. The ambulance had a stock of paracetamol but we have to document where it’s gone with a patient form. It was too much hassle. 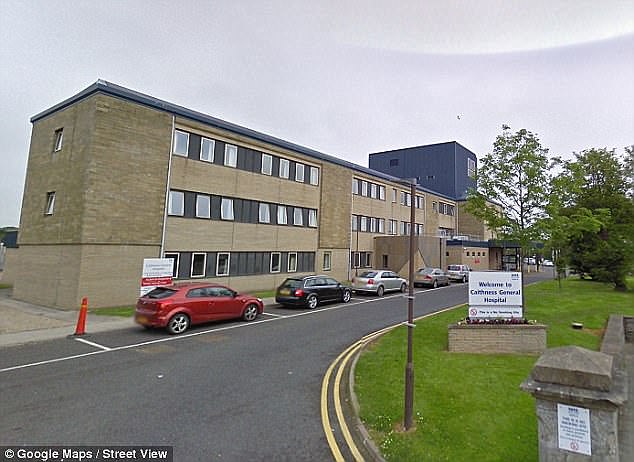 The first incident took place at Caithness General Hospital, in Wick. A nurse claimed that Khetyar touched her neck before attempting to hug her and ask for her mobile number

‘I popped out and went back in to the hospital. I went to the office and asked for some paracetamol. It was Dr Khetyar that offered to assist. I was asked to check my blood pressure in a cubicle.

‘I thought it was a bit irritating for a mild head ache, I could understand that high blood pressure could cause headaches. I accepted it was reasonable and the doctor was doing a thorough check. My blood pressure was fine, it was pretty normal.

‘I undid my buttons to the request of Mr Khetyar. He was prodding my chest above my breast. Then the doctor started to listen to my heart using a stethoscope. He placed the stethoscope on me for less than two seconds. It was for, in my opinion, an excessively short time.

‘Then the doctor put his hand down my top, squeezed my left breast and then my right breast for two seconds. The doctor was stood facing me and he went down the front of my shirt. It was literally a matter of seconds he put his hand down inside my bra and groped.

‘There was squeezing and cupping. His hand was not over my sternum it was inside my bra. It may have been appropriate for him to check my heart, I told him there was a cardiac history and that sometimes my heart went fast. There’s lots of other things that would have needed to be done not just listen to heart sounds.

‘I asked if everything was ok in a sort of flippant, sarcastic question and he said ‘let’s go and get some paracetamol’. I was trying to justify the examination and why this would have taken place. I couldn’t understand why he would do that anyway. I was a bit confused but in my head I hadn’t decided I had been sexually assaulted.

‘I asked my colleague if there was a reason a doctor would do that and had he seen this before. He said there’s nothing normal about what just happened, he said this is sexual assault and not part of a cardiovascular examination.

‘I don’t believe I misinterpreted what he did when he went inside my bra and groped both my breasts. I couldn’t imagine any of my colleagues doing anything inappropriate and I was trying to work out a reason that he would have performed this to try and make it better and make it ok.

Patient B also spoke during the tribunal and recalled the moment she was groped at hospital.

She said: ‘His demeanour seemed to change after, he abruptly walked to the end of the bed after he did it – I definitely didn’t misinterpret what he was doing. After the examination Dr Khetyar told me the X-ray was fine.

‘I was concerned whether he was a real doctor. I called the nurse to tell her what happened and explained what my concerns were. I asked her the name of the doctor that examined me and told her I had a really strange examination.

‘I didn’t think I was going to get sexually assaulted at hospital. He was not performing an examination on me the way he did it – it was inappropriate is what it was.

‘I felt he was extremely close to me and remember then specifically looking at his badge and remembering he was from a well known university. His badge was right in my face.

‘I should have maybe said “you’re standing too close” but I didn’t. That thought process became stronger when I asked the nurse again about a sleeping pill. All the things I thought didn’t seem right – cupping and squeezing my boob, all those together.’

The tribunal heard that although police were called in to investigate the first incident in Scotland, the probe was shelved, prompting the nurse to leave her job as she felt she was ‘made out to be a liar’.

But officers contacted the nurse again in 2014 after the paramedic and third woman came forward.

Khetyar, a father of two from Slough, Berkshire, still denies sexual motivation but ‘respects’ the tribunal’s findings and has apologised to the women involved.