A college professor in Iowa accused of sexual misconduct by several female students was allowed to resign – and now one of his accusers is demanding answers from administrators.

Nickey Jafari, a 2014 graduate of Drake University, is one of the women who filed a complaint against professor Mahmoud Hamad for sexual and verbal misconduct.

Jafari told school administrators that while Hamad was her academic adviser he threatened to spank her if she didn’t get good grades and would ask her to sit on his lap. The now 24-year-old medical student said he also asked her to call him ‘Dad’. 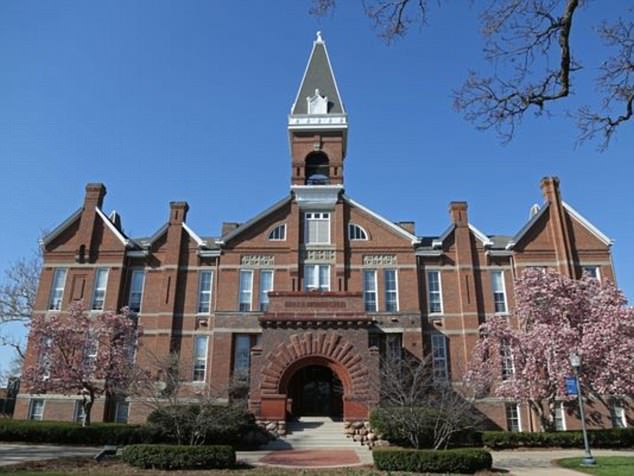 After the school found Hamad did in fact ‘physically, sexually and verbally intimidate’ female students, they allowed him to resign instead of firing him

The school also said the 42-year-old married professor ‘did exploit the power differential that existed between him and his female students’.

The report was completed in November 2017, when Hamad was on a sabbatical.

According to the outlet, Hamad was not fired following the investigation. Instead, he was allowed to resign effective June 1.

He is currently on a leave of absence and has not taught at the school since 2016.

Sue Mattison, Drake’s provost, told the Register that Hamad has no ‘teaching or academic responsibilities’ at the school but declined to say whether he was asked to resign or if he is being paid while on leave, which started when his sabbatical ended.

Jafari, who went public with her claims in a Facebook post last year, said she is disappointed that the university is allowing Hamad to simply walk away from his position. She filed the complaint against her former adviser last May.

‘Allowing (Hamad) to resign is unfair to any survivors,’ she told the Register.

‘Letting him resign instead of firing him is not as clear of a statement from Drake that, ‘This happened and we don’t condone or support it.”

Jafari wrote in the report that she met Hamad in the summer of 2011 when she and other students visited Egypt. She said Hamad led the group and was also the instructor for the honors courses related to the trip. 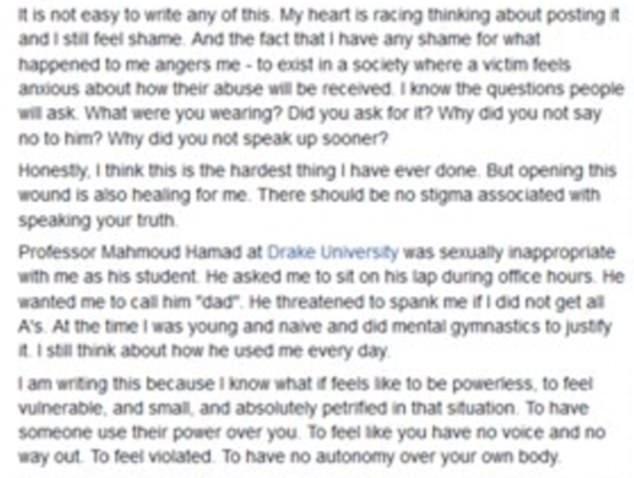 Nickey Jafari, a 2014 graduate of Drake University, went public with her claims against Hamad in this Facebook post above. She was one of the students who filed a complaint with the school against the professor

In the fall of that year, Hamad became her academic adviser.

Jafari told investigators, according to the report, that Hamad asked her to sit on his lap and she complied twice. She said he then put his arms around her and that his face was close to her neck.

She also accused the political science associate professor of asking her to call him ‘Dad’ and threatening to spank her if she didn’t get a 4.0 grade-point average.

‘I decided to come forward because I knew I wasn’t the only one this happened to, and I didn’t want him to be able to move from school to school,’ she told the Register.

A second student at Drake is also listed in the report saying she had an ’emotional and physical relationship’ with Hamad. The student said she never reported it because she was ‘worried about repercussions’.

Hamad denied the allegations, but investigators found that Jafari and others interviewed were ‘credible’ and the professor’s denial was ‘not credible’.

Drake University, which did not refer the case to police, has not said why Hamad was allowed to resign rather than be fired.