A former maths teacher, who has fathered 66 children through sperm donors and has 14 more on the way, is adamant he didn’t lie to his wife and his secret life.

Like most white van drivers, Clive, from Burton in Staffordshire, is a delivery man. But the nature of his packages are somewhat out of the ordinary.

The married 62-year-old delivers sperm – his own – to willing recipients free of charge. Since 2013, he has happily given up whole days to drive from his family home to wherever he is needed.

Clive’s home life is remarkably normal. He has three children with his wife and nine grandchildren. He kept the whole thing secret to his family for a while, but insists he is not a liar.

Like most white van drivers, Clive, from Burton in Staffordshire, is a delivery man. But the nature of his packages are somewhat out of the ordinary 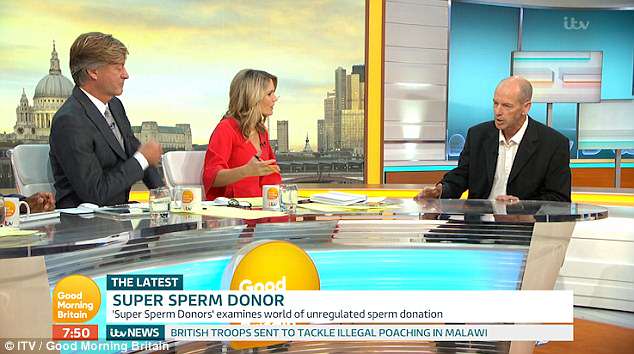 Appearing on Good Morning Britain today, he said: ‘I’m not a liar – I just didn’t tell her’

Appearing on Good Morning Britain today, he said: ‘I’m not a liar – I just didn’t tell her.

‘I did tell the white lies about where I was going. I deliberately left my phone with her one day.

‘My wife is not happy. I’m going to do it for a little longer because I have a number in mind of where I should finish.’

However, because Clive is not offering his sperm via a Government-approved Human Fertilisation and Embryology Authority-licensed clinic he is at risk of being deemed a legal parent.

He also runs the risk of his children potentially and unknowingly meeting and forming relationships together. But the sperm donor is adamant that won’t happen.

He told the ITV show: ‘There’s a chance (my children could meet and start a relationship) but it’s not going to happen.

‘It can happen, there are thousands of donor children on the planet and I think there is only one or two cases where that has happened.

‘In my case one of the mothers has set up a Facebook for mothers. I’m not a mother so I’m not on it.

‘So all the mothers have access to a Facebook which about two-thirds of them have signed up to it. In later years they can contact each other.’ 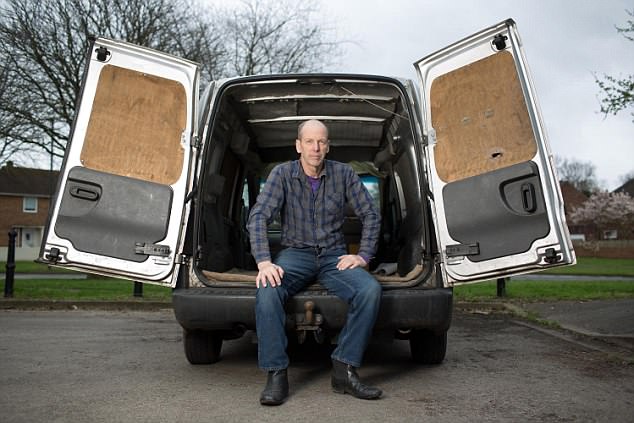 Clive took the dive and became a sperm donor in 2013.

But the idea first sparked in his head as long as a decade ago when he read the stories of others.

He visited a clinic but they refused his sperm on the grounds he was too old to donate.

At 62, Clive is well above the suggested age of 35 (when sperm count often begins to drop).

His response was to place an advert of Facebook in which he was clear about his lifestyle – he enjoys mountain biking – and medical condition (he has no long term problems).

He also provides paperwork of STI checks for anyone who asks. 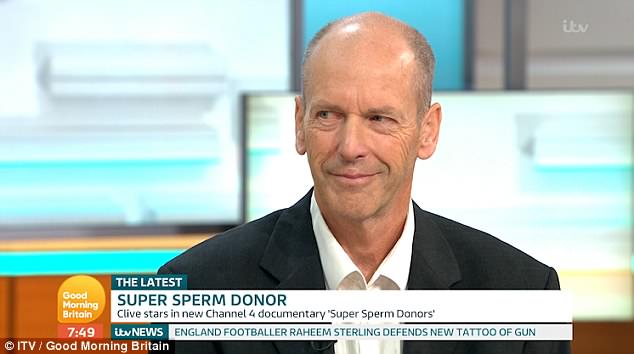 Clive took the dive and became a sperm donor in 2013. But the idea first sparked in his head as long as a decade ago when he read the stories of others

What is the law on sperm donation?

Sperm donors should normally be aged between 18 and 41-years-old.

A donor does not have any legal rights and responsibilities for children born from the donation, provided they donate through a licensed UK fertility clinic.

They will have no say over their upbringing and won’t be required to pay anything towards their care.

However, if the donation is not done at clinic licensed by the HFEA, it is possible that they could be considered the legal father of any children conceived from a donation.

If a donation results in the birth of a child or children, the donor can apply to for information only on the number of children born, their gender, their year of birth.

If a donor donated after April 1 2005, a child born from the donation can find out certain details about them.

If they are aged 16, details they can be told include a physical description, where you were born, ethnicity, and marital status.

If they are aged 18, they can get the donors full name, date and town of birth, and a recent address.

In response to his social media ad Clive was inundated with responses from female recipients.

Defending his business, he said: ‘It’s unfortunate I can’t put the photos of the families who have been created from this. I see the joy that it brings – immense amount of joy.It’s a total mixture but two thirds would be same-sex couples.

‘I pass on a bodily fluid. I don’t think of it like I am going to produce mini-mes. These ladies don’t time it.

‘Sometimes I have to donate quite often, then I have a week off and do a week of lots of donations.’

On arrival, Clive parks in a nearby street before climbing into the back of his van.

There he fills a syringe with his product before clambering out and ringing on the recipient’s doorbell.

A tip, he says, is to keep the donation in the crock of your arm so as to keep it warm.

He then usually engages his recipient in a few second of idle chit chat before jumping back in his van. 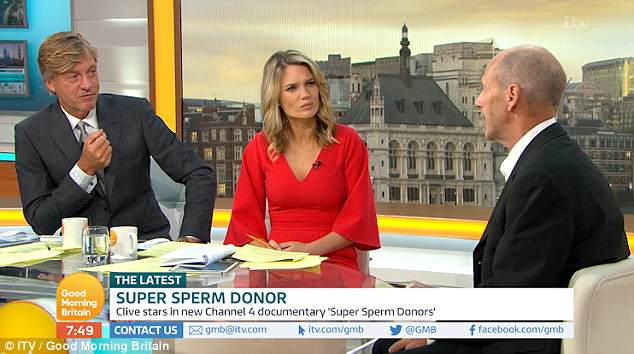 Clive, one of four donors featured in a new documentary by Channel 4, Super Sperm Donors, tries to keep his distance, both physically and emotionally

Often, he says, they are nervous, and this helps to put them at ease.

Clive, one of four donors featured in a new documentary by Channel 4, Super Sperm Donors, tries to keep his distance, both physically and emotionally.

Her often engages in some lighthearted email dialogue before the handover but tries to keep face-to-face transactions short and to the point.

Interestingly, he believes his van will mitigate any claims he is anything more than a simple donor.

He added: ‘Technically to a few of them because not all of them are in a same sex marriage – so technically I am their father and that could happen (support them financially).

‘I’ve been in the business five years and that just doesn’t happen.’