We Buy Any Car-owner pays up in the used car boom: Marshall Motor’s board backs £325m takeover from Constellation Automotive – at a 41% premium price

We Buy Any Car owner Constellation Automotive is set to add Marshall Motor to its stable after the historic auto dealer’s board backed a £325million offer by the online used car marketplace.

Last week Constellation, which also owns BCA and Cinch, made a formal offer of 400p in cash for each Marshall Motor share, valuing the business at around £325million.

Today, Marshall said it considered the terms of the offer – which is a 41.3 per cent premium to the closing price of 283p on 25 November, the last business day before the bid was tabled – to be ‘fair and reasonable’.

Takeover: The Marshall family, which owns 64% of the business, already accepted the offer

The company said Constellation’s offer is also a 168.5 per cent premium to its floatation price of 149p in April 2015.

The board’s recommendation comes after the Marshall family, which owns 64.4 per cent of the business through their Marshall of Cambridge company, already accepted the offer.

Marshall shares ended last week at 392p, having leapt by over 40 per cent last Monday after the bid was tabled. They were up 1p at 393p in early trading today.

Established in 1909 by David Gregory Marshall in a small lock-up garage in Brunswick Gardens, Cambridge as a chauffeur drive company, Marshall later moved into servicing and repairs and then car sales.

With 164 dealerships including Ford, Land Rover and Volkswagen, it is now the seventh largest motor dealer group in Britain.

Last year its turnover was £2.2billion, and it made a pre-tax profit of £20.4million. 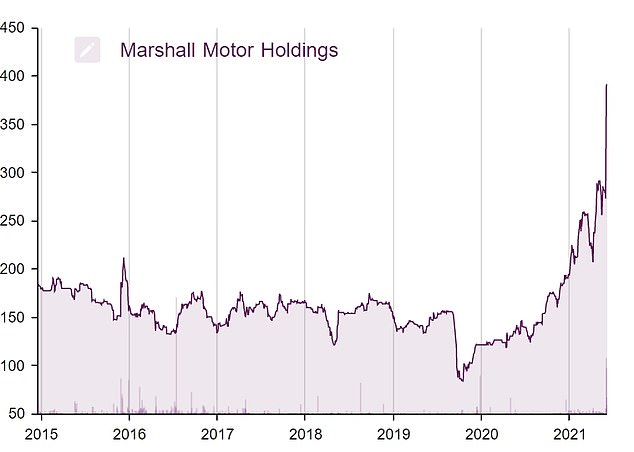 Upward trajectory: Marshall Motor shares have gone from a starting price of 149 in April 2015 to 393p today

Car dealers have seen business grow in recent months, with more people with savings accumulated during lockdown deciding to buy cars instead of using public transport for fear of Covid.

Meanwhile, used-car websites are benefiting from a semiconductor shortage that is continuing to limit new car production and pushing demand for second-hand vehicles soaring, with prices continuing to move upwards.

The acquisition by Constellation would not result in ‘any changes to the conditions of employment’ of Marshall employees or management, according to the companies.

Marshall also said Constellation had pledged to work with Marshall’s manufacturer partners for ‘a long term partnership’ and for Marshall ‘to continue to grow’.

‘The Board also notes that Constellation itself has longstanding strategic business relationships with a number of automotive manufacturers in both the UK and Europe,’ it added.