A martial arts expert has broken down some of the simplest ways to defend yourself against a predator or stranger.

Chris Coles, 63, from the Sydney Self Defence Centre said learning martial arts can be vitally important for personal protection and to inspire confidence in yourself.

Mr Coles said attacks on both women and men can be wild, unexpected and claims his techniques can end up causing less harm to both the victim and the attacker.

Chris Coles (centre) is the Shigong, or keeper of the style, at Sydney Self defence centre and said martial arts is vital to being able to defend yourself and build personal confidence – Pictured with students Dimitra Papadoniou 19, (left) and Nick (right)

To test the effectiveness of these techniques the Daily Mail Australia decided to run through some common situations you might encounter in public or at home.

The style of self defence the group practices, known as Yi Quan Jungfu, focuses on strikes to the eyes, throat, groin and knee in that listed order, rather than raw strength or fitness.

Although this may seem brutal Mr Coles said once a person is attacking you they forfeit their right to a fair fight.

So what do you need to know?

Also known as the headlock, this manoeuvre is commonly used to forcibly take control of a person’s movements and even force them to loose consciousness if they are held tight enough.

Mr Coles said to keep in mind that if someone is under the influence of drugs or alcohol you may need to be strike them several times to be effective.

Step one: Lock down on their arm around your neck with your closest elbow to clear your airway as you and drop your weight lower.

Step two: Use your free hand to drive your fingers into their eyes.

Step three: Use you elbow to ram the person in the crotch three times – this is effective on both men and women.

Step four: Grab their shirt, hair or whatever you can and pull them down as the now surprised attacker opens up their arms and allows you to spin away. 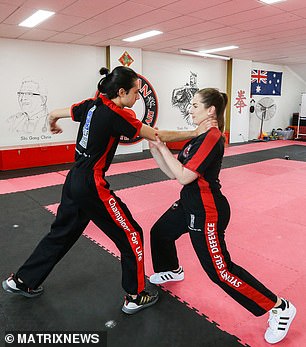 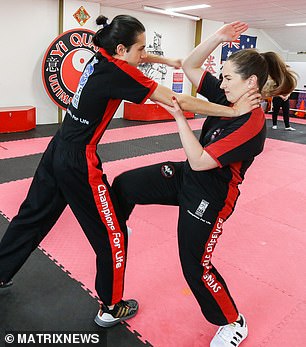 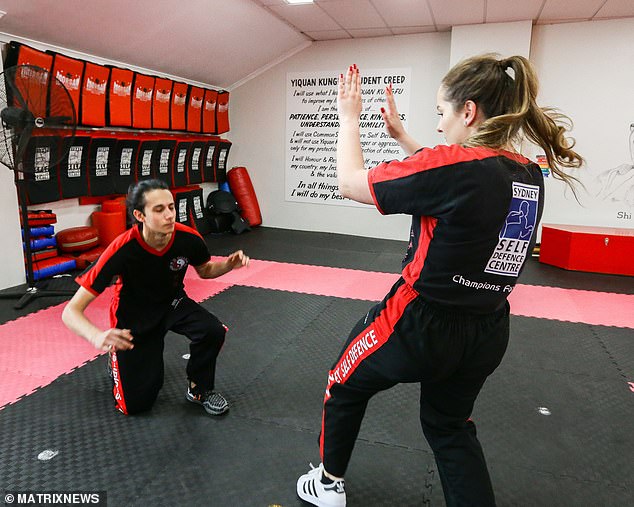 Front Choke With a Punch

Similar to the first attack, this aggressive hold can stop a person from breathing and moving as the other person throws a punch with their other hand.

Mr Coles said it is important that the supposed victim in the situation uses a kick to the groin as even a woman’s typically shorter leg will overcome the reach of a man’s arm.

Step one: Put a defensive arm up on the side the punch is coming from by placing your hand against your ear.

Step three: Push up on the elbow of the arm they are choking you with.

Step four: Kick them in the groin.

Step five: Put your hands up to protect yourself. 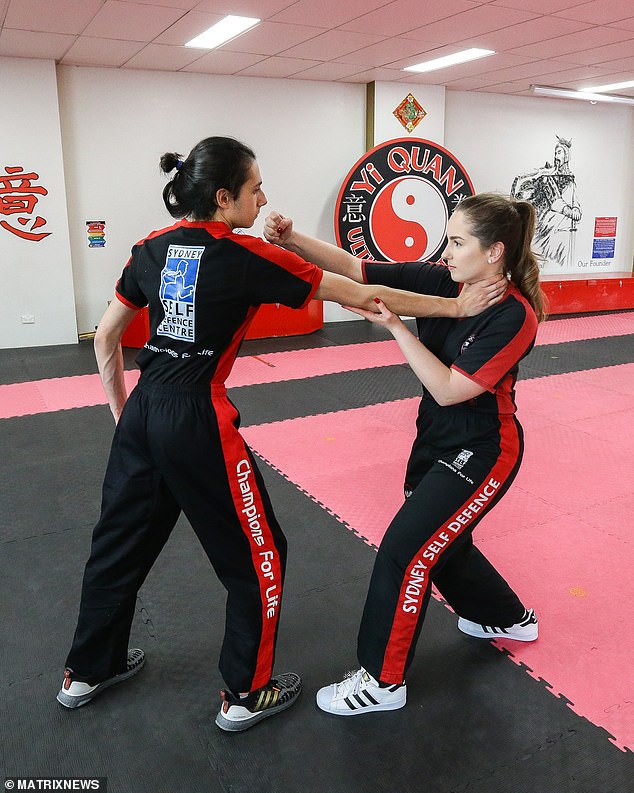 Mr Coles said it is important that the supposed victim in the situation uses a kick to the groin instead of a punch, as even a woman’s typically shorter leg will overcome the reach of a man’s arm but the shorter arm might not do enough damage

A common assault on women is being pulled aggressively by the hair, either as a method of control or intimidation.

The head martial artist said the first reaction that many people have is to pull against the hand holding the hair, but this will only anger the attacker and hurt yourself more.

Step one: Grab where the pain is, not the hand, to stop your hair being pulled out – if they grab you by the roots grab their hand.

Step two: Turn towards them.

Step three: Use the tips of your fingers to strike their eyes, punch them in the throat,  kick them in the groin or knee until they let go.

Step four: Put your hands up to protect yourself and run away if you can. 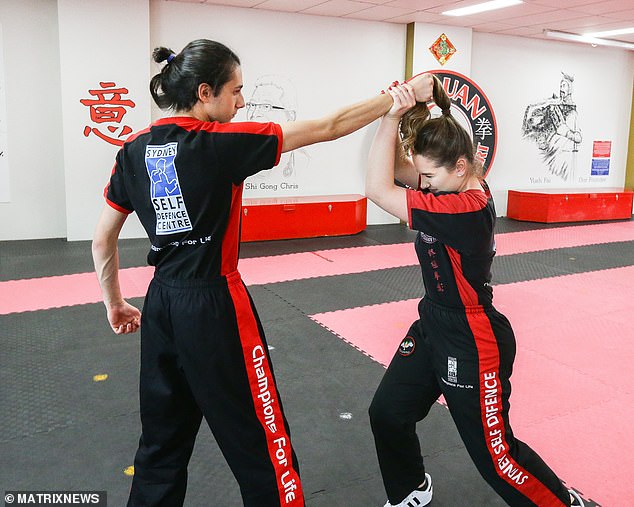 The head martial artist said the first reaction that many people have is to pull against the hand holding the hair, but this will only anger the attacker and hurt yourself more 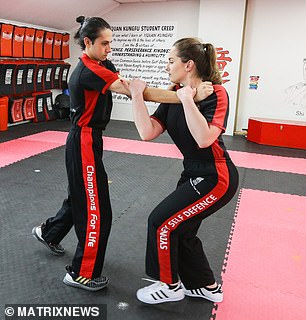 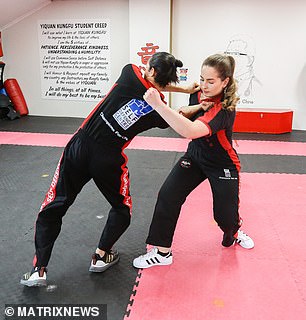 Move with their weight, if you feel them pulling you walk towards them as it takes away their power before you step back a pull down their elbow and then grab whatever you can to pull them to the ground

Grabbing people by the shirt can be used to throw, intimidate or to hold someone while they throw a punch so it is important you act quickly.

Mr Coles warns that for women this may play out differently as they are can grabbed  roughly by their breasts to shock the victim into submission.

He said a common mistake is what he calls ‘mirroring’, where the person will simply grab the other person’s shirt or hands but will be unable to break away.

Step one: Move with their weight, if you feel them pulling you walk towards them as it takes away their power

Step three: Pull their elbow downwards at the joint.

Step four: You step back, pull their elbow down.

Step five: Control their weight by pulling them down by their hair, shirt or whatever you can. 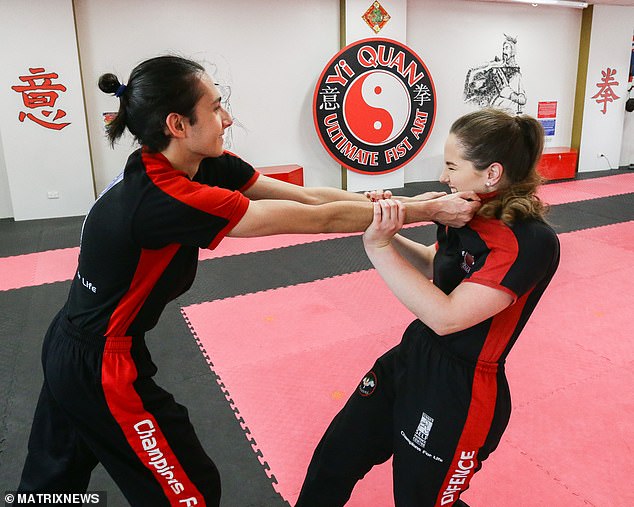 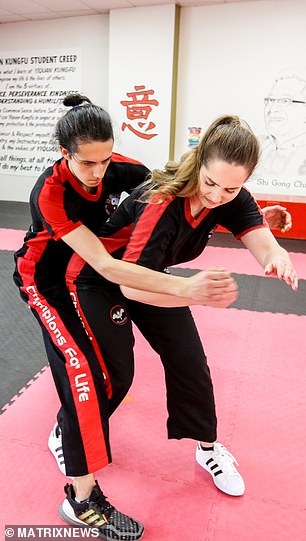 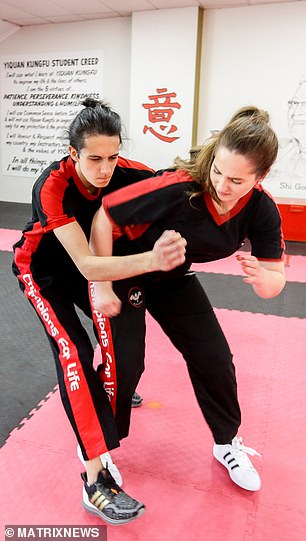 This grab can often be used by surprised as a show of force but can be broken out of with surprising ease.

One ineffective method that is commonly taught Mr Coles said is to drop down through the attacker’s hands, however if they are holding tight enough this will not work.

‘Most people the first thing they do is they freeze up and question why, why are they doing this? You don’t have time for that,’ Mr Coles said.

Step one: This action needs to be explosive – sink down and push forwards with you arms.

Step two: At the same time push your hips back against them – therefore creating a small amount of space between the attacker and their hands.

Step three: Use the distance and take one of your hands to twist to strike them in the groin three times.

Step four: Turn around with your hands up to protect yourself, throw in a kick if there is not enough distance between you. 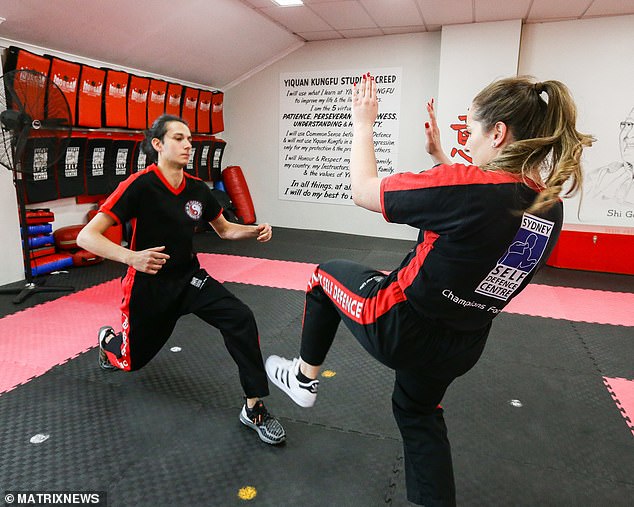 Turn around with your hands up to protect yourself, throw in a kick if there is not enough distance between you

Although these moves can be effective for defending yourself Mr Coles said having a sense of awareness and reading people is highly valuable.

‘You do get gut feelings, you have  a sixth sense and it comes from experience, it comes from body language and what people are saying to you,’ he said.

‘It’s about reading your environments it doesn’t mean you are afraid it mean you are paying attention – women are far better at this than men.’

Mr Coles said over half the 30,000 people his school trains every year are women, as they are increasingly seeing the value of defending themselves.

How can your voice help to protect you?

Visiting Sensei, or martial arts instructor, Briana Harris, 30, said women need to be able to use their voice even in a confined social setting.

‘You need to be explosive, you need to learn how to use your voice, logically you think I need to yell for help,’ she said.

‘When you have the confidence and have ability to look someone in the eyes and say “hey let go of me” it’s a big deal.’

Student Dimitra Papadoniou, 19, has been practising since she was 14, and said the ability to defend herself has made her more confident in herself.

Mr Coles is a White Ribbon ambassador of victims of domestic violence and runs classes to help empower people impacted by their abuse.

‘Coming out of domestic violence for a woman or anyone for that instance can be very difficult,’ he said.

He said victims are often stripped or their confidence, have no money and are often forced to keep in contact with their abusers through child custody arrangements.

For people looking to start learning he recommends attending a workshop session such as those run by his centre and to start further training from there.