The shopkeepers are tending to rows of colourful leather sandals and the streets hum with cheerful chatter and clinking glasses.

If it wasn’t for the masks concealing bronzed faces, life would feel almost normal in the Menorcan capital of Mahon, albeit quieter than usual.

Pre-pandemic, the island (population 90,000) would welcome 1.7 million tourists each year (with British visitors making up its largest market) but it’s still waking from its lockdown slumber. And what a joy that is.

All bases covered: Menorca’s Cala Mitjana beach, which is popular with tourists and locals alike 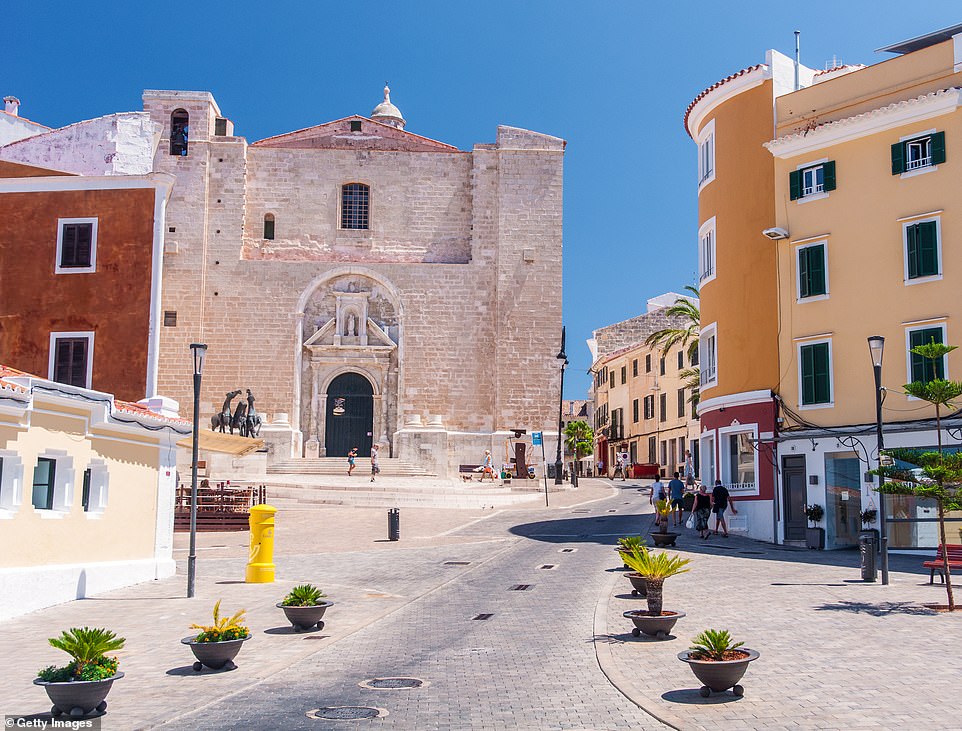 The city of Mahon, pictured, is where Georgian buildings ‘jostle with baroque, Gothic and art nouveau houses’, Harriet Sime reveals

I manage to explore this tiny isle, just 30 miles long and ten miles wide, from top to bottom and left to right in just three days. The roads are quiet and lined with drystone walls, in which sit distinctive gates made out of twisted olive stakes.

Parking is plentiful and the 33c heat and scent of salty sea air hit me each time I step out of the air-conditioned car.

The least populated of the Balearic Islands, Menorca is made up of two charming cities, a collection of white-washed fishing villages, small farms producing olive oil and nutty Mahón cheese, and some of the best beaches in the Mediterranean — most of which can be accessed only after a trek on foot. 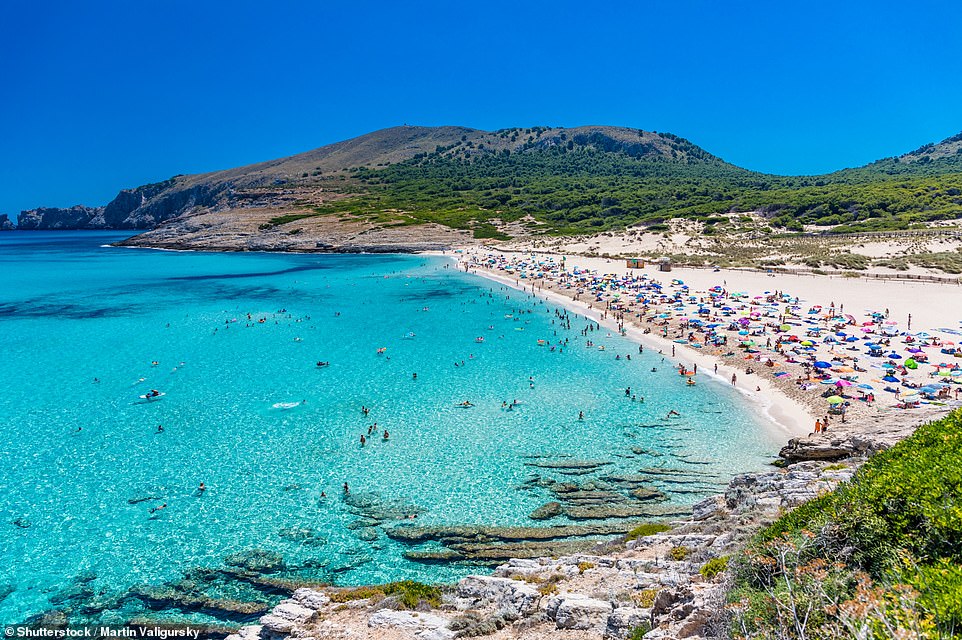 Harriet got chatting with a local named Maria, who informed her that Cala Mesquida, pictured, is one of her favourite Menorcan beaches. However, she has a feeling she might be fibbing. The locals are keen to keep some spots to themselves 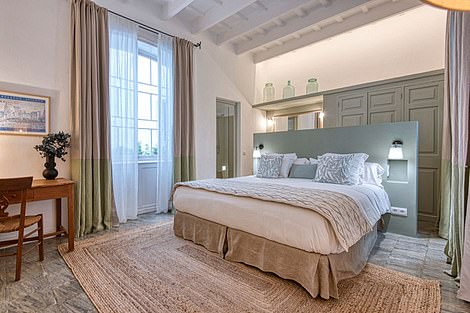 A bedroom at hotel Can Alberti, which occupies a salmon-pink-fronted 1740 mansion

In search of the clearest water, I head to Calo Blanc on the island’s south coast.

Just a narrow tongue of sand, no bigger than three metres wide, it is possibly Menorca’s smallest beach but has plenty of quiet spots for sunbathing on the craggy rocks that surround the astonishingly translucent water. After a quick dip, I drive five minutes west to Calo Binidali and find myself a patch of sand between French children — eating cheese baguettes bigger than their arms — and a local nudist family who watch as their German Shepherd cools off in the water.

My base is Mahon, Spain’s easternmost point, where the sun rises first and sets soonest. The buildings reflect the rich history of an island that has been conquered by the Romans, North Africans, British and French.

Creamy lemon Georgian buildings with bottle-green shutters jostle with baroque, Gothic and art nouveau houses, many of which have been turned into charming boutique hotels.

Can Alberti, a salmon-pink-fronted 1740 mansion on one of the city’s best streets, is a fine example of this, with rustic tiled floors and artwork on the walls. 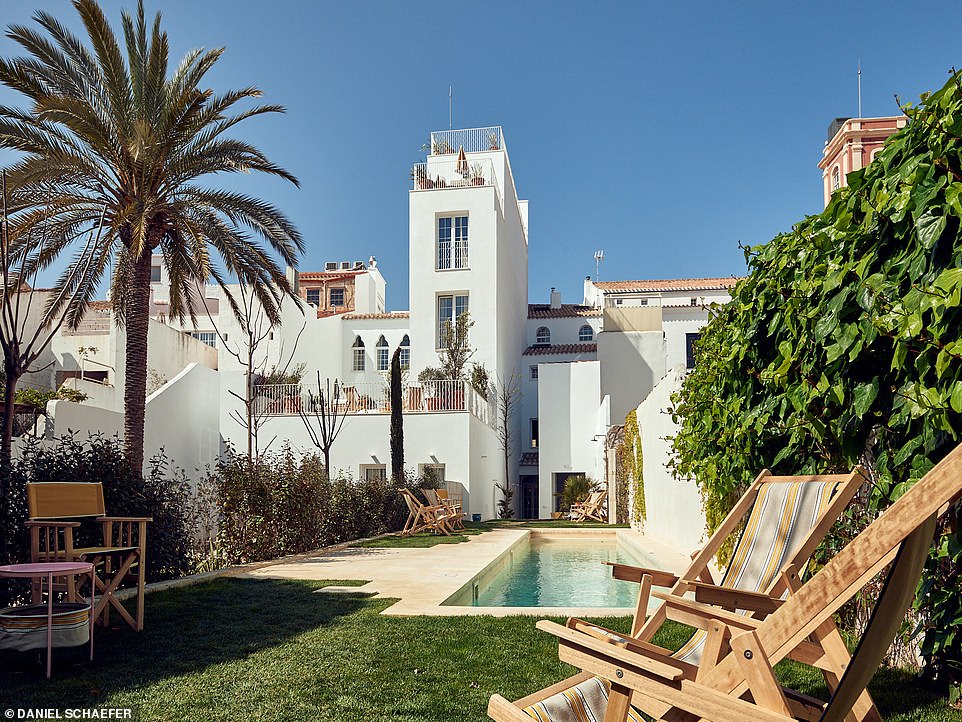 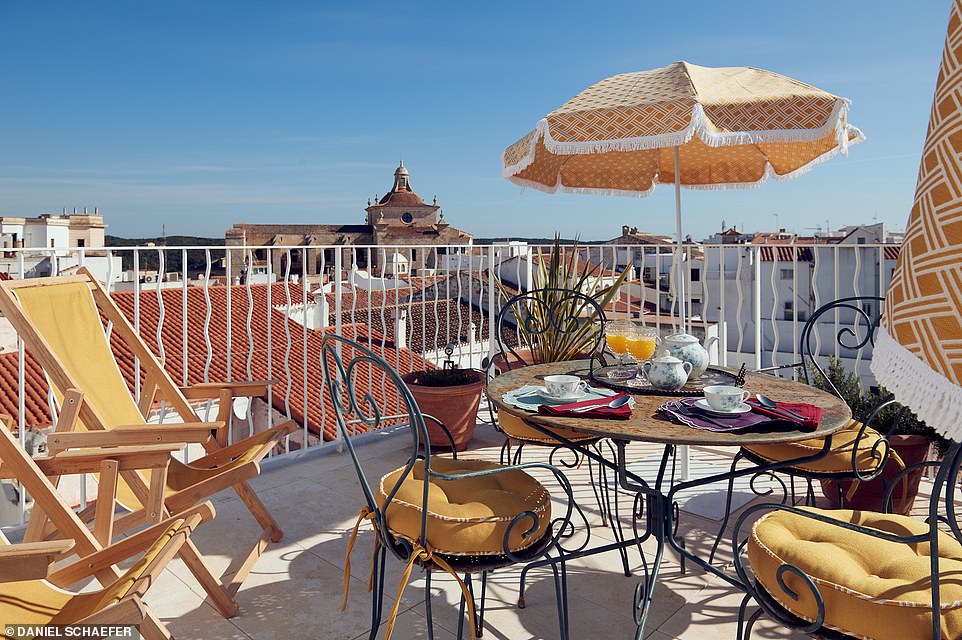 Cristine Bedfor is ‘one of the most stylish places I’ve ever set foot in’, enthuses Harriet 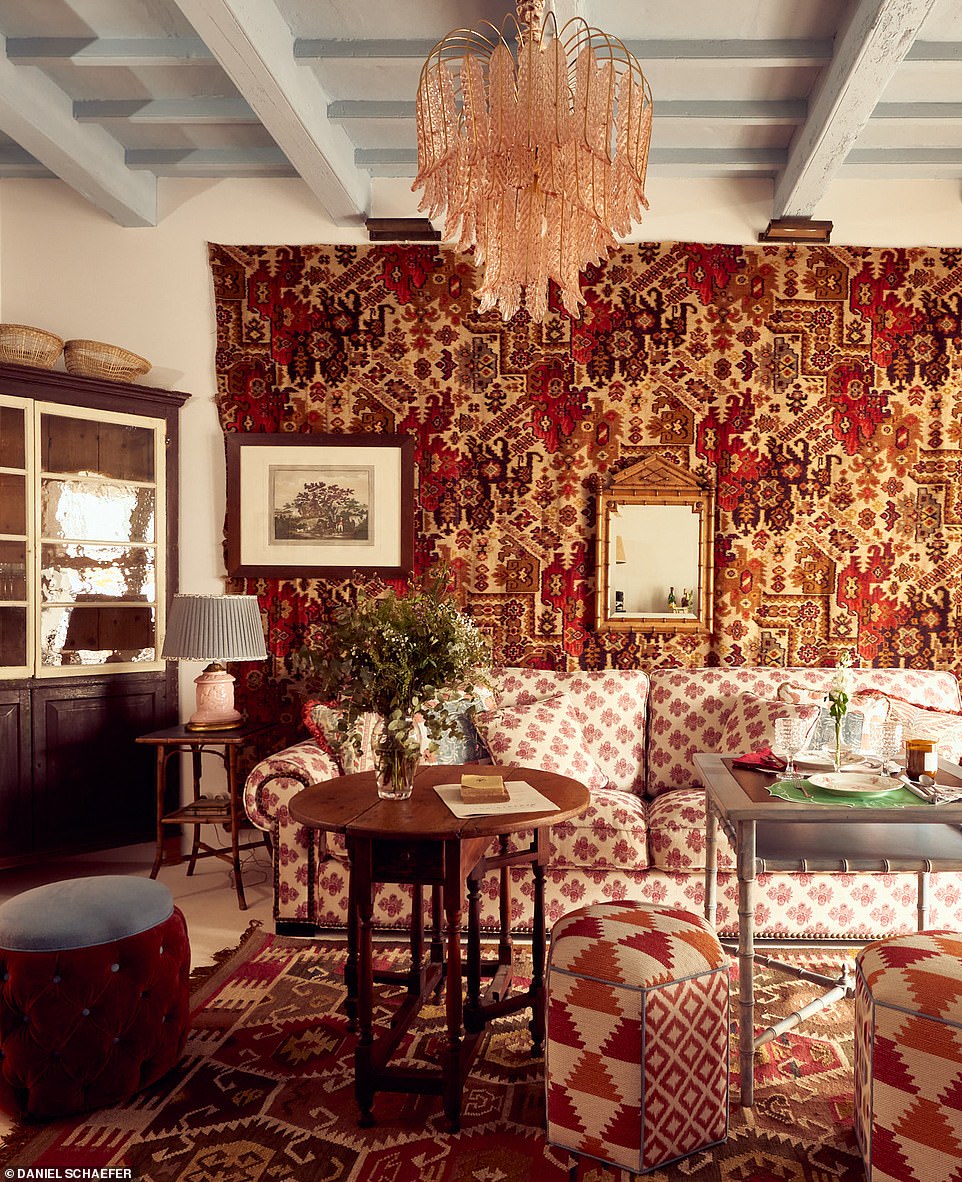 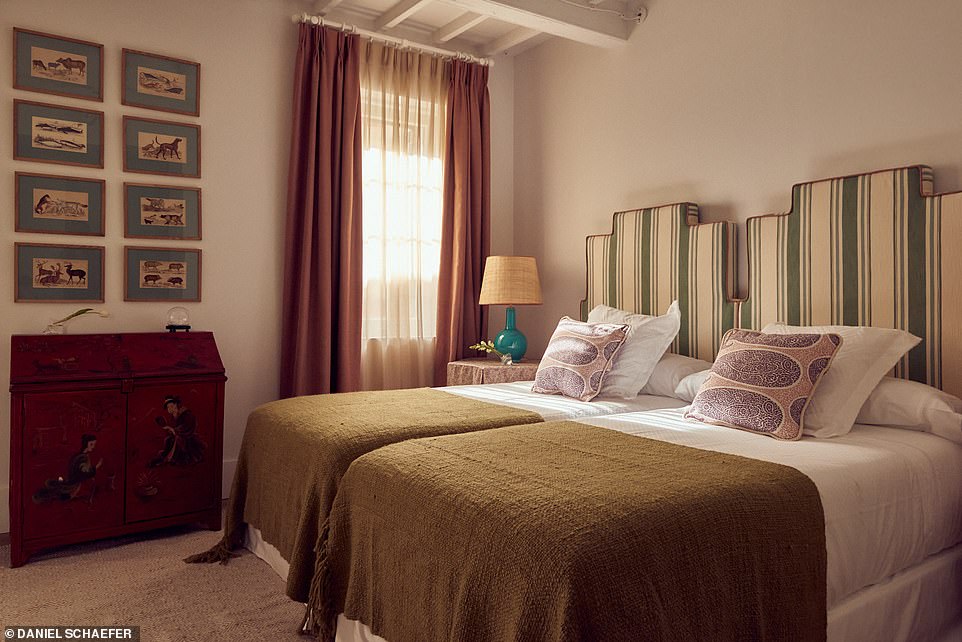 One of the Cristine Bedfor bedrooms. Harriet’s room has a free-standing bath and a terrace overlooking the garden

The most recent opening, however, is perhaps the city’s most exciting. Cristine Bedfor, a 26-bedroom hotel a five-minute walk away, feels like a Menorcan version of Soho House and is one of the most stylish places I’ve ever set foot in. Clashing prints, colours and fabrics mix with wicker furniture and kitschy crockery but somehow each room works incredibly well.

My bedroom is on the ground floor and comes with a free-standing bath (as well as a shower in the en-suite) and terrace overlooking the garden, packed with palm and cypress trees, local shrubs and a small walk-in pool.

Menorca has managed to retain its soul despite the demands of mass tourism. The Spanish dictator General Franco unintentionally had a lot to do with this — from 1939 until his death in 1975, he was determined to deprive the island of public building funds to punish it for resistance to his rule. So while sprawling hotels, nightclubs-that-never-close and concrete promenades were being erected using state money in Mallorca, Ibiza and mainland Spain, Menorca remained more or less untouched by modernisation. 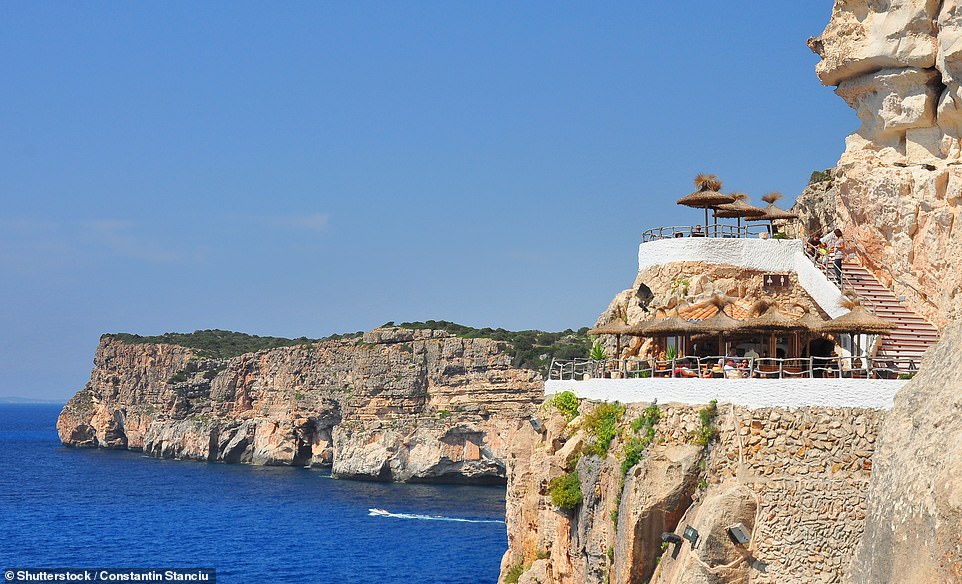 The spectacular Cova d’en Xoroi bar, pictured, is carved out of a cliff face in Menorca and offers stunning views of the Med

What you need to know…

The Balearic islands are currently on the UK’s ‘amber list’, meaning fully vaccinated travellers are not required to quarantine on return (but must take a pre-departure lateral flow test before returning to the UK and a ‘day two’ PCR test having returned to the UK).

British tourists are not required to isolate on arrival but must show proof of vaccination status or a negative PCR test.

Direct flights are running to Menorca until the beginning of November.

The Balearic Islands tourism board has extended its free Covid-19 insurance for all travellers until the end of the year (safetourism.illesbalears.travel).

The island is famous for having the world’s second biggest natural harbour and being the birthplace of both avarca leather sandals and mayonnaise.

Legend has it that the Duke of Richelieu’s chef couldn’t find the cream he needed for the victory meal after Menorca was conquered by the French in the 18th century, so instead whipped up a sauce of egg and oil, calling it ‘mahonnaise’ in honour of the capital.

But I’m more interested in its wine, which has been produced on the island since the 13th century. The ancient tradition became all but lost due to a catastrophic wine blight in the 19th century but vineyards have begun cropping up across the island once again.

I head to Torralbenc, a former farm with acres of vineyards and herb-scented hillsides, for an evening of wine and exceptionally good food (the culinary scene is wildly underrated here).

Whitewashed walls smothered in climbing bougainvillea glow orange with the last of the day’s scorching sun as inventive plates including avocado cream with sweet apple cubes are brought to my table.

And, of course, there’s the vino. And lots of it. I go for the farm’s Chardonnay, which dances in the mouth with its buttery richness. It’s so good I refuse to sample any other wines.

Later that evening, over a glass of Aperol spritz filled with giant ice cubes and orange slices, I get chatting to a local called Maria, who summarises what makes Menorca different from its Balearic sisters.

‘We have a saying here; people go to Mallorca to party, Ibiza to party and be seen, and Menorca to listen to their thoughts and enjoy.’

We are perched at a table at Cova d’en Xoroi, a labyrinth of terraces, bar rooms and dancefloors carved out of the plunging Menorcan cliffs. A light breeze trickles in from the sparkling Mediterranean which stretches out before us, while groups of ridiculously good-looking locals and clued-up tourists, mostly French, sip cocktails while tapping along to the rhythm of the DJ’s beat.

I ask Maria for tips on her favourite beaches. ‘Cala Mitjaneta or Cala Mesquida,’ she tells me. I’ve heard of them and have a feeling she might be fibbing. The locals are keen to keep some spots to themselves. And I can’t blame them.