At the European premiere of Mary Poppins Returns, director Rob Marshall, of Into The Woods, Nine and Oscar-winning Chicago fame, described this anxiously awaited sequel as ‘a love letter to London’.

Which is always a bit worrying coming from an American, and, sure enough, tourist landmarks such as Tower Bridge, Buckingham Palace and Big Ben all feature, the latter providing this undeniably gorgeous-looking musical with a vertiginously spectacular climax.

Describing it as ‘a love letter to the 1964 original’, however, is closer to the mark. Much-loved it may have been and responsible for turning Julie Andrews into a star, but the Robert Stevenson-directed production had its strengths and weaknesses and so, a mere 54 years later, does the sequel. 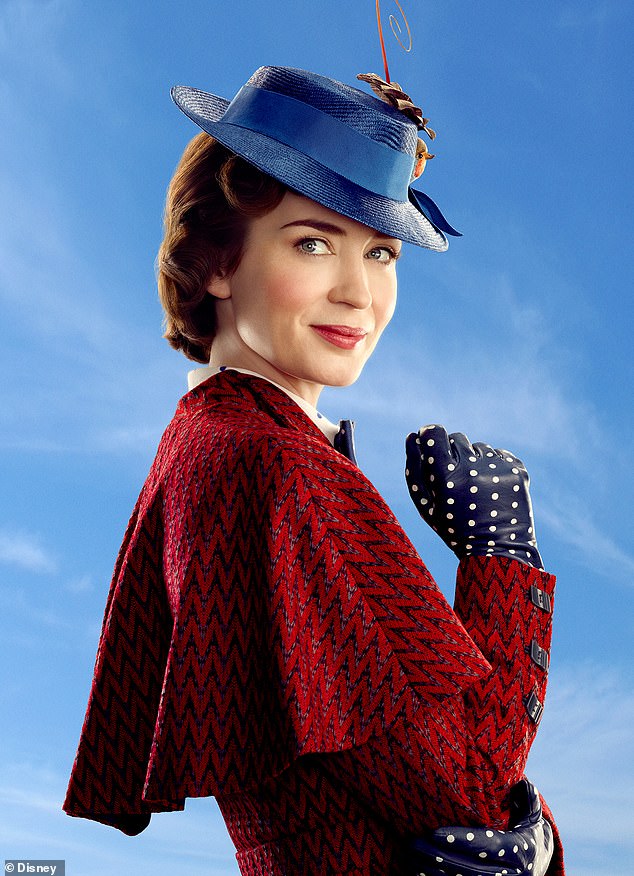 As Emily Blunt bravely floats to Earth under an umbrella and into the role made truly iconic by Julie Andrews, my admiration of her is immediately tested

Packed with song-and-dance numbers, animated fantasy sequences (yes, the waistcoat-wearing penguin waiters are back) and silly scenes that are fun but don’t feel they really belong (yes, you, Meryl Streep), this is a sequel that goes to great lengths to recreate the rhythm, style and magic of the original.

Anyone who saw Saving Mr Banks will know that Mary Poppins’s creator, the formidable P L Travers, would probably hate it just as she is said to have hated the first film. But millions of us loved that and I’m pretty sure, despite some obvious shortcomings, millions of us will love the sequel almost as much.

Ever since spotting her in My Summer Of Love back in 2004, I’ve been a huge fan of Emily Blunt but, as she bravely floats to Earth under an umbrella and into the role made truly iconic by Andrews, that admiration is immediately tested. Blunt’s clipped, frightfully posh English accent is extraordinary.

Andrews’s Poppins may have been strict but her voice was all sweetness and nicely spoken light. Blunt, by contrast, sounds like a cross between Celia Johnson in Brief Encounter and Penelope Keith from TV’s To The Manor Born, although in her defence it does help with moments of comedy, is probably closer to the character that P L Travers had in mind, and barely affects her unexpectedly lovely singing at all. 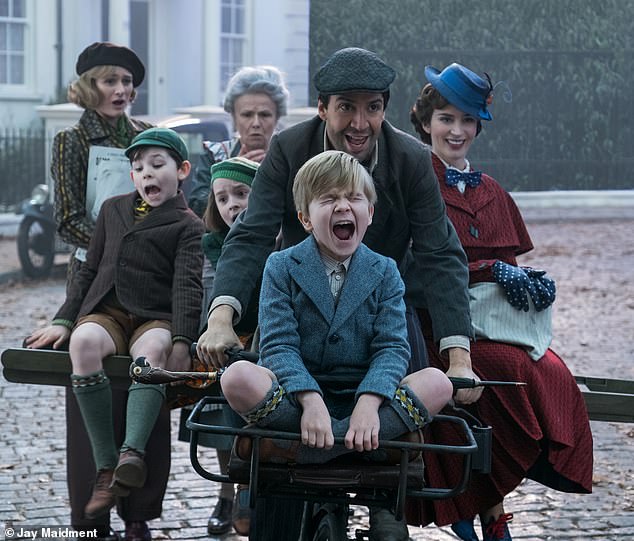 But it is jarring in a film otherwise going all out for continuity, with Dick Van Dyke returning at the age of 93 to reprise (well, almost) one of his roles (he wasn’t just Bert the chimney sweep) in a sweet, funny and immensely touching cameo, while Angela Lansbury (two months older than Van Dyke) takes on a small role I’m sure the producers must have been desperately hoping Andrews herself would play.

The film is set some three decades after the turn-of-the-century original amid ‘the great slump’, and No 17 Cherry Tree Lane has seen many changes.

Mr and Mrs Banks are dead and the house is now occupied by their artistically inclined son, Michael (Ben Whishaw), his three young children, and cook and housekeeper Ellen (Julie Walters, essentially reprising her performance as Mrs Bird in Paddington).

His supportive sister, Jane (Emily Mortimer), is a constant visitor, which makes more sense once we discover that Michael’s wife died a year earlier. But that’s not the end of his woes, as Cherry Tree Lane is threatened with repossession by the very bank that employed his father and now employs him. 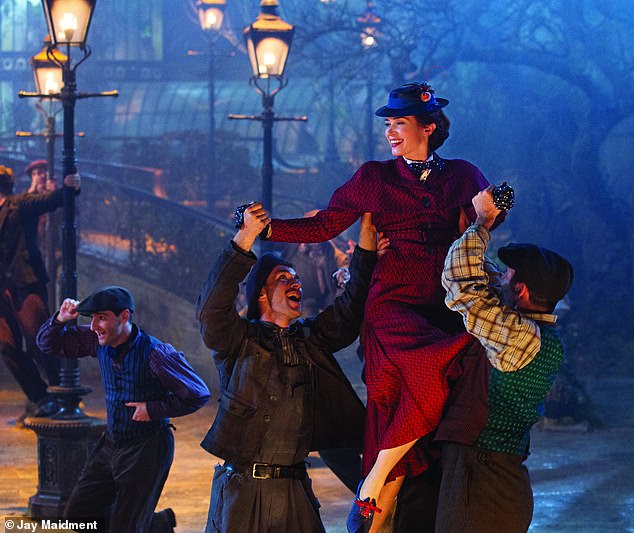 Tourist landmarks such as Tower Bridge, Buckingham Palace and Big Ben all feature, the latter providing this undeniably gorgeous-looking musical with a vertiginously spectacular climax

Brother and sister are both pretty sure their father left them some valuable shares. If only they could find the certificate…

Maybe nice Mr Wilkins (Colin Firth) at the bank could help. But who’s going to look after the children while all this grown-up stuff is going on? We all know the answer to that last one.

Even for a family musical, it’s a paper-thin plot and rather clumsily handled by Marshall, who is definitely a song-and-dance man at creative heart rather than a stickler for screenplay.

A Mary Poppins sequel has been in gestation since 1965 – but the character’s creator, P L Travers, blocked all attempts during her lifetime.

Here, he clearly has one eye on the stage musical this could so easily become and, indeed, is halfway there with the casting of Hamilton creator and star Lin-Manuel Miranda as Jack the lamplighter, who is to the sequel what Bert was to the original.

It’s a brave bit of casting given Miranda’s lack of big screen experience. But he does have a better accent than Van Dyke’s crucified cockney – and, praise be, doesn’t milk the word ‘lovely’ for a third syllable in the song (Underneath The) Lovely London Sky.

The songs, by Marc Shaiman and Scott Wittman, may not have the magic of Sherman Brothers classics such as Feed The Birds, Supercali… but they’re clever and catchy and may improve with repeat viewing.

The animation (if we’ve got to have it) is lovely, Meryl Streep is magnificently over the top as Cousin Topsy and, despite the lack of the original’s genuine pathos, if adults aren’t wiping away a tear or two by the end I’ll be very surprised.

Trip A Little Light Fantastic, as one of the new songs says? Don’t mind if I do.

Charlie Hunnam is not one of my favourite actors, but he does his reputation no harm at all in this perfectly proficient but pointless-feeling remake of the 1973 prison classic starring Steve McQueen and Dustin Hoffman.

Both films, of course, are based on the 1969 memoir of the French criminal Henri Charrière, nicknamed Papillon after the butterfly tattoo adorning his chest.

The new version really isn’t bad, helped by a convincing sense of place, decent production values and a terrific supporting performance from Rami Malek, who recently shot to fame as Freddie Mercury in Bohemian Rhapsody. 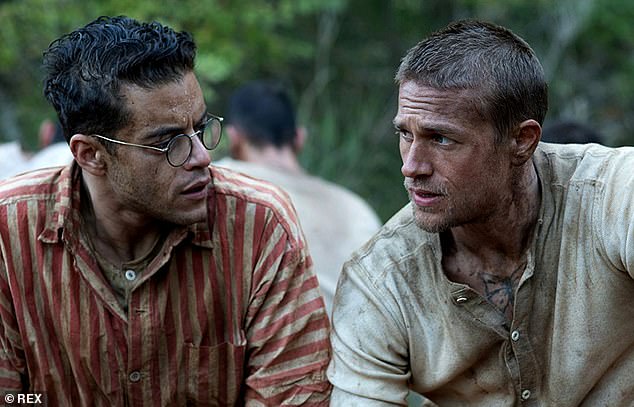 Charlie Hunnam (right) is not one of my favourite actors, but he does his reputation no harm at all in this perfectly proficient but pointless-feeling remake of the 1973 prison classic

He plays Dega, the wealthy but vulnerable forger who becomes Charrière’s friend, the part that Hoffman played in the original.

The whole thing is played out in American accents, which is fine but, as with the McQueen version, it is a little hard to care about the characters in a film where the escapes are the real focus and the fun and frills of Thirties Paris are soon replaced by prison beatings, public executions and long periods of solitary confinement.

Just as our patience is in danger of wearing thin, however, five years of solitary suddenly pass in a few seconds of a fade-to-black screen – the cinematic equivalent of the blinking of an eye – and, for such small mercies, we must be grateful.