A new sculpture celebrating the ‘mother of feminism’ has been slammed amid claims the artwork has reduced her ‘to a naked silver Barbie doll’.

Campaigners have been working to install a statue in memory of the 18th century feminist Mary Wollstonecraft for a decade.

They finally decided upon a 10-foot design by artist Maggi Hambling that is to be officially unveiled this evening in north London.

And although supporters may have expected the statue to depict Wollstonecraft herself, it is instead a statue ‘for’ Mary Wollstonecraft rather than of her, as Hambling has been keen to point out.

But dozens of people have criticised the £143,000 sculpture – depicting a tiny silver female figure emerging naked from a ‘swirling mingle of female forms’.

Katherine Faulkner said on Twitter: ‘So incredibly upset by this sculpture of Mary Wollstonecraft.

‘Was so excited there was going to be a statue of this great woman on the green where my two daughters play. 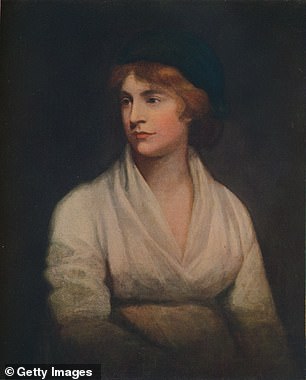 Mary Wollstonecraft wrote the groundbreaking 1792 treatise A Vindication of the Rights of Woman as well as creating a boarding school for girls, now Newington Green School, aged 25

‘Why has she been reduced to a naked silver barbie? It’s so depressing.’

‘Women’s bodies are now objectified on a rampant scale. So I think it’s a mistake to have feminist Wollstonecraft represented naked, no matter how naturalistically.’

Another Angry Woman wrote: ‘OK so the statue of mary wollstonecraft is up and… for some reason she is naked and absolutely tiny and doesn’t look anything like her?????

And Dr Laura Wood fumed: ‘How many of our important male writers are depicted naked in their statues? You never see Charles Dickens with his balls out, do you?’

Artist Maggi Hambling has hit back at criticism aimed at the sculpture, saying they had confused Wollstonecraft with the figure in the work. 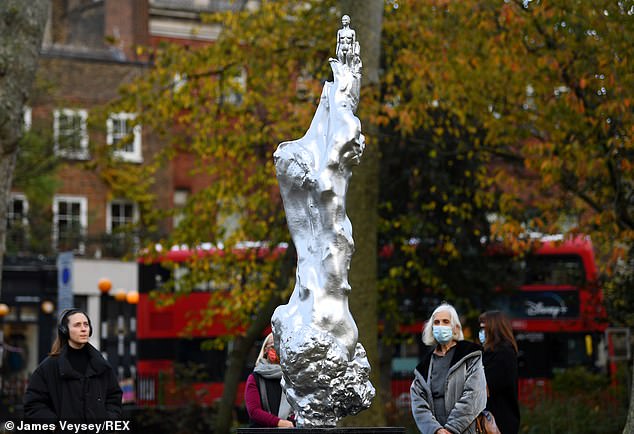 Dozens of people have criticised the £143,000 sculpture – depicting a tiny silver female figure emerging naked from a ‘swirling mingle of female forms’ 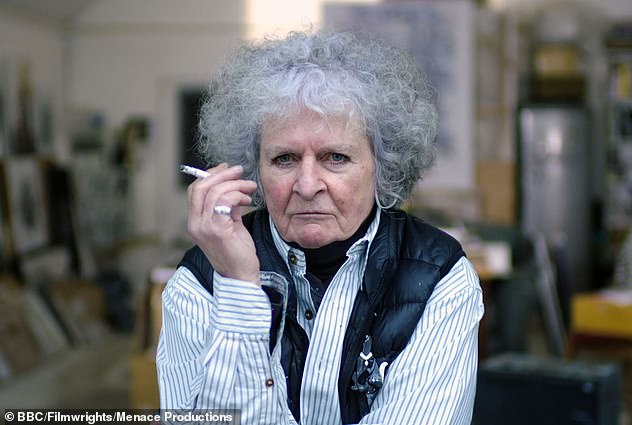 Artist Maggi Hambling has hit back at criticism aimed at the sculpture, saying they had confused Wollstonecraft with the figure in the work

‘Clothes define people – as she’s everywoman, I’m not defining her in any particular clothes,’ she said.

Wollstonecraft wrote the groundbreaking 1792 treatise A Vindication of the Rights of Woman as well as creating a boarding school for girls, now Newington Green School, aged 25, near the site of the new statue in north London.

She was a philosopher, writer and strongly advocated for women’s rights, arguing women only seemed inferior due to their lack of education and opportunities.

She died aged just 38 having given birth to Mary Wollstonecraft Shelley, who wrote the gothic novel Frankenstein, or the Modern Prometheus.

Writer Bee Rowlatt, who led the Mary on the Green campaign said she expected the form to ‘start a conversation.’

She added: ‘It will definitely promote comment and debate and that’s good, that’s what Mary did all her life.

‘To have finally a public work of art that celebrates human rights * it is a very public statement at a time of increasing societal division.

‘People haven’t heard of Mary Wollstonecraft and when you discover more about her, that is actually quite astonishing.’

Artist Maggi, best known for a sculpture of Oscar Wilde unveiled near Trafalgar Square in 1998, said of her creation: ‘This sculpture encourages a visual conversation with the obstacles Wollstonecraft overcame, the ideals she strived for, and what she made happen.

‘A vital contemporary discourse for all that is still to be achieved.’

TV presenter Anita Rani, who supported the campaign, added: ‘She was someone who just never gave up, she always fought for others, she was a badass – and it cost her.’

Former Labour leader Jeremy Corbyn previously called for a statue of her to be put up, calling her his ‘hero’.

Helen Pankhurst, great granddaughter of Emmeline Pankhurst from the Suffragette movement, added: ‘Congratulations to all who made it happen.’

It is believed that more than 90 per cent of the statues in London portray men.

Mary Wollstonecraft: The ‘mother of feminism’ and a pioneer of women’s rights and education 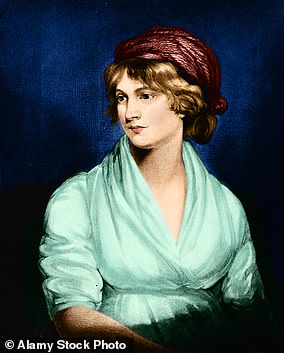 Mary Wollstonecraft was born into a prosperous family in Spitalfields, London on 27 April, 1759.

But during her childhood her father, a drunk, squandered the family money. Along with her mother and siblings, she often suffered abuse at his hands.

As a woman, Wollstonecraft received little formal schooling but she set out to educate herself.

In order to make a living, Wollstonecraft and her sisters joined family friend Frances Blood to set up a girls’ school together in Newington Green.

In 1788, she became a translator and an adviser to Joseph Johnson, a noted publisher of radical texts.

At age 33, Wollstonecraft wrote the ground-breaking treatise A Vindication of the Rights of Woman (1792).

The book set out her abhorrence of the notion that women are inferior and that they only exist to serve the domestic needs of a household.

She proposed that this was only the case because women were given an inferior education and put forward the idea of reform.

Wollstonecraft called for men and women to be given the same access and opportunities for education – a notion that was truly revolutionary at the time and caused tremendous controversy.

She mixed with the intellectual radicals of the day – debating with Benjamin Franklin, Thomas Paine and Joseph Priestley and went on to write Maria, or the Wrongs of Woman – a work which argues that women have strong sexual desires and that it is immoral to suggest otherwise.

Wollstonecraft died aged just 38 just days after giving birth to her second daughter Mary Wollstonecraft Shelley, who went on to write the Gothic novel Frankenstein as well as Mathilda.