Maryland Mom charged with attempting to decapitate her autistic son, 11, with a bow saw

Kristina Petrie, 46, of Maryland was charged with attempted first-degree murder and child abuse after she allegedly tried to decapitate her autistic son, 11, with a bow saw

A Maryland woman is accused of using a bow saw to try to decapitate her autistic 11-year-old son.

Kristina Petrie, 46, of Aspen Hill, Maryland was charged with attempted first-degree murder and first- and second-degree child abuse after her son, 11, told police that she held a bow saw against his neck and cut him with it.

The incident occurred on March 12 at the Petrie home, after the 11-year-old arrived home from school, according to a court document obtained by ABC7.

The boy, who has not been named, told police that when he entered his home, he saw his brother crying on the couch. He said his mother, Kristina, was crying and laughing.

The 11-year-old then said he went upstairs to play a game, at which point Kristina, holding a bow saw, approached him and asked why he wasn’t doing his homework yet. The boy said that he would start his homework at 4.45pm.

The boy said that Kristina then raised the bow saw and blocked him from leaving the room. He said he wound up in a kneeling position and Kristina ‘jammed’ the bow saw against his neck, dragging it back and forth several times.

He told police that Kristina — described as being 5’6″ tall and weighing 175 pounds — ‘tried to kill’ him and that he screamed. He said that Kristina was screaming and crying as well.

The boy said he was able to wrestle the saw away from his mother and escape from the room. He said his neighbor came over to the house and then his father, Andrew Petrie, returned home.

Andrew then took Kristina to the hospital. 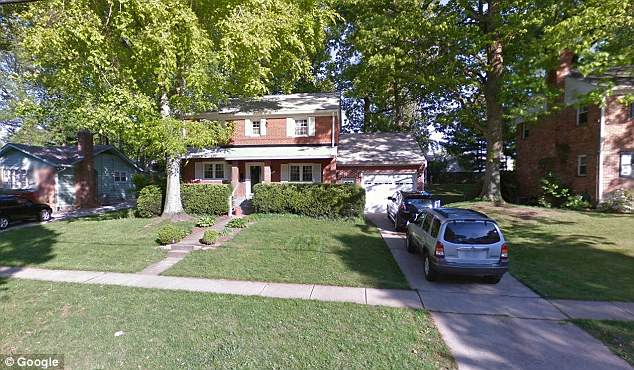 The incident took place at the Petrie home after the 11-year-old returned from school, according to court documents on March 12 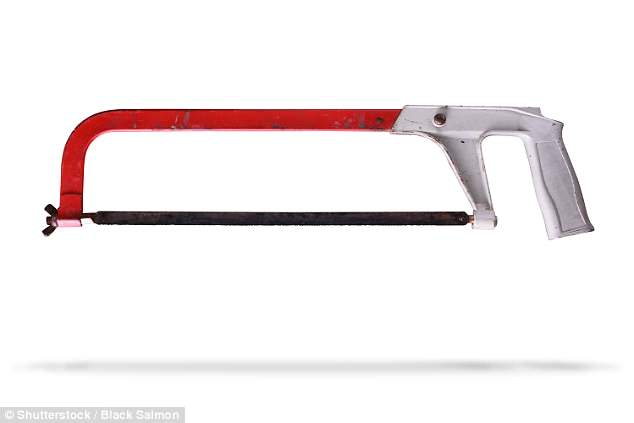 The boy, 11, told police that his mother, Kristina, ‘jammed’ a bow saw against the back of his neck and dragged it back and forth several times before he was able to escape (stock pic) 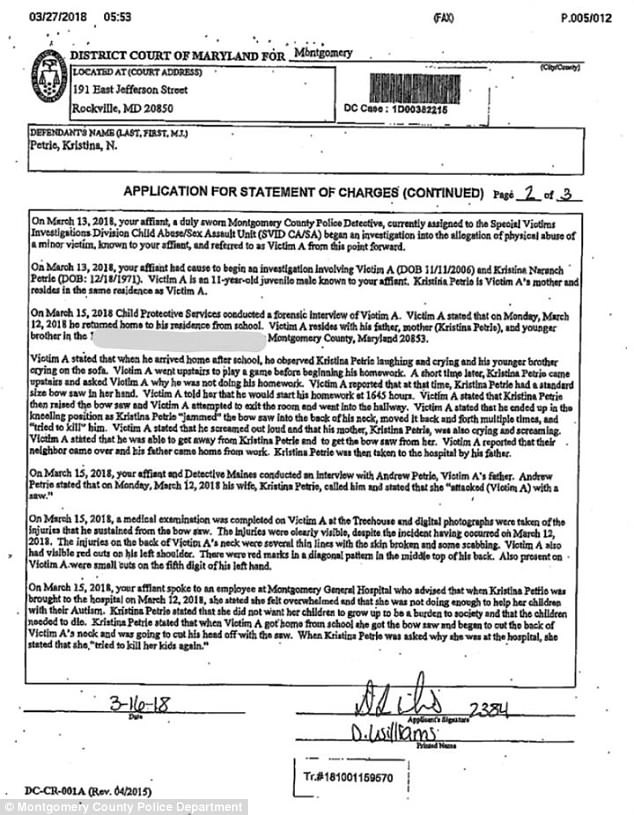 Kristina’s charging document revealed that she allegedly attacked her son with a bow saw because he wasn’t doing his homework. A hospital worker claimed that she said that she was concerned that her children would be a ‘burden on society’ and ‘needed to die’

When interviewed by police on March 15, Andrew said that Kristina had called him and confessed that she had ‘attacked’ their son with a saw.

That same day, a medical exam and photographs of the 11-year-old revealed that the boy’s injuries were still clearly evident, even though three days had passed since the alleged attempted beheading.

Police said that there were ‘several thin lines with the skin broken and scabbing’ on his neck. The boy also had cuts on his shoulder and hand, as well as red marks on his back.

Staff at the hospital where Andrew took Kristina after the incident said that she told them that she felt ‘overwhelmed and that she was not doing enough to help her children with their autism.’

When the staff member asked why Kristina had been brought to the hospital, she said that she had ‘tried to kill her kids again,’ according to the court document.

A judge decided that Kristina should be held without bond on Tuesday.

Kristina’s defense attorney, Sharon Diamant, told NBC Washington that Kristina did not have a criminal history.

‘We do not believe she intended to hurt her children,’ Diamant said. ‘Her husband and her kids love her very much.’

Diamant did not comment on whether Kristina suffered from any mental health issues.

Kristina’s next court date is set for April 20.

If found guilty, she could be sentenced to up to life in prison for the first-degree attempted murder charge, plus a combined 40 years maximum for the two child abuse charges.