A brazen burglar’s photo outside the home of Leicester City boss Brendan Rodgers may well lead the police straight to his door.

Clad in a black balaclava, it is obvious that the bungling criminal is at Mr Rodgers’s £1.6 million Glasgow home as his wedding photo is in the background.

Police in Scotland are now studying the photo for clues to help them to identify the gang behind the robbery.

The photograph has been circulating on social media just hours after Mr Rodgers’s family home was ransacked by raiders.

In the image the black-clad crook is outside the Glasgow home while it is pitch black outside while a wedding photo that was shared widely online can be seen behind him.

Ex-Scotland Yard detective David Videcette told the Sun: ‘It’s a massive own goal by this criminal.

‘Once the police circulate that image, I’m fairly confident that somebody will come forward, either a police officer who has previously dealt with them or someone who knows them.’

At around 2am on Wednesday morning his wife Charlotte, 35, and six-year-old stepdaughter Lola locked themselves in the bathroom as the gang took items from the home.

After leaving Celtic late last month for Premier League club Leicester City, Mr Rodgers has been based in the Midlands rather than Glasgow.

When Charlotte was unable to get hold of her husband by phone she hit a panic button in the Glasgow home to alert police of the break in.

The thieves managed to swipe medals and trophies from Mr Rogers’s successful stint as Celtic manager. 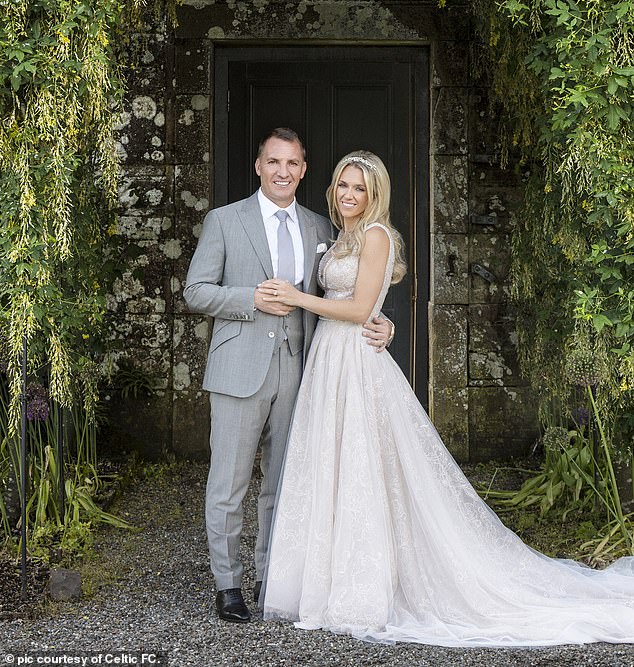 Brendan Rodgers with his wife Charlotte on their wedding day at Loch Lomond golf club on June 9, 2017

Later last week removal men were seen helping to pack up belongings as it is thought that Mr Rodgers’s family are moving to be closer to him in his new job.

Speaking after the raid, Mr Rodgers said: ‘We are looking to buy a house here in Leicester and they will move down very soon.

‘One of our friends, Lord Willie Haughey, I rang him straight away and he was straight on to making sure Charlotte and Lola were secure. I thank him for that.

‘We’ve dealt with it, we’ve had lots of support

‘For the girls to have someone come into the room, it’s horrendous really.

‘When I got the call in the early hours of the morning you’re worried about their safety.

‘It’s not nice for any family to go through. It gave the girls a fright.

The couple married in 2017 in a fairytale ceremony at Loch Lomond golf club.

Police Scotland are continuing to investigate the burglary in the Glasgow suburb.

A spokesperson said: ‘We have been made aware of an image in relation to an ongoing investigation. Enquiries will be carried out. Anybody with information is asked to contact police.’

In the past few years a number of football stars’s homes have been targeted by thieves.

Former West Brom midfielder James Maclean’s house was burgled while he was playing for his side against West Ham United last January.