Terrifying video footage has emerged showing a balaclava-clad knifeman swinging a foot-long blade at two police officers while they struggle to Taser him.

The shocking machete attack, which took place in broad daylight in Croydon, south London, shows the masked man hacking and swiping away at the two officers who at try but fail to Taser him.

The knifeman looks to have escaped arrest after the failed Taser stike, but a second officer then appears to stun the attacker with his pepper spray.

The thug circles around before eventually falling over yards from a motorcycle lying on the ground – as a member of the public rushes over to help.

The Metropolitan Police said a man, aged 23, was arrested and charged following the incident in Cherry Tree Green.

The shocking machete attack, which took place in broad daylight in Croydon, south London, shows the masked man hacking away at two cops who first fail to Taser him 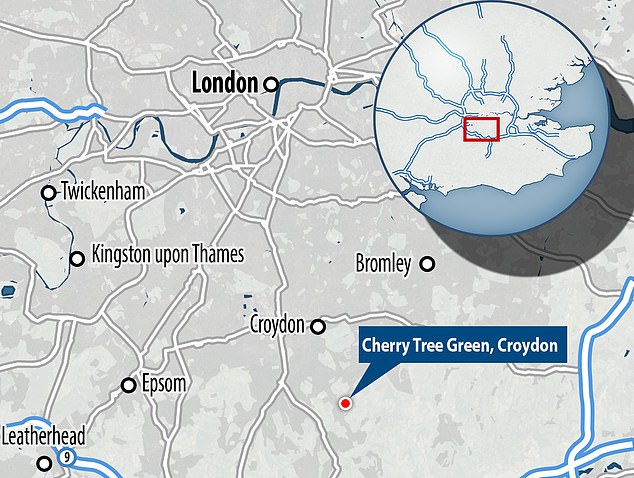 The shocking incident took place in Cherry Tree Green, Croydon, at around 10am on Thursday, December 30

The video was shot by roofer Robert Ball, 31, in Croydon, south London on December 30, at around 10am.

In the short clip, the knifeman is shown hitting out at one cop, who is desperately holding onto his legs.

The officer tries, and fails, to Taser the perpetrator, who swings away at the 50,000v device as if it is little more than a fly before raining down more blows on the cop.

He then is seen circling round and pulling out a large black object, seemingly prompting the other officer to use spray while talking on his radio. 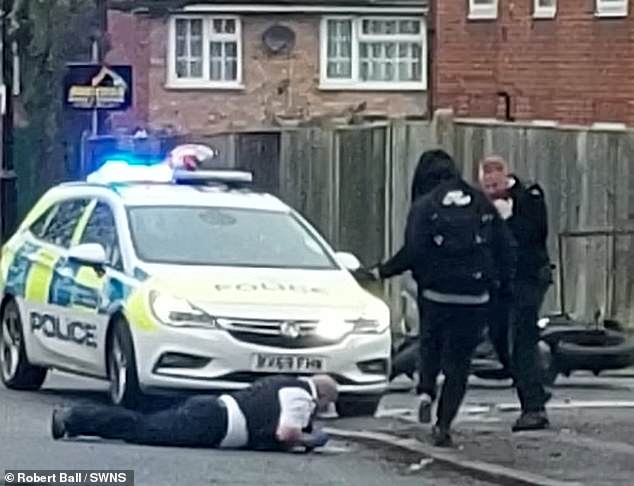 In the short clip, the knifeman is shown hitting out at one cop, who desperately tries to grab hold of his legs 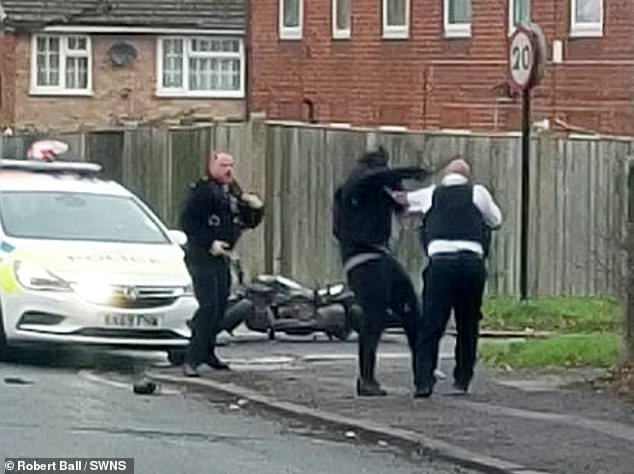 The officer gets back to his feet, but faces further blows from the balaclava-clad knifeman (right) 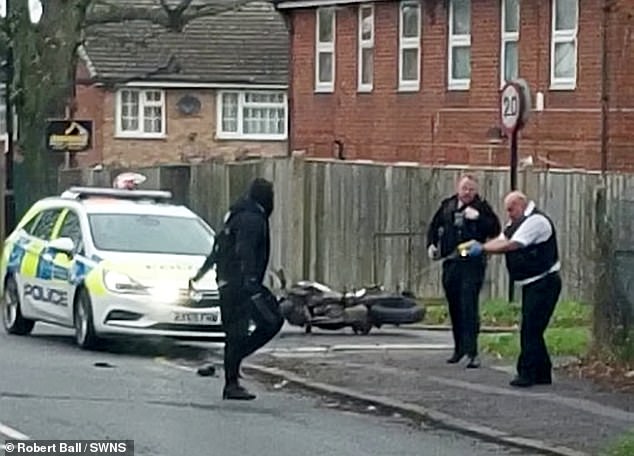 The officer tries, and fails, to Taser the perpetrator, who swings away at the 50,000v device as if it is little more than a fly before raining down more blows on the cop

Two officers were injured, the Met confirmed – with one suffering a concussion and another a suspected fracture.

Eyewitness Mr Ball said: ‘I was really shocked when I realised it was a knife. He was trying to unsheathe it.

‘The blade must have been as long as your forearm. I was like, “what the hell!”. I live in the area. It doesn’t feel very safe.’ 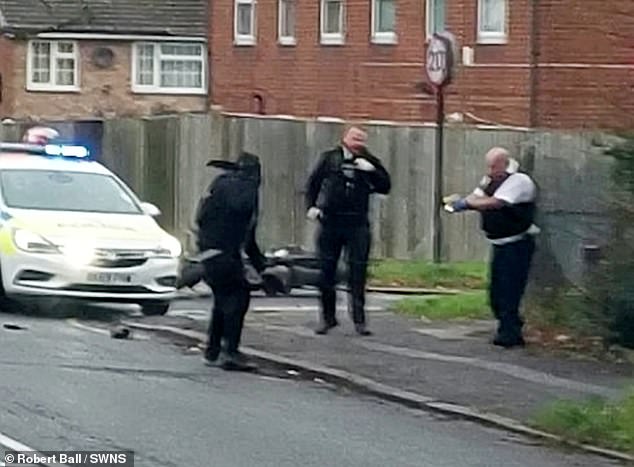 A spokesperson for the force told MailOnline: ‘At around 10:00hrs on Thursday, 30 December officers from the Met’s South Area Command Safer Transport Team stopped a man riding a motorcycle at Cherry Tree Green, Croydon.

‘The man, aged 23, became violent during the stop. He was detained following Taser deployment.

‘A knife was recovered at the scene.

‘A 23-year-old man has been charged in connection with the incident.

‘Anyone who either witnessed or has footage of the incident should email p232991@met.police.uk, call police on 101 or tweet @MetCC quoting 1096/30DEC.’ 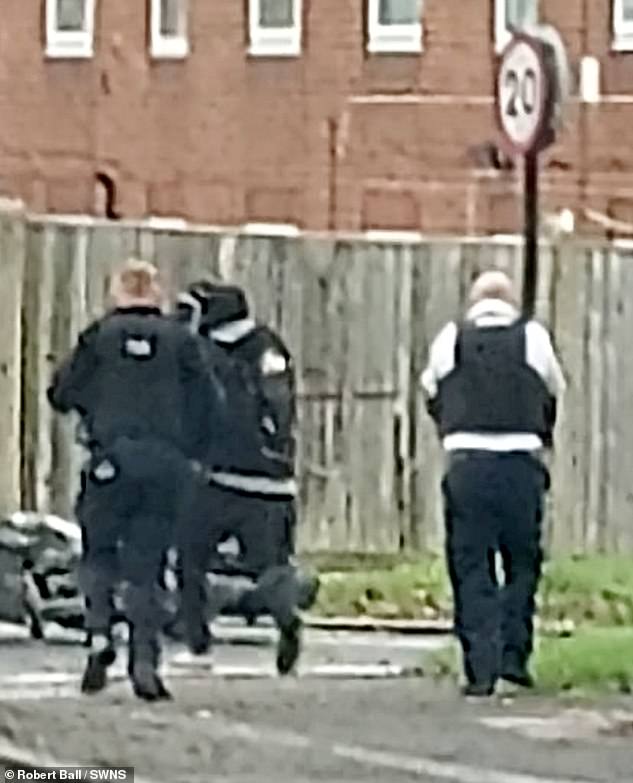 It looks as though the knifeman will pull off a dramatic escape, but his plans are foiled by a second officer who appears to use incapacitant spray to stun the attacker

London’s teenage murder toll has hit a record high of 30 killings last year after two boys, aged 15 and 16, were killed within minutes of each other on December 30 – the same day as the machete attack in Croydon.

Police were called at 7.34pm that day to reports of an injured male in open farm space in Hillingdon, west London. Officers attended and found a 16-year-old boy suffering from a stab wound. Despite the efforts of paramedics, he was pronounced dead at the scene at 8.25pm.

The incident occurred minutes after a 15-year-old boy was stabbed to death during an assault in Ashburton Park in Croydon.  Police officers gave first aid to the boy before the ambulance service arrived but he was pronounced dead at 7.36pm.

The brutal new high of deaths among London’s young people will inevitably heap more pressure on Mayor Sadiq Khan to seize control of the gang and stabbing epidemic sweeping the capital’s streets.

Anti-knife crime campaigners warned not enough was being done to tackle the problem as they criticised what they called London’s ‘scattergun’ approach.

Did you see what happened? Email stewart.carr@mailonline.co.uk