Dramatic CCTV shows how a brave shopkeeper fought to defend his store during a knife-point robbery by three armed men.

The masked thugs entered the Spar store on Laceby Road in Grimsby, Lincolnshire, at around 10.15pm on Wednesday 19 December.

The gang pulled out large knives and threatened shop owner Mahalingham Gopithas, demanding he hand over cash and cigarettes, and left him with cuts on his hands and neck.

Security footage shows how one of the men hopped over the counter, before pulling a knife on Mr Gopithas who tries to knock the man back.

The brave shopkeeper then tries to pull the knife away from the attacker but then decides to open the till as he moves out of the camera’s view before being seen again on the other side of the counter.

Two men hold Mr Gopithas in place and move towards the door but stumble, bringing the shop owner crashing to the ground with the knives still pressed against his stomach.

Mr Gopithas still tries to escape the men’s grasp and manages to crawl around onto his hands and knees – all while the two men hold knives close to him.

The men then push the shopkeeper as the third fills up a bag with cigarettes.

As the three men leave, stealing £350 in cash and £4,000 worth of cigarettes, one of them aggressively pushes Mr Gopithas before they rush out of the door.

Mr Gopithas, who has owned the Spar shop for the past seven years, said he immediately called the police and was awake most of the night afterwards as he couldn’t sleep due to the shock. 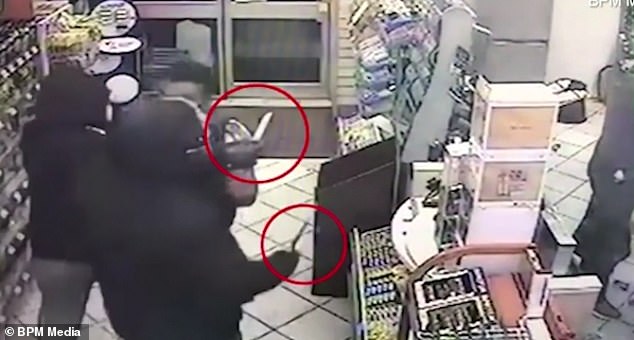 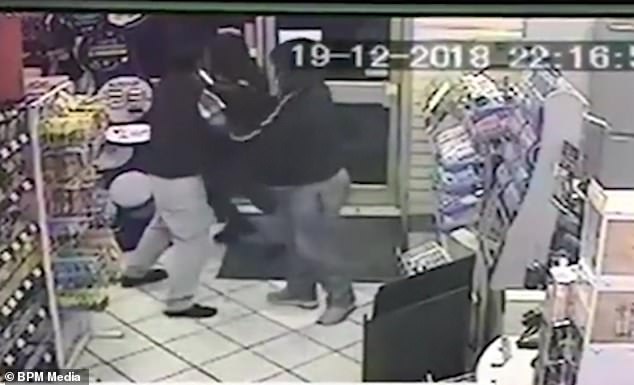 Despite that, he managed to make it into work the next day and run the shop.

Mr Gopithas said: ‘I have run this shop for the past seven years and I have never had something like this happen to me before. Normally I get lovely customers in here and everyone is very nice.

‘Wednesday night though was a different story. Three men came into the shop and held knives to my neck and body while they robbed me.

‘At first I tried to resist a bit, as I thought that only one of the men had a knife, and tried to move it away from me when he was threatening me.

‘Then the other two came behind the counter and started thrusting their knives at me, when I realised that it was simply not worth putting up a fight and opened the till for them.

‘When three men are threatening you with knives to your neck there is no point in fighting back, you will just end up getting very badly hurt or worse.

‘I have ended up with cuts to my hands and neck from the men threatening me with the knives, and I couldn’t sleep all last night thinking about it. 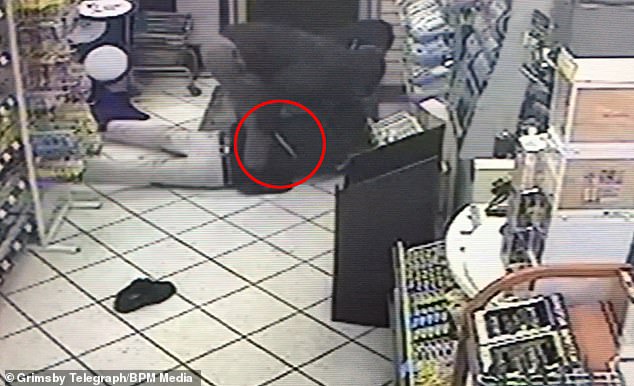 Mr Gopithas is pinned to the floor by the two men but still tries to escape, managing to spin around onto his hands and knees during the struggle 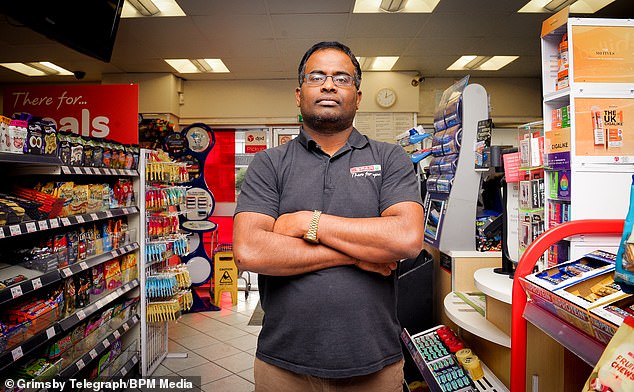 ‘I know that I recognise one of the men, and I have spoken to police in length about what has happened.

‘It still has not put me off working though, and I have opened up the shop again today for my customers.’

One man has been arrested following the incident, and police are now appealing for help to track down the other two.

A Humberside Police spokesperson said: ‘A man has been arrested following an alleged robbery at a shop in Grimsby.

‘Three men walked into the store on Laceby Road around 9pm on Wednesday 19 December and threatened a member of staff before making off with an amount of money and cigarettes.

‘The member of staff received minor injuries. We are now looking for two other men in connection with this. Can you help?