Disneyland Paris opened its doors for the first time in four months today with compulsory masks, socially-distanced queues and hundreds of hand-washing stations scattered around the park.

The theme park closed on March 12 as the coronavirus pandemic started to spiral out of control in Europe, but began its ‘phased re-opening’ today with visitor numbers limited by an online reservation system.

A steady stream of visitors trickled in during the morning with some wearing Mickey Mouse ears as they entered Europe’s most visited theme park, but some rides remain closed while playgrounds and make-up workshops are also out of action.

Paris has also re-opened the top floor of the Eiffel Tower today as France tries to revive its £50billion tourism industry after the lockdown.

British tourists can now travel to France again without facing a 14-day quarantine, after the French government lifted the measure in response to the UK easing its own travel restrictions. 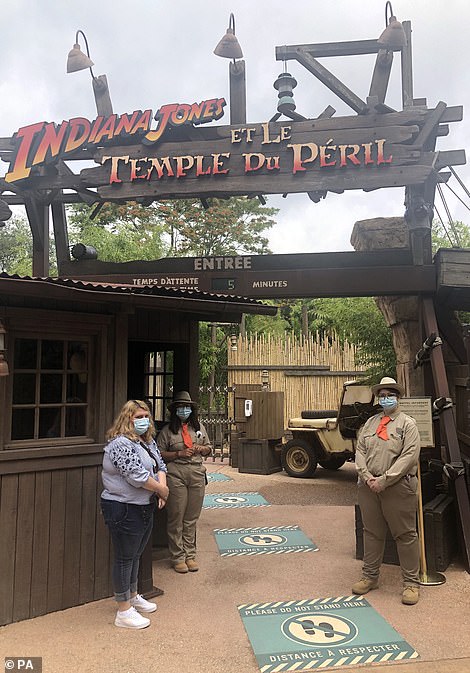 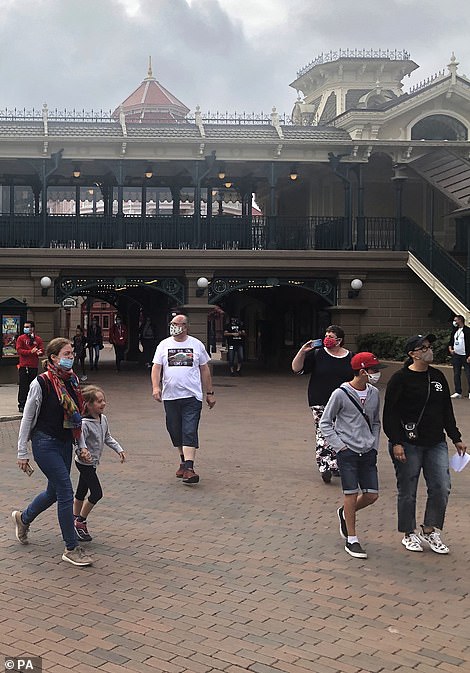 Pictured left: Disneyland staff wearing masks stand by the entrance of an Indiana Jones-themed ride, with spaces marked out for people to queue at a social distance. Pictured right, guests begin to enter the park today 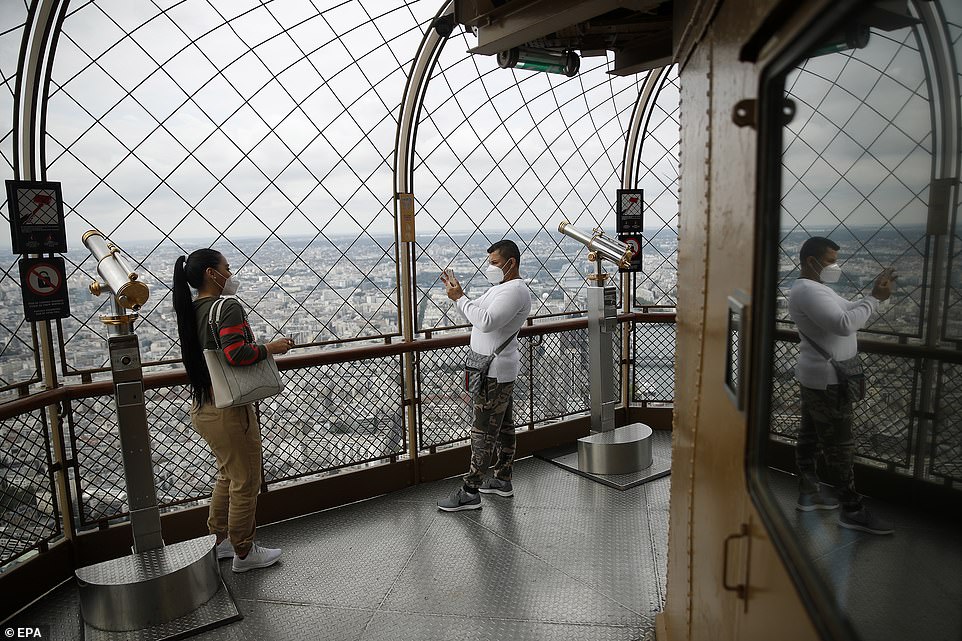 Visitors wearing masks take a picture on the top floor of the Eiffel Tower, which re-opened today after the two lower floors started welcoming tourists again on June 25

Disneyland says that no entrance tickets will be sold on site – meaning that tourists will have to choose a date and register in advance.

Social distancing means that children will be banned from hugging their favourite Disney characters, although the entertainers will still be at the park.

Visitors were told to keep a metre away from others, and Disneyland says that more than 2,000 sanitising-gel and hand-washing stations are scattered around the resort.

These will be located at the entrance and exit to each ride as well as at restaurants and theatres, although some shows will be cancelled to remain social distancing.

Guests aged 11 or over will have to wear face coverings ‘at all times except when eating’, with the same rule applying to staff.

Some rides including an Indiana Jones-themed attraction had signs marked out on the ground to indicate where people should queue to maintain social distancing rules. 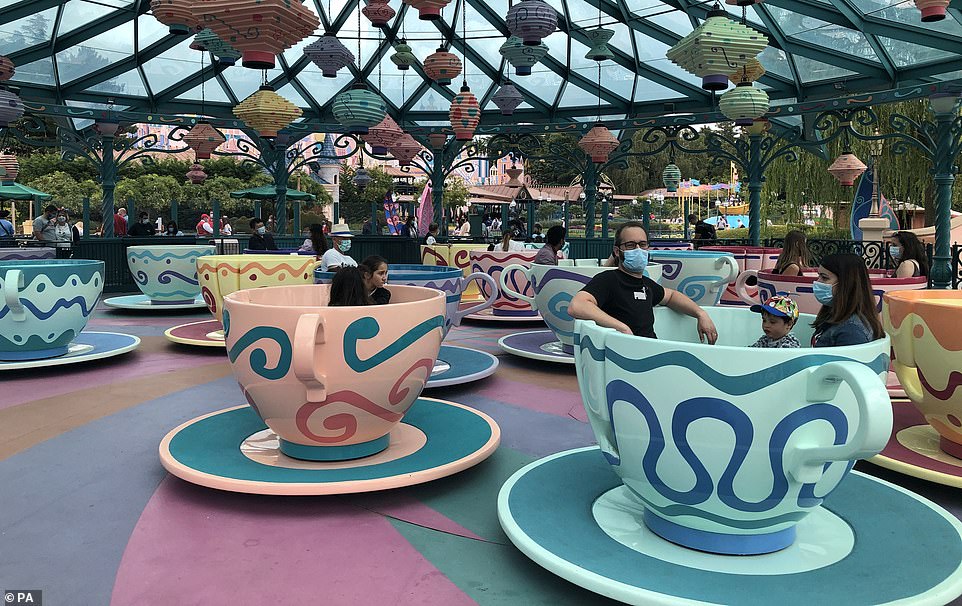 Guests ride the Giant Teacups at Disneyland Paris, which closed its doors on March 12 as coronavirus cases spiralled out of control in Europe. Masks are compulsory for adults but not for children under 11 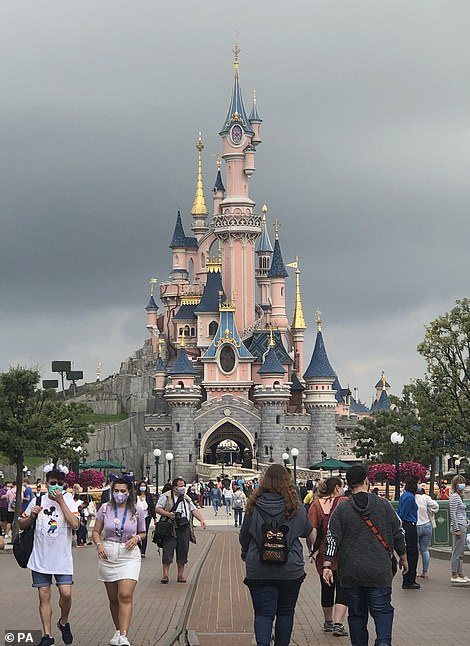 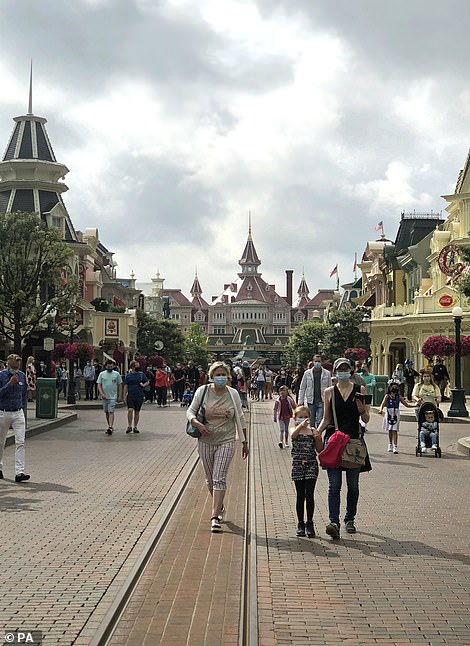 Disneyland Paris guests walk around the park today as a steady stream of visitors trickled in during the morning, having booked online because no tickets are being sold at the entrance under coronavirus rules

Walt Disney World opened much of its Florida complex on Saturday despite a surge of new infections in the state, while Disneyland Hong Kong has shut its doors again.

The second shutdown in the Chinese-controlled city followed a decision to ban public gatherings of more than four people to combat a new surge in infections.

The French tourist industry received a further boost Wednesday with the re-opening of the top floor of the Eiffel Tower, which had re-opened the two lower floors on June 26 after its longest closure since World War II.

Eiffel Tower officials have said a maximum of 250 people will now be allowed at the top floor at a time to enjoy the panoramic views of the French capital.

Tourism officials say that Paris normally brings in over 30million tourists a year, with nearly 90million visiting France – making it the world’s most visited tourist destination. 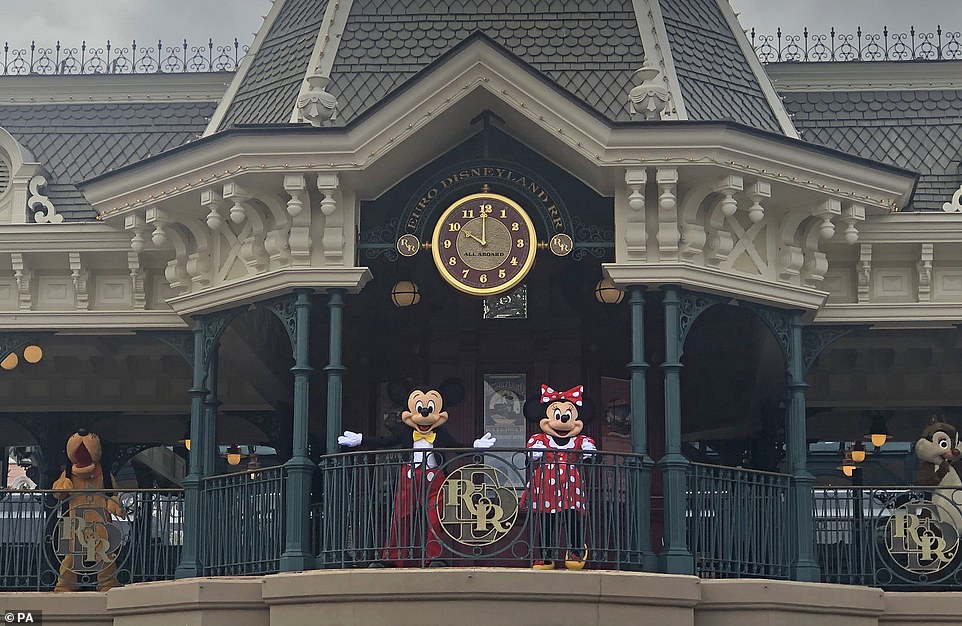 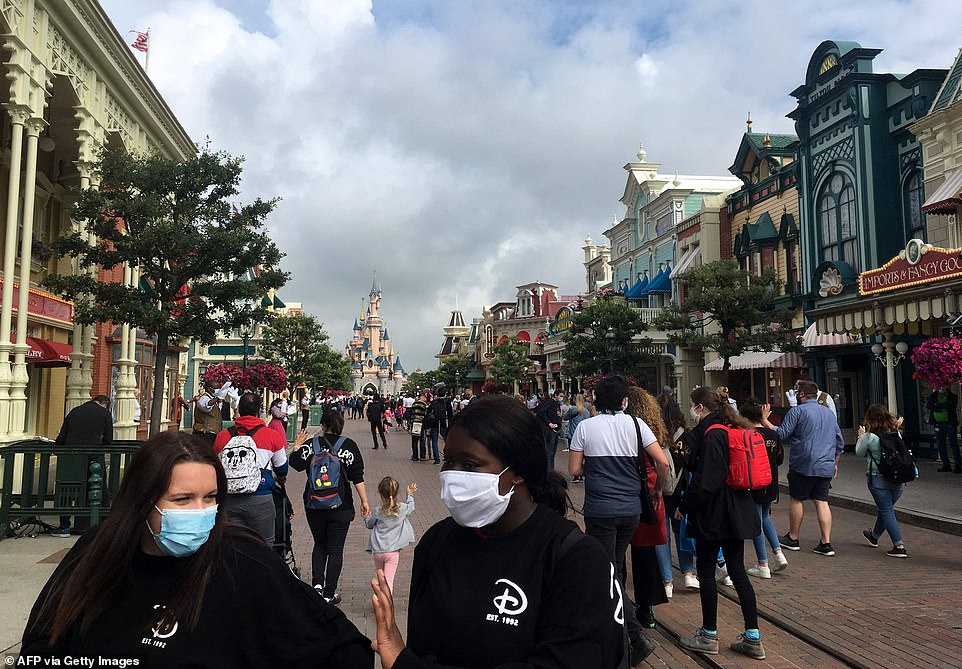 Guests wearing masks walk down the Main Street of Disneyland Paris today, where some rides and shows remain out of bounds because of coronavirus restrictions

The industry normally accounts for nearly eight per cent of GDP, more than £50billion in tourism receipts and two million jobs in the country, the French government says.

French authorities had previously set the goal of 100million international tourists by 2020, but the industry has been ravaged by the global economic standstill in recent months.

Britain last week relaxed its travel restrictions, meaning that a trip to France will no longer lead to a 14-day quarantine when the traveller returns to England.

The UK Foreign Office has also exempted France from its warning against non-essential international travel, a decision which affects travel insurance policies.

France had imposed a 14-day quarantine in retaliation for Britain’s decision, but UK ambassador Ed Llewellyn announced on Monday that Paris was dropping the measure.