Mass brawl erupts at a lawn bowls match as teens armed with chairs invade the green, hurl stones at terrified pensioners and punch an elderly man in the face

A mass brawl erupted at an lawn bowls match after a group of teens launched an attack on terrified pensioners.

The youths invaded the bowling green in Teignmouth, Devon armed with stones and chairs before singling out one of the elderly players who was reportedly then punched in the face.

A 69-year-old man needed hospital treatment for cuts to his face and is now recovering at home.

Shocked witnesses said they had never seen anything like it as the elderly bowls players were left cowering for cover from the vicious and sustained attacks.

Witnesses say the teenagers, who attacked an elderly man on the bowls lawn, were pinned down after the brawl as dozens of people looked on in shock

The 30 minute ordeal only ended after an off-duty police officer that was jogging past intervened.

The injured pensioner said he was too upset to comment but cops have confirmed they are continuing to investigate the the fight which broke out at The Den, Teignmouth, Devon, last Saturday.

It happened during a match between Teignmouth Bowling Club and Lyme Regis.

Police arrested two 14-year-olds on suspicion of assault and affray before releasing them on bail. 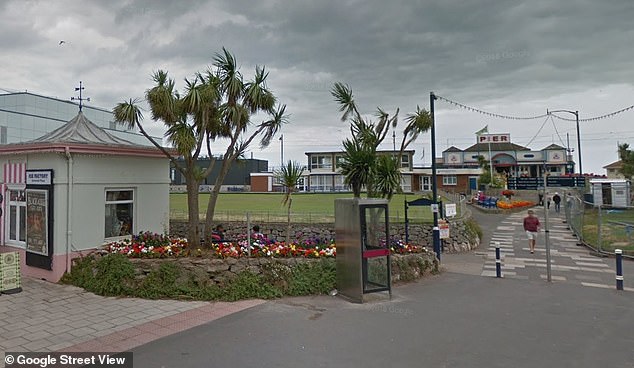 The Den playing club is next to the Pavilion on the sea front of Teignmouth in Devon. The local bowls club were playing against Lyme Regis at the time of the incident

Eyewitness and fellow bowler Eric Tose said: ‘These kids have been intimidating people in the resort for years.

‘This was the worst of it. Some people said they had not seen anything like it in their lives. It was dreadful.

‘She took one of the lads down – and he wasn’t going anywhere after that. Another off-duty policeman went to fetch some cuffs.’

Another eyewitness said: ‘There was a group of them lingering by the grounds.

‘After the game one of the players went over to them asking them to leave before they all pounced on him. 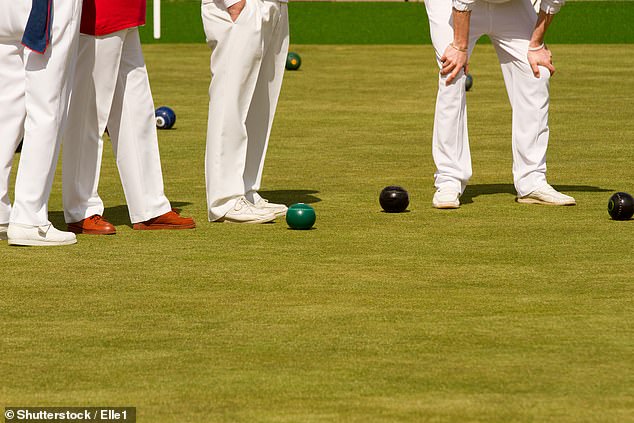 Devon and Cornwall Police said: ‘We were called at around 5:15pm following reports of a disturbance at the Teignmouth Bowling Club, The Den’ (stock photo)

‘They came at him with stones and one of them even picked up a metal chair as they raced towards him.

‘He was hit in the face just because we wanted to enjoy our game.

‘Bowls is an old person’s game and we’re all over a certain age.

‘I don’t see why they would do it in the first place.’

Devon and Cornwall Police said: ‘We were called at around 5:15pm following reports of a disturbance at the Teignmouth Bowling Club, The Den.

‘Two 14-year-old boys were arrested on suspicion of affray and assault, both have since been released on police bail until 5th July.

‘One person sustained a minor facial injury and was taken to Torbay District Hospital as a precaution.’