This is the shocking moment two groups of men including British tourists square up to each other in Wild West scenes on a Barcelona beach.

Other sunbathers were filmed picking up their belongings and running for safety as the men traded punches before an overweight member of the rival group began to batter the Brits with a metal pole.

One of the tourists caught up in the melee – a man with a Cockney accent wearing red shorts – took a punch to the face from another in blue swimming trunks as he protested: ‘They’re mine, they’re mine, these are mine.’

The violent scenes are understood to have unfolded at lunchtime on Saturday. 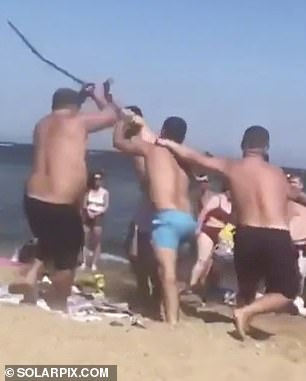 Other sunbathers were forced to flee the beach when two groups of men, including British tourists, broke into a violent fight. One man used a metal bar to smack people on the head during the fight on La Barceloneta beach 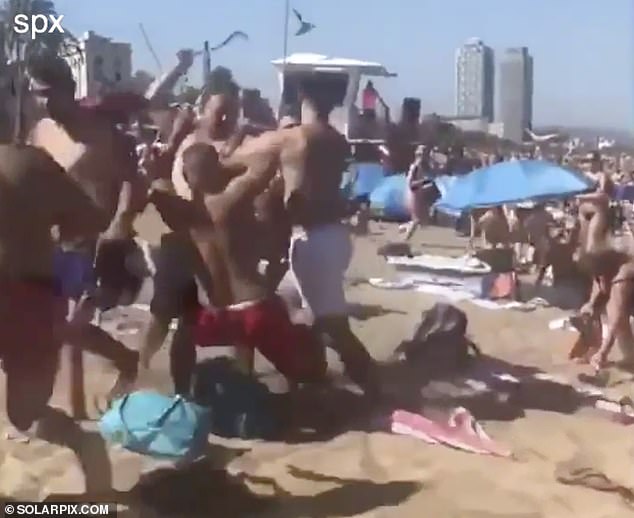 A pal tried to reach the overweight sunbather with the metal pole in his hand, moaning: ‘You hit me in the head’

A man in white shorts reacted to the attack on his friend by running over and punching the aggressor in the face as someone else shouted out in English: ‘You’d better f*** off.’

Frightened families had to distance themselves from the violent altercation as the man in black shorts picked up a metal pole and began to batter the British group. 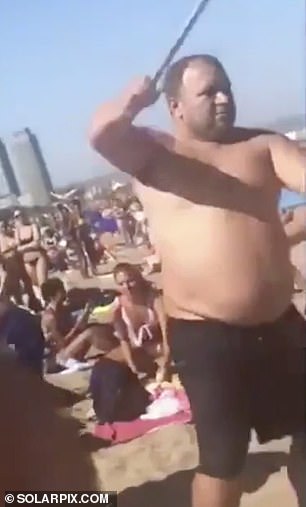 While it is unclear what caused the fight, a British tourist was heard shouting: ‘Give me my f****** money back’

The Brit in the red shorts continued to protest an unidentified valuable had been taken, before shouting out: ‘You give me my money back.’

He then points his finger and repeats his demand: ‘You give me my f****** money back.’

A pal tried to reach the overweight sunbather with the metal pole in his hand, moaning: ‘You hit me in the head like that’ in a momentary truce before the punching and kicking started again.

Street vendors stepped in to try and break the men apart until police were called.

Sirens could be heard in the distance as the two groups of fighters were overpowered by officials on the sand.

The shocking incident happened on La Barceloneta beach, which for years has been at the centre of tension between holidaymakers and locals who say their working class area has been destroyed by mass Magaluf-style tourism.

A spokesman for the regional Mossos d’Esquadra police force, which sent officers to the scene, confirmed the incident had been dealt with by local police employed by Barcelona town hall.

No-one was immediately available for comment this morning from the town hall – to explain why the violence had flared and whether the Brits had caught a member of the rival group trying to steal their belongings.

Two summers ago a couple were filmed having al fresco sex by the same beach. 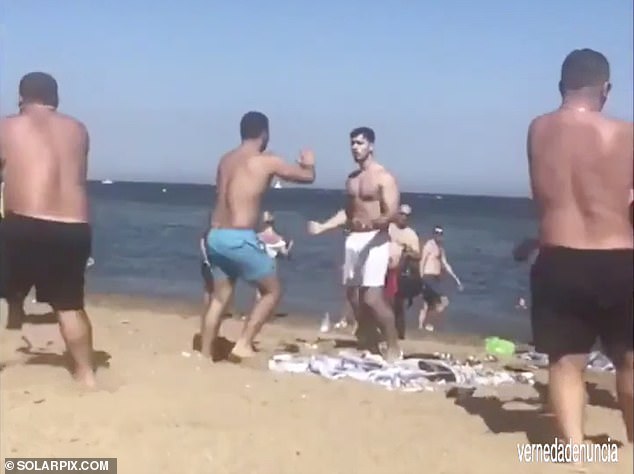 The pair were identified as holidaymakers by enraged locals who used the footage to complain about the drunken tourists they claimed were ruining their former fishing village.

The working-class neighbourhood near the Catalan capital’s coastline has been the scene of long-running protests against drunken Magaluf-style holidaymakers and illegal tourist flats.

The protests started in La Barceloneta but spread to other areas of the city including Poblenou.

Months of discontent erupted in 2014 with noisy street protests after a group of tourists were filmed coming out of a supermarket in La Barceloneta naked in broad daylight.

A neighbourhood association which published footage of the beach fight involving the Brit tourists said: ‘A normal day on La Barceloneta beach in Barcelona.’