Mass shootings trigger unnecessary blood donations: More than 15% of it is thrown away, study finds

Mass shootings may trigger an increase in blood donations that are discarded, a new study suggests.

Researchers from Northwestern Memorial Healthcare in Chicago found that more than 15 percent of the blood used to save lives is wasted.

That is five times more than the usual disposal rate at blood banks during a regular month.

Blood donations take around two days to process, but the transfusions for most shooting victims occur in the first 24 hours after the event.

The team says its findings show blanket calls for donations are often unnecessary and that more systematic methods could lead to less wasted product, such asking for asking people to donate by ZIP code.

The deadliest mass shooting in modern US history occurred in Las Vegas on October 1, 2017 – killing 58 people and injuring 869.

The researchers say that 220 people were admitted to the hospital, with 68 of those being in critical care.

The American Red Cross reported that in the first three days following the press conference, it saw a 53 percent increase in blood donations across the US.

A press release issued on October 2 by the AABB (formerly known as the American Association of Blood Banks) stated there was enough of a blood supply to meet the needs of the Las Vegas victims.

United Blood Services, which collects blood and distributes it to hospitals in 22 states, says it received 791 donations immediately after the Las Vegas shooting.

However, it reported that 137 of these donations – around 17 percent – went unused and had to be discarded.

On average, 26 donations are discarded per month at the blood bank, according to the organization – a five-fold increase in the amount of donations thrown away.

The study authors said their findings show it was clear, in hindsight, that the mass call for blood donation was unnecessary.

‘From our data, it is likely that the total one-day blood component transfusions needed in Las Vegas were more than in any mass shooting on record,’ said first author Dr James Lozada, an assistant professor of anesthesiology at Vanderbilt University Medical Center in Nashville, Tennessee.

Dr Lozada added that while there is an ’emotional desire’ to donate blood after a mass casualty event.

After the shooting at Pulse, a gay nightclub in Orlando, in June 2016, there were 53 people left wounded – many of them in need of blood transfusions.

Local blood banks in Florida issued calls asking for donations. But gay men who wanted to donate were not allowed to due to a ban by the US Food and Drug Administration.

Men who have had sex with men in the previous 12 months are not allowed to donate, despite medical professionals saying there is no evidence to support the ban. 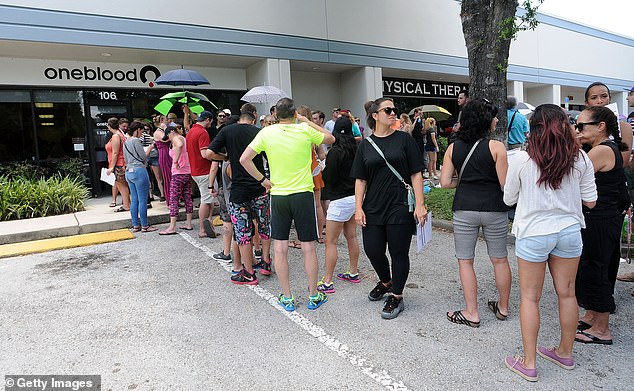 After the shooting at Pulse, a gay nightclub in Orlando, in June 2016, many victims were in need of blood transfusions, but gay men were not allowed to due to an FDA ban. Pictured: A long line of people wait at the OneBlood Donation Center to donate after the Pulse nightclub shooting

But Dr Lozada says there are more effective measures than widespread calls for affected communities.

‘One of the things that we propose in the paper is for cities to develop some protocols for these scenarios, where instead of issuing a blanket call for blood donation you would do it in a systematic way,’ he said.

‘As one suggestion, you might do it by ZIP code.’

This system could be employed for victims of the shooting at the Tree of Life synagogue in Pittsburgh, Pennsylvania, that killed 11 people and wounded seven others including the suspected perpetrator.

In August, the Federal Emergency Management Agency released its after-action report for the Las Vegas massacre.

The report recommended that future first-responders be equipped with more plentiful medical kits, including bandages and tourniquets.

‘We’re just now getting into an era of really recognizing the benefits of tourniquets and pre-hospital care in civilian mass casualty events,’ Dr Lozada said.

‘In [the November 2015 Paris attacks] they had much more ability to respond immediately with tourniquets, bandages and medications.

‘That could account for the comparatively reduced need for blood products seen in that attack.’