Mass strikes have hit Belarus on the sixth day of protests against the ‘rigged’ re-election of dictator Alexander Lukashenko as hundreds of ‘tortured’ protesters are released from prison.

Belarusian authorities released hundreds of people who were detained amid demonstrations contesting the results of the presidential election, in an attempt to assuage public anger over a brutal crackdown on peaceful protests.

Scores of detainees were seen walking out of a jail in the capital, Minsk, at around midnight on Thursday.

Early on Friday morning, volunteers also saw at least 119 detainees being released in the nearby city of Zhodino.

Workers including employees of the Minsk Automobile Plant (MAZ) today took part in a mass strike in Minsk protest against presidential election results and demand re-election. 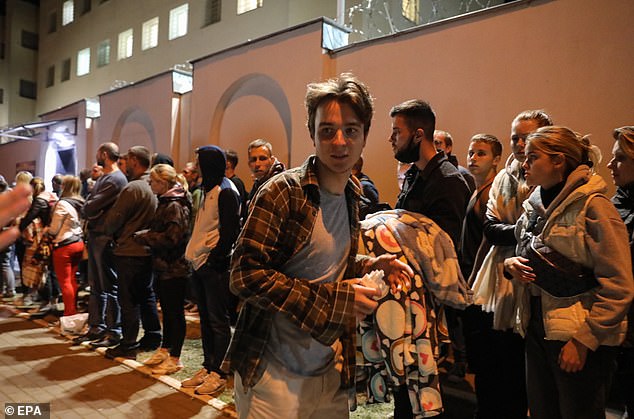 Belarusians leave a detention center in Minsk on Friday, where protesters were kept following recent protests against the presidential election results

People are on strike all over the country. Major strategic enterprises protest today. BelAZ, Hrodna-Azot, MTZ. Authorities are trying to appease protesters, officials go to enterprises to talk to employees. The regime is collapsing. Even faster than anyone could think pic.twitter.com/EP0Ubsu0zV

Ambulances arrived to carry those who were apparently unable to walk on their own.

Video footage taken on Friday morning shows workers from all over the country striking in protest of the presidential election result.

The releases came hours after Belarus’s top law enforcement official apologised on state television for the indiscriminate use of force by police.

‘I take responsibility for what they say was violence against those people, who happened to be nearby and failed to back off quickly enough,’ Interior Minister Yuri Karayev said late on Thursday.

The apologies and the release of detainees followed five days of massive protests, in which crowds of demonstrators swarmed the streets to contest the poll results and demand an end to the 26-year rule of authoritarian President Alexander Lukashenko.

On Thursday, thousands of workers rallied outside industrial plants to denounce the police actions and push for a recount of Sunday’s vote.

Nearly 7,000 people have been detained and hundreds injured in the crackdown on demonstrators protesting over official results which said Mr Lukashenko won 80% of the vote and his top opposition challenger only 10%. 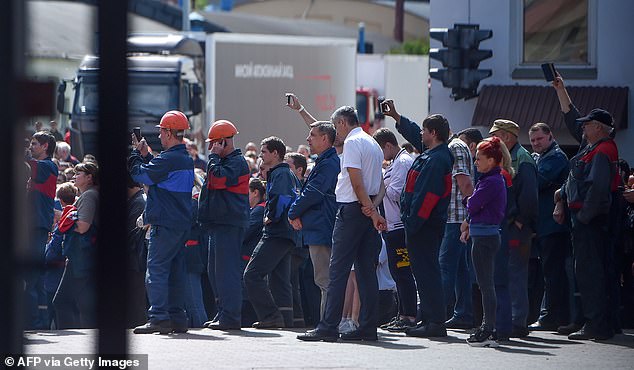 Employees of Minsk automobile plant take pictures as they attend a rally to express their solidarity with recent rallies of opposition supporters, who accuse strongman Alexander Lukashenko of falsifying the polls in the presidential election in Minsk, on August 1

On Thursday, hundreds of women formed long ‘lines of solidarity’ in several areas of Minsk. Many were dressed in white and carried flowers and portraits of detained loved ones.

The human chains grew throughout the day, filling the capital’s main central squares and avenues and spreading to numerous other cities as motorists honked in support.

In Minsk and several other cities, thousands of factory workers also rallied against the police violence, raising the prospect of strikes in a new challenge to the government. 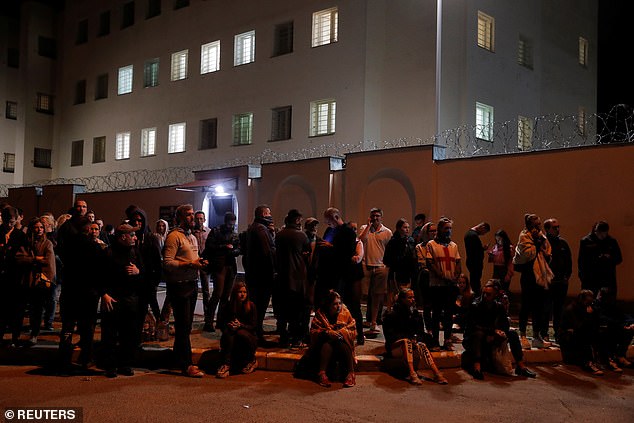 People wait for relatives and friends to be released from a detention centre, following recent protests against the presidential election results in Minsk, Belarus, on August 14

Amid growing public dismay, dozens of military and police veterans posted videos in which they threw away their uniforms and insignia. Several popular anchors at Belarus’s state TV stations have quit.

The demonstrations have spread even though the protest lacks leaders.

The top opposition challenger in the vote, Sviatlana Tsikhanouskaya, suddenly emerged in neighbouring Lithuania on Tuesday and called on her supporters to stop protests in a video that her associates said was recorded under pressure from law enforcement officials before she left.

The 37-year-old former teacher had joined the race to replace her husband, an opposition blogger, who has been in prison since May.

The massive protests against the election results and police brutality have been an unprecedented challenge to Mr Lukashenko, who has been in power since 1994 and earned the nickname of ‘Europe’s last dictator’ for his relentless crackdown on dissent.

The scope and ferocity of the police actions were remarkable even for Mr Lukashenko’s iron-fisted rule, triggering widespread anger.

After dismissing protesters as mostly ex-convicts and unemployed, the authoritarian leader kept silent on Thursday as the demonstrations spread quickly. Some reports said he was preparing an address to the nation.

Belarusian upper house speaker Natalya Kochanova said late on Thursday that more than 1,000 detainees had been released earlier in the day following Mr Lukashenko’s order to law enforcement agencies to look more closely into the detentions.

A protester died in Minsk on Monday when, according to the Interior Ministry, an explosive device he tried to throw at police blew up in his hand. 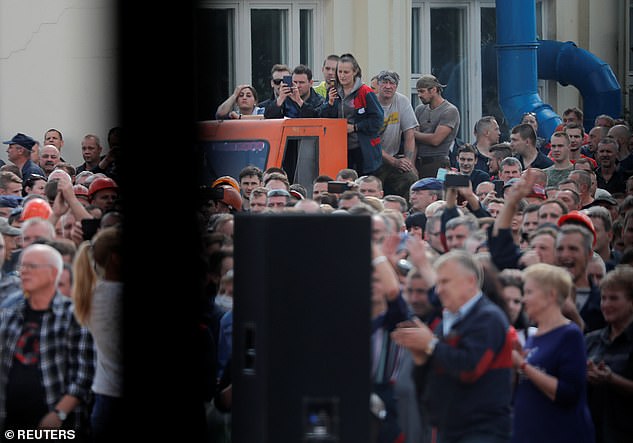 Media reports challenged the ministry’s claim, alleging that he was killed by police.

The place where he died quickly turned into a pilgrimage site, with hundreds of people, including European ambassadors, laying flowers there.

The authorities said a detainee died in the south-eastern city of Gomel, but the circumstances of his death were not immediately clear.

The brutal suppression of protests drew harsh criticism in the West.

European Union foreign ministers were set to meet on Friday to discuss a response, and German Foreign Minister Heiko Maas said the 27-nation bloc would ‘increase the pressure’ on Belarus.