The biggest Chick-fil-A location in the world is now open in New York City.

The new 12,000-square-foot franchise location had its grand opening on Thursday, drawing massive lines of people eager to satisfy their fast food craving and check out the behemoth, five-story restaurant.

The new Chick-fil-A, located at One World Trade Center in the Financial District, features what the Georgia-based company called ‘one of a kind design elements,’ including seating for 140 people, an open-air rooftop dining area, floor-to-ceiling windows, two kitchens and a semi-private group meeting and dining space. 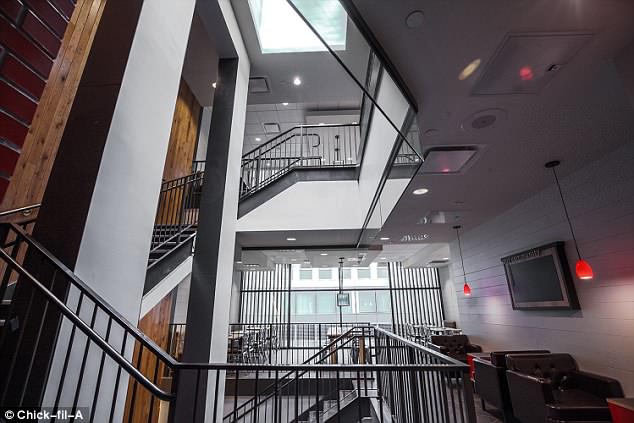 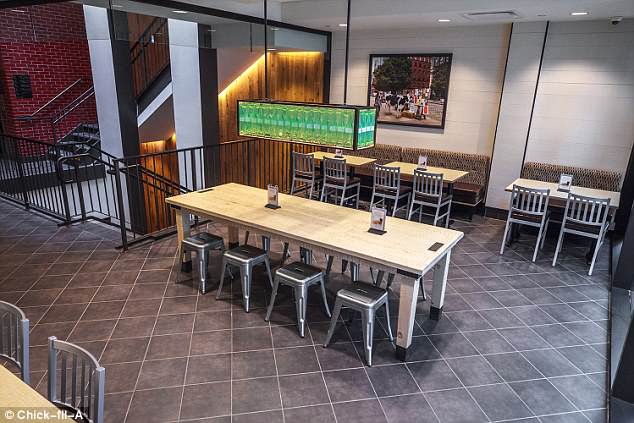 People walking by the restaurant marveled at the length of the lines and expressed their joy at having a Chick-fil-A nearby.

‘I think every pace student is excited that Chick-Fil-A opened on Fulton today,’ a Twitter user wrote, referring to a university with a campus within walking distance.

‘They done put a Chick-fil-A on Fulton St I’m blown away,’ another tweeter wrote.

One Twitter user posted a snapshot of the crowd waiting to get inside the restaurant, snarking, ‘Seriously? This mob scene for chick filet [sic]? It’s fast food. It’s not sneakers.’ 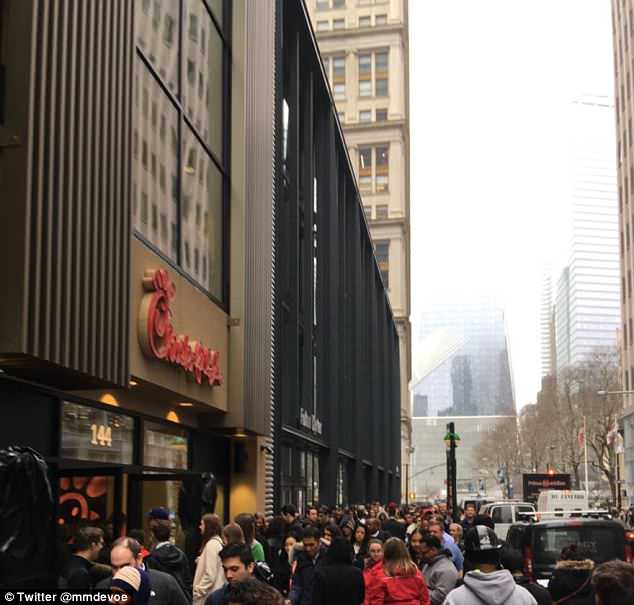 The Chick-fil-A was mobbed on opening day Thursday, with lines going down the street

The new outpost will be open Mondays through Saturdays. Like all the other Chick-fil-A locations across the US — including the four other locations in New York City — the restaurant will be closed on Sundays.

Since being founded in 1946, Chick-fil-A has closed on Sundays so that ’employees could set aside one day to rest and worship if they choose,’ according to the company website.

The new Chick-fil-A will employ 150 local residents and partner with New York Common Pantry to donate food to the homeless. To date, the company said, it has provided more than 17,000 pounds of food to the charity organization.

It will also partner with Feeding Children Everywhere, a social charity that helps groups put together healthy meals for children in need.

While many exalt Chick-fil-A’s menu, the company itself has been criticized — and boycotted — for having donated millions to organizations that support conversion therapy and oppose same-sex marriage.

In 2012, the company announced that it would ‘leave the policy debate over same-sex marriage to the government and political arena,’ and ceased donating to the controversial groups. Company officials have since said that it now focuses its charitable efforts on youth and educational causes.