A massive blaze has broken out at an Ibiza tourist hotspot, sparking fears that a hotel is on fire as planes attempt to tackle the fire.

Eyewitnesses shared video of the massive blaze at San Antonia harbour as police and helicopters try to get it under control.

Huge plumes of smoke are billowing into the air in San Antonia harbour, Ibiza, amid fears that a hotel is on fire at the resort 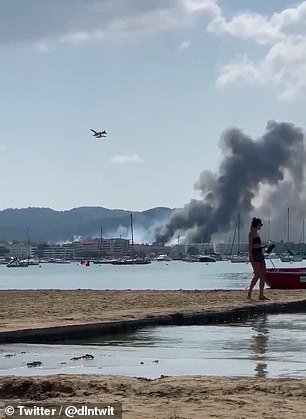 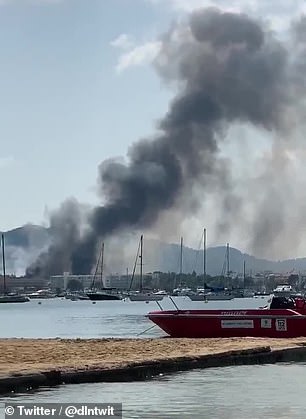 Pictured: The huge blaze in San Antonia harbour in Ibiza this afternoon amid fears that the property on fire is a hotel in the resort

Melanie Baldwin posted a clip of the chaos on Twitter, writing that there was a ‘large fire’ in the bay.

‘Planes and helicopters are using water to try and [get it under] control,’ she added. ‘Hope everyone staying closer than us [to the blaze] are safe.’ 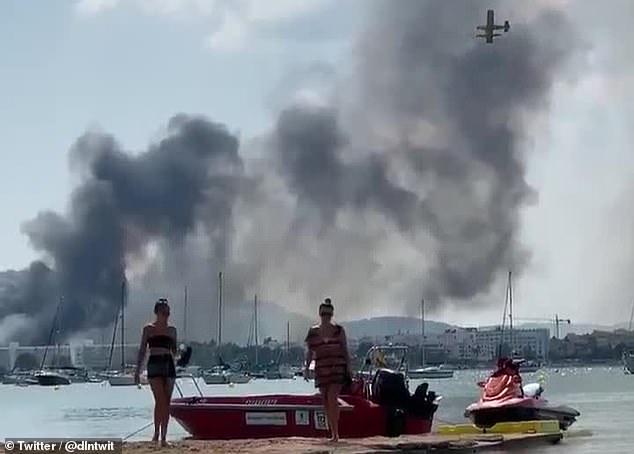 Pictured: A plane circles overhead as emergency services pour water on the huge fire in Ibiza

Firefighters were filmed throwing water on the flames in a clip shared by another eyewitness.

Their post suggested that the blaze started around 3.45pm and claimed planes were attempted to extinguish the flames.