‘Iconic’ 3.5-metre crocodile shot DEAD after it chased children up a tree in a remote township divides opinion – but Bob Katter praises the act as a victory against ‘city imbeciles’

A huge ‘iconic’ crocodile that chased terrified children up a tree at a remote Queensland community swimming area has been shot dead.

The February incident, which generated international headlines for locals living at Cape York in far North Queensland, saw calls for the feared reptile to be removed permanently.

They got their wish this week, with Queensland Parks and Wildlife rangers killing the saltwater crocodile following a call from Robbie Sands, the mayor of Kowanyama Aboriginal Shire.

Some locals were unimpressed at the development, but Australian politician Bob Katter, the Federal Member for Kennedy, felt it was a win for common sense.

‘When a crocodile kills you it’s one of the most cruel deaths you could ever have — there’s terror and there’s pain,’ he said. 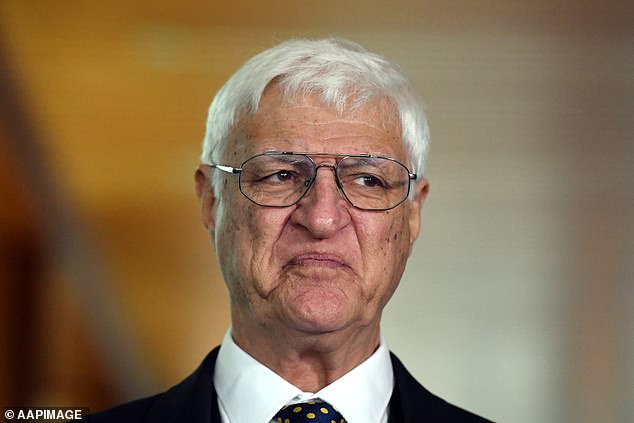 The move angered some locals, but Australian politician Bob Katter, the MP for Kennedy, felt it was a win for common sense with large numbers of crocodiles in the area for many years

‘How can you not get upset when a little child is torn to pieces, in the most cruel manner humanly possible.’

Mr Katter also called out protection legislation of the reptiles, which has seen crocodiles explode in terms of increased numbers across the region.

In his eyes, the flow on effect has seen parks and playgrounds in far North Queensland ‘taken away’ due to the actions of ‘city imbeciles’, Yahoo reported.

Katter also believes far more people have been taken by crocs than the reported figures.

The children cheated death last month after the croc chased them out of the water from popular community swimming spot Magnificent Creek near Kowanyama.

Aged between 11 and 14, the youngsters were eventually rescued by local police.

Locals who opposed the shooting of the crocodile pointed to the fact the animal was ‘only’ 3.5 metres in length.

The Department of Environment and Science confirmed the crocodile located by rangers was a ‘good size’ at 3.5 metres long.

‘Due to the crocodile’s size and its immediate proximity within the town, adjacent to recreational areas, it presented a high risk to community safety,’ the statement read, according to the ABC.

‘The animal was declared a problem crocodile and, as there was no other option to remove the animal safely, it was humanely euthanised.’