Heavily armed police have stormed a home in south-west Sydney, dragging a man from the dwelling and arresting a woman in dramatic scenes that brought nearby streets to a standstill.

Shortly after 11am on Thursday, officers from Bankstown Police Area Command turned up at a home on Yanderra Street, Condell Park to speak to a man wanted on an outstanding warrant.

While at the property one man and two women – who recently arrived at the home – were arrested, with a 28-year-old woman injured and treated paramedics.

Shortly after 11am on Thursday, officers from Bankstown Police Area Command turned up at a home on Yanderra Street, Condell Park (pictured) to speak to a man wanted on an outstanding warrant 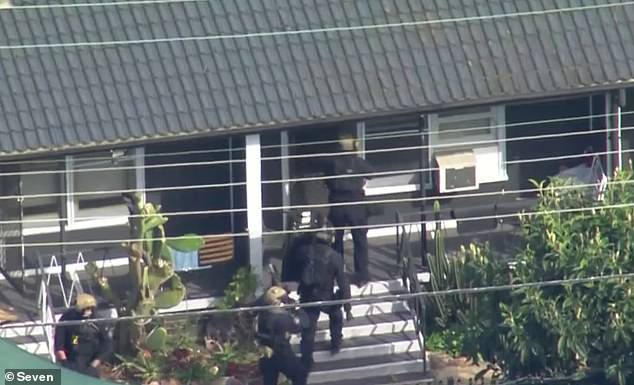 Heavily armed police have stormed a home in Condell Park in south-west Sydney, dragging a man from the dwelling and arresting a woman in dramatic scenes that brought nearby streets to a standstill

The other woman and man were released a short time later.

Another man – who was inside the home at the time – refused to exit.

Police established a border around the home calling in resources from the Tactical Operations Unit, Police Negotiators, and Public Order and Riot Squad to assist with negotiations.

Around 2pm, a handler and dog from the Dog Unit entered the dwelling where a 26-year-old man was arrested and bitten by a dog in the process.

He was taken to Bankstown Hospital in a stable condition for treatment.

Neighbours returning home from work were left stunned, only learning of the stand off only as they got caught up in traffic approaching their street.

Yanderra St resident Michael told Daily Mail Australia he watched as people were escorted from the home and the magnitude of the police presence made him fear for the worst.

‘There were so many police, they were everywhere blocking our road and at the gates,’ Michael said.

‘It’s weird, we don’t know what has happened so we see that many police and think the worst. I’m still thinking the worst.’

Another neighbour described the scenes on Thursday as ‘chaos’, adding he watched it all unfold from about 11am through his front window.

While at the property a 28-year-old woman was injured and treated paramedics, with another man inside the home refusing to exit and had to be forcibly removed by a dog. Both have been arrested

The property at the centre of Thursday’s stand off is one of four semi detached units side by side.

Cans of energy drink were strewn across the lawn with a bike and broom also on the ground and out of place.

By 4pm just one officer remained stationed at the scene. Police said the incident is now under control but inquiries are ongoing.

Transport routes were diverted around the area while the operation was ongoing.

Transport for NSW bus services said route 925 buses are ‘diverting away from Edgar St at Eldridge Rd due to a police operation. Buses are using Chapel Rd and Milperra Rd instead and are not going to Condell Park. 20 stops being missed.’

Inquiries into the incident continue.