MasterChef Australia judge Jock Zonfrillo has spoken out about the challenges he faces with battling anxiety and stress behind closed doors.

The celebrity chef found himself at the centre of a major talking point last season after curious fans spotted him clutching a set of beads on the show.

After he was bombarded with a ‘billion’ questions from viewers, the restaurateur explained they were ‘worry beads’ to help ease his anxiety.

‘When I’m nervous or anxious, my brain would just start racing like I’m thinking irrationally so by using the worry beads, it calms that noise in my brain, which is my anxiety,’ Jock told Daily Mail Australia.

‘I’ve got a set of worry beads on me all the time so if they’re not in my hand, they’re in my pocket. I’ve made so many types, they’re kind of weirdly an accessory. On MasterChef, I’ve got different colours for different suits that I wear.

‘So it’s not a flashing beckon that says “I have a problem” or “I have anxiety”.’ 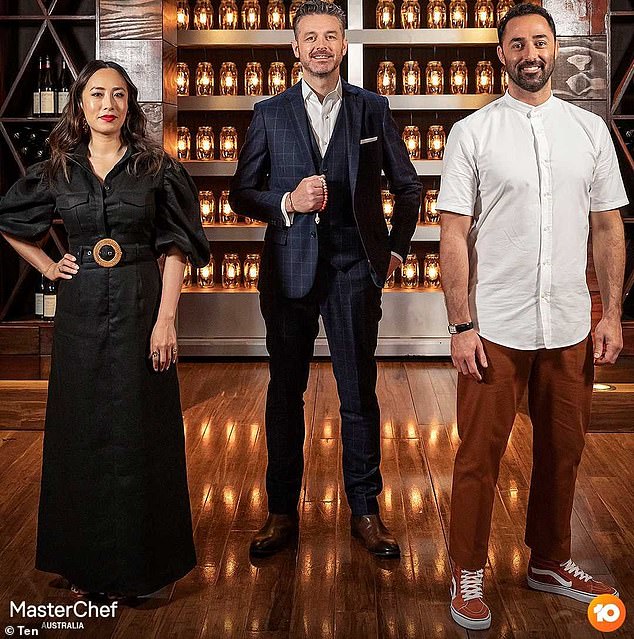 Jock has been using his worry beads in his daily life, including MasterChef filming, alongside his co-hosts Melissa Leong and Andy Allen

He revealed how the worry beads have become a coping mechanism in his daily life.

‘I don’t classify myself as having a super crippling anxiety but it’s certainly there. It’s challenging and it’s tough. I get really uptight if I’m late. For example, being late to a dinner reservation kills me,’ Jock explained.

‘It’s a battle for any parents with kids they try to get out the door. For me, it can cause tension in our household when we’re running late getting out the door because I’m just anxious about it.

‘That’s where the worry beads come into play. You can sit there and zone out, and kind of get back to what’s normal and what’s real. You’re about to go to dinner and have a good night and spend time with your loved ones.

‘It doesn’t matter if you’re 10 minutes late, just ring the restaurant and tell them you’re going to be late. The beads are my way of dealing with it – it helps you rationalise the anxiety.’ 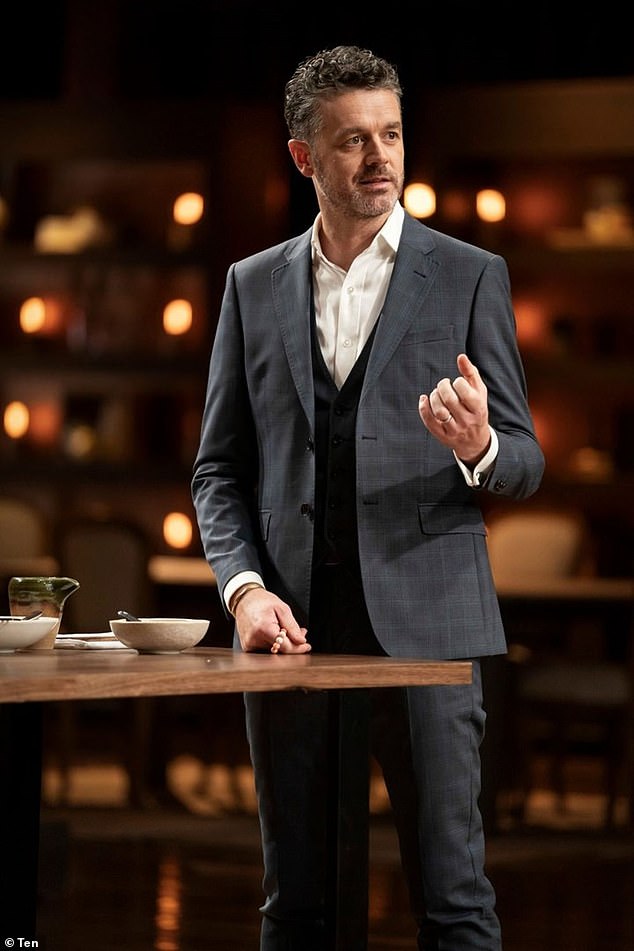 Jock was first introduced to worry beads after being given a set by the wife of late journalist A.A Gills following his tragic death.

‘They became an Achilles heel for me,’ he said.

‘The more I flicked the beads, the more I found myself comforted by the memory of Adrian, and the less focused I became on whatever was worrying me.

‘Flicking and counting my beads just calms that voice in the back of my head that tries to throw me off course.’

Jock said he has been carrying a set of worry beads since the first day he filmed MasterChef Australia: Back To Win 2020.

At the beginning of filming the season, the judge said the production team actually asked him ‘what’s going on with the bead things?’ in his pocket after it was causing audio problems.

‘One day though, I thought screw it, and I’m glad I took them out of my pocket. It was such a relief,’ he explained.

‘For me, if you have any kind of difficulty or mental health – you’re embarrassed or ashamed, it makes you feel vulnerable. But I think at the end of the day, for me the worry beads were calming. It eases my mind.

‘I questioned why it took me so long to use my worry beads openly on MasterChef, and I think it’s because I didn’t really want to announce that my anxiety was constantly bubbling away in the background.’ 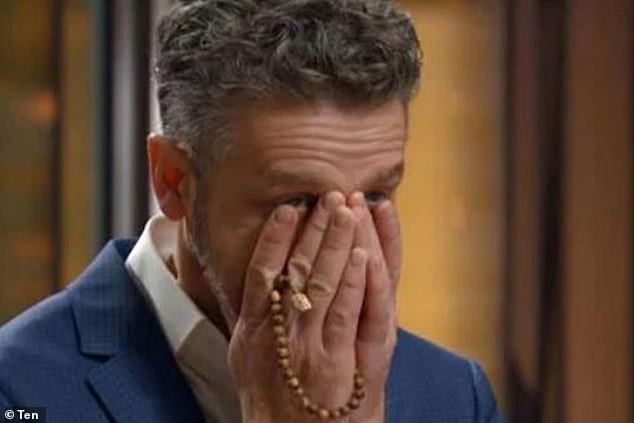 After he was bombarded with a ‘billion’ questions from viewers, the restaurateur explained they were ‘worry beads’ to help ease his anxiety

The worry beads helped him through the most stressful time of 2020 after his restaurant was forced to shut indefinitely due to the global Covid-19 pandemic.

‘When covid kicked in, we shut the restaurant and all of a sudden, you’ve got so much running through your mind,’ he said.

‘But at the same time, you still have to do filming [MasterChef]. The show goes on. You come into work every day and it’s go, go, go.’

In addition to his worry beads, Jock said he has regular visits to mental health clinics where he meets with psychologists and psychotherapists to talk about his anxiety.

‘I sit on a sofa, talk and understand the behaviour patterns I picked up that I’m not happy with or proud of and I work towards not putting myself in those situations that create those anxiety or how to deal with anxiety was it happens,’ he said.

Since going public about his worry beads, Jock said he receives ‘hundreds’ of messages of support every day from his fans, especially those dealing with anxiety.

‘People were quite surprised when they saw my worry beads. They were like “what’s with the beads? Is it religious?” and I said “no, they’re worry beads”,’ he said.

‘All of a sudden, people were asking me ‘hey can you make me a set of your worry beads? Because that’s something that could help me’. And so it became evident there were people in the same situation as me who struggle with anxiety.’

And it’s not just ordinary fans who are approaching him for help.

‘It’s people like CEOs of companies, executives, chefs… from all walks of life,’ he said. 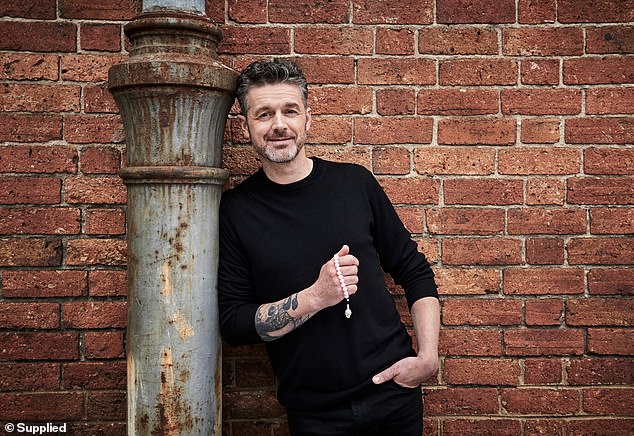 The celebrity chef has now launched his own label Caim, offering a range of his signature worry beads, all designed and handmade by Jock himself

The celebrity chef has now launched his own label Caim, offering a range of his  signature worry beads, all designed and handmade by Jock himself.

Available in three styles, each set of the limited edition worry beads are made from gemstones and semi-precious stones and are used by Zonfrillo as a tool that helps fast track his mind to calmness.

‘Caim is Scottish Gaelic, pronounced kyem. It’s not religious – it’s an invisible circle of protection that you draw around your body with your hand, to remind you of being safe and loved, even in the darkest times,’ he said.

While no two sets of beads will be the same, each style is finished with the final bead of a skull.

‘Skulls to me represent a sense of adventure without restraint. There was an old saying in Scotland; Why join the navy when you can be a pirate? And as someone who doesn’t do well with authority, I’ve always been able to relate to that. I guess it’s my subtle way of breaking the rules,’ Jock said.

In line with Jock’s transparency of his own mental health struggles, Caim is a proud supporter of Beyond Blue and will be donating $5 from every set of worry beads to their 24/7 Support Service.