The Matildas have thumped world no. 2 Sweden 4-0, with a stunning strike by Arsenal superstar Caitlin Foord sending the crowd of 22,065 at Melbourne’s AAMI Park into raptures.

The 28-year-old has earned over 100 caps for Australia since making her debut at 16, and admitted the toll of playing all year round had drained her, and many teammates.

A ‘refreshed’ Foord, whose long career has included stints in the USA’s National Soccer League, A-League Women’s and her current home in the Women’s Super League with Arsenal, as well as a distinguished International career, said she was enjoying football like never before. 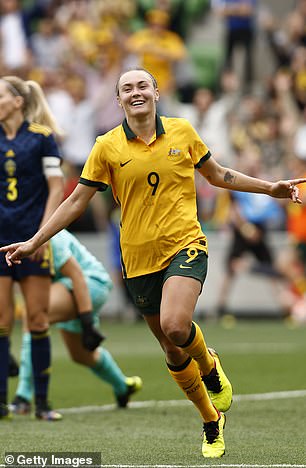 Foord scored two goals, and set up another, in the four-goal win, but it was her strike in the 51st minute that will please Aussie, and Arsenal, supporters the most.

After the ball came to the edge of the box during a corner for Sweden, a clever backheel by Hayley Raso found speedster Kyra Cooney-Cross, who dribbled up to the halfway line, beating three defenders, before putting through a brilliantly weighted ball for Foord.

Foord wrong-footed Elin Rubensson with the ball seemingly magnetised directly to her boot, before sending a curling ball from the edge of the box expertly into the top corner of the goals.

‘AAMI Park erupts!’ came the cry from the commentators as fans roared with delight.

It put the Matildas two goals up, with big wins over Sweden and Denmark over the last two months appearing to right the ship after the Tony Gustavsson-coached side had a disappointing couple of years. 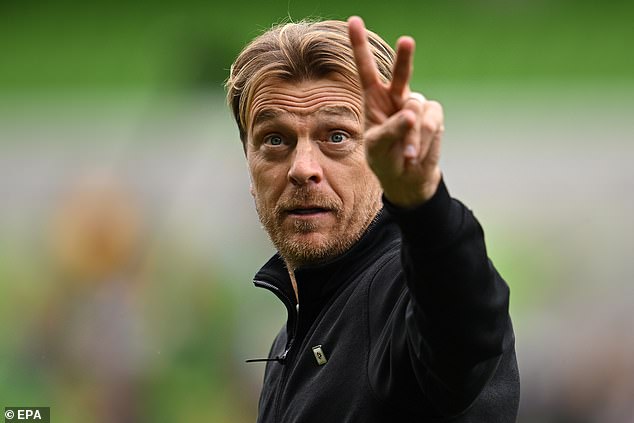 Matildas coach Tony Gustavsson has been under-fire for his selection and tactics over the past few years, but the playing group now feels rejuvenated, somewhat vindicating his approach

That decision came under fire after Australia copped a 7- 0 thrashing from Spain, but the Matildas coach felt vindicated by the newly recharged Foord.

‘A lot of them were very close to being fatigued and getting injured and burned out. They hadn’t had an off-season for years,’ he said.

‘We said, ‘We need to give them time off. It might cost us in the short run but in the long run it’s going to help us’.”

Foord explains that the joyous way the Matildas played football with on Saturday was as a result of simply being able to spend some time away from the game. 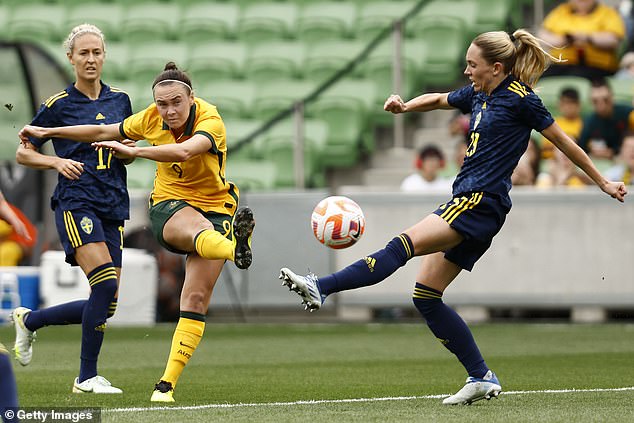 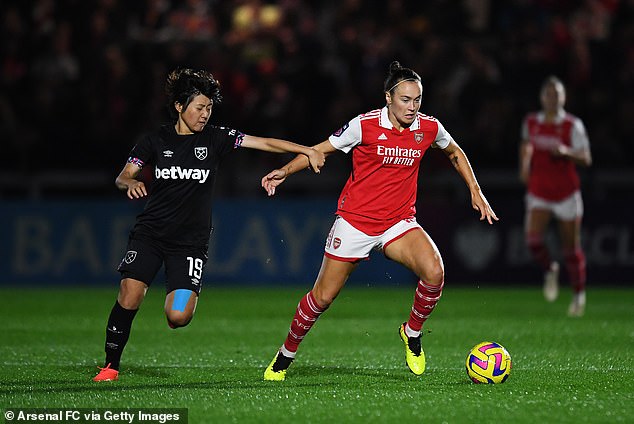 Foord (right) has been playing in England with Arsenal for the past two years, and has been in top form for the Super League powerhouse

‘We don’t get many opportunities to play on home soil so we want to enjoy every moment of that and make the most of every opportunity,’ she said after the match.

‘I just put it (being refreshed) down to having an off-season. Having time away from the game, having time to refresh and to miss the game a bit. That’s what I’ve needed.

‘That’s for a lot of us as well and making that move to England has given us the opportunity to do that.

‘But on top of that, being at a club like Arsenal – the level that I’m training in, day in, day out, and the demand to have to perform.

‘In a squad like that, surrounded by so many great players, if you’re not in form, you’ll be on the bench,’ said Foord. 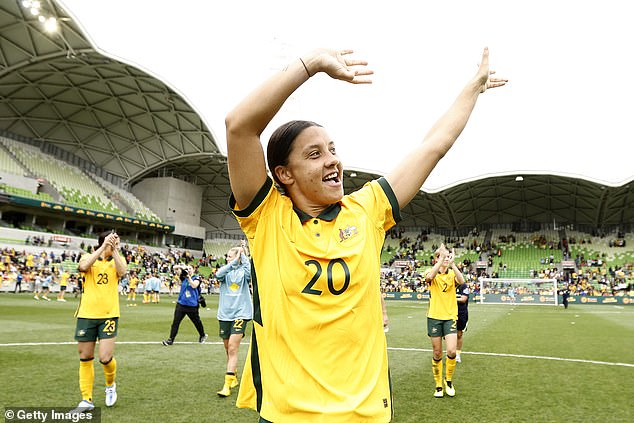 The utlity, who hails from Sydney, certainly hasn’t spent much time on the bench of late. Foord has five goals in her past three internationals, while she has scored four for Arsenal this season in the Women’s Super League and Champions League.

While usually seen streaking down a wing, Foord has also reaped the rewards of operating more centrally alongside skipper Kerr in a 4-4-2 formation with Australia.

‘Being central, I find the ball a bit more in front of goal, and more opportunities to shoot and to link up with Sam as well. I’m enjoying it,’ she said.

With a home World Cup on the horizon next year, the reversal in fortunes could not have come at a better time.

Kerr scored the opener and rising star Mary Fowler also netted in front of what was a very healthy and electric home crowd. 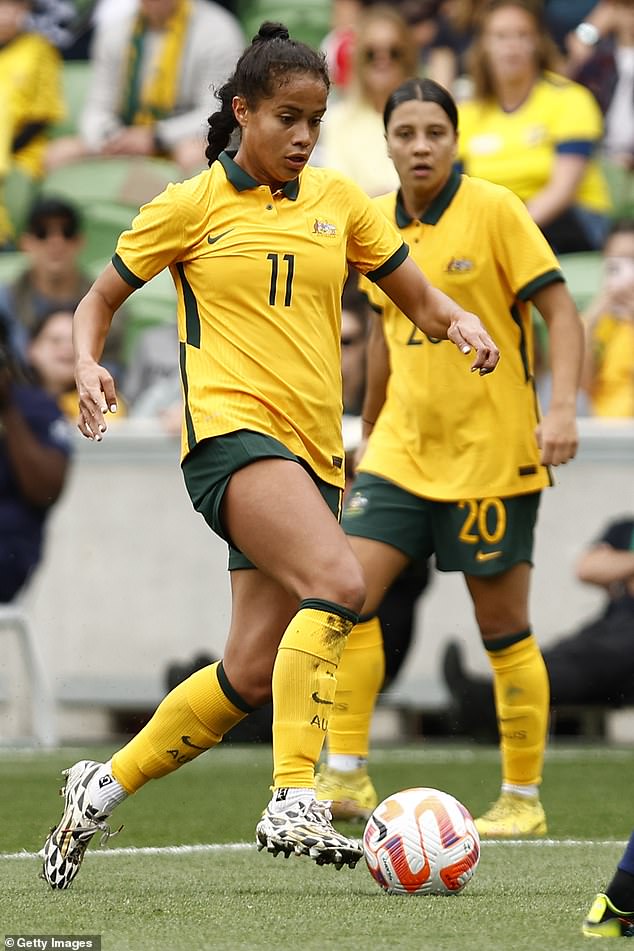 Australia’s third consecutive win is among the most impressive performances of what has been a rollercoaster ride under Gustavsson, alongside the dramatic Olympics quarter-final win over Great Britain.

The Matildas landed their first clean sheet against a top-10 nation since the 0-0 draw with the USA in the Olympics group stage, and Sweden are the highest-ranked team Australia have beaten since prevailing over world No.1 USA in 2017.

But the head coach refused to get overexcited despite the enormity of the result, albeit in a friendly, saying he was happy but not ‘over the moon’.

‘We struggled for 30 minutes in the first half and were lucky not to be down 1-0,’ Gustavsson said after the win.

‘We started off very good, the first five minutes, but after that, we got way too stretched and passive in our defending.

‘They played through us, they played around us, and we could have been 1-0 down. We did a tactical adjustment (at the 30-minute mark) that worked out well. So we finished off really well.

‘The second half was one of the better halves that we have played against top opposition,’ said Gustavsson.

Australia broke through in the 37th minute, when Foord shrugged off a defender outside the 18-yard box and found Hayley Raso on the left. 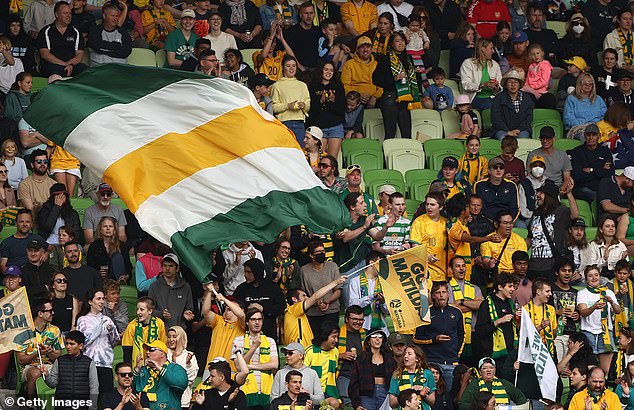 More than 22,000 packed into Melbourne’s AAMI Park for the match

Raso’s low, left-footed cross was met brilliantly by a sliding Kerr, for a goal Gustavsson said changed the game.

It was Kerr’s first international goal since playing New Zealand in April, and her first against a top-20 opponent since scoring against Brazil in October 2021.

Foord then finished off a lovely team move just five minutes later to complete the rout. 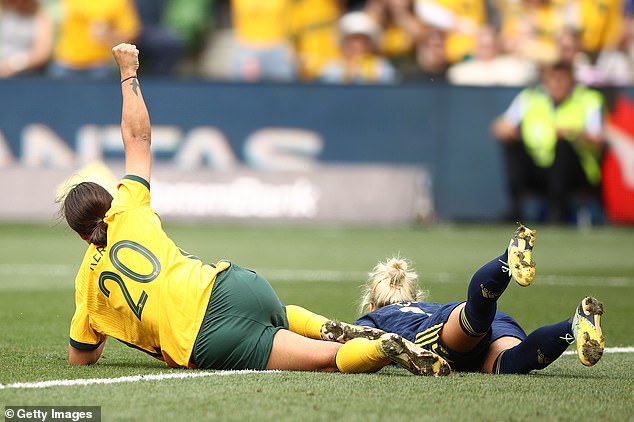 ‘We do feel good and we’re playing the style of play that we want to play,’ Foord told reporters after the match.

‘We want to be aggressive, and we want to take it to teams no matter who they are. That’s what we did today and the results showed.’

The side will now head to NSW’s Central Coast, where they will take on Thailand in another friendly at Gosford.