Matt Damon steps on a giant snake in Australia

Chris Hemsworth has joked that Matt Damon has been ‘kicked out’ of Australia.

The Avengers: Infinity War star has invited his friend to visit him a few times Down Under, but each time the 47-year-old actor and his family have had some unfortunate encounters with local wildlife.

This has prompted Chris to declare he shouldn’t make another trip in order to protect the reputation of the country. 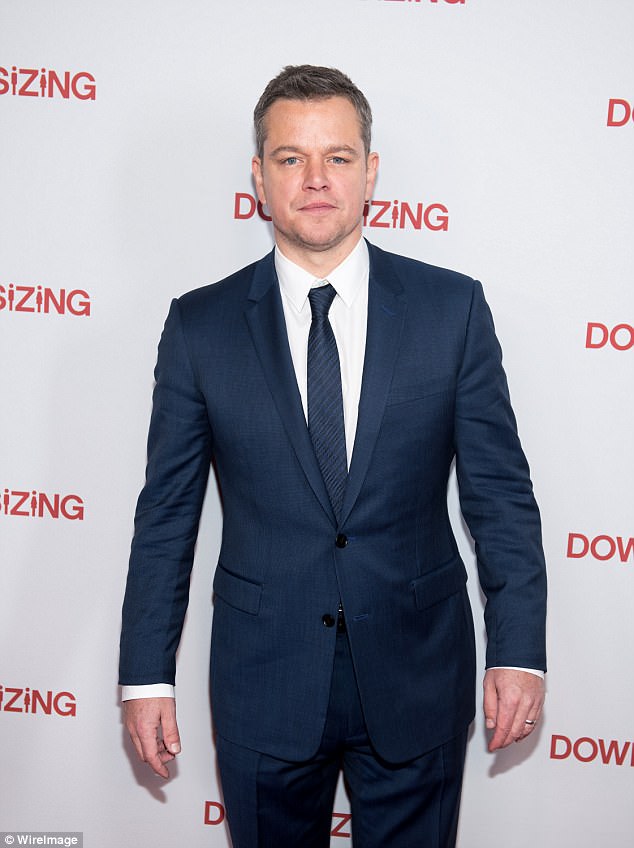 Is that why he left? Matt Damon stepped on a giant snake during his recent trip to Australia to visit Chris Hemsworth

Matt has previously spoken of how Stella was stung by a huge jellyfish, and Chris – who has daughter India, six, and twins Sasha and Tristan, four, with wife Elsa Pataky – has now revealed the Suburbicon star freaked out after a close encounter with a snake on his second visit.

The 34-year-old hunk – who is an ambassador for Australian tourism – told talk show host Ellen DeGeneres: ‘He came a while ago and was all, “What about the snakes and sharks and spiders?”, and I was like, “It’s fine, whatever”.’ 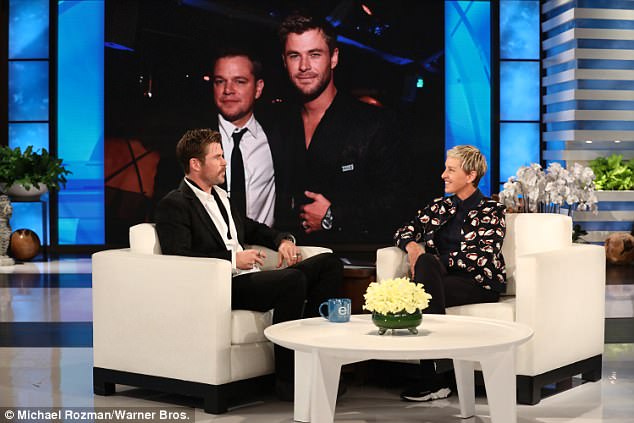 Telling the tale: Chris told the tale during an appearance on The Ellen DeGeneres Show 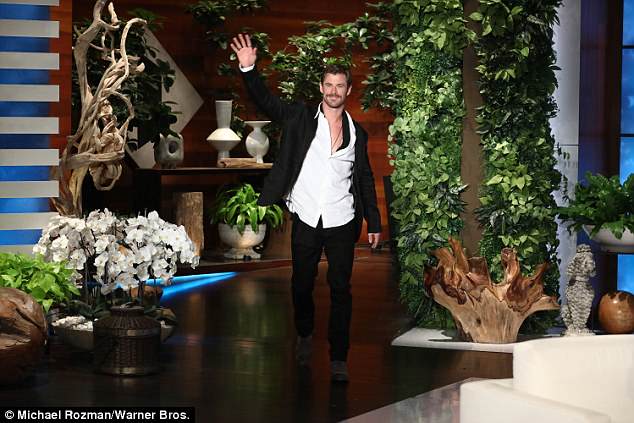 Hunky: The Thor star looked hunky in a white shirt and a black suit during his appearance on the talk show

‘He came (on your show) and told the story of how his daughter got a jellyfish sting, it was the worst I’ve ever seen, I was like, “That’s a one off, what a random thing”.’

‘So he comes back over again, gives Australia a second shot.

‘We pull up in the car at a cafe, he gets out, takes one step and then jumps back going “Oh my God, oh my God”. A huge big snake and he’d stood straight on it. 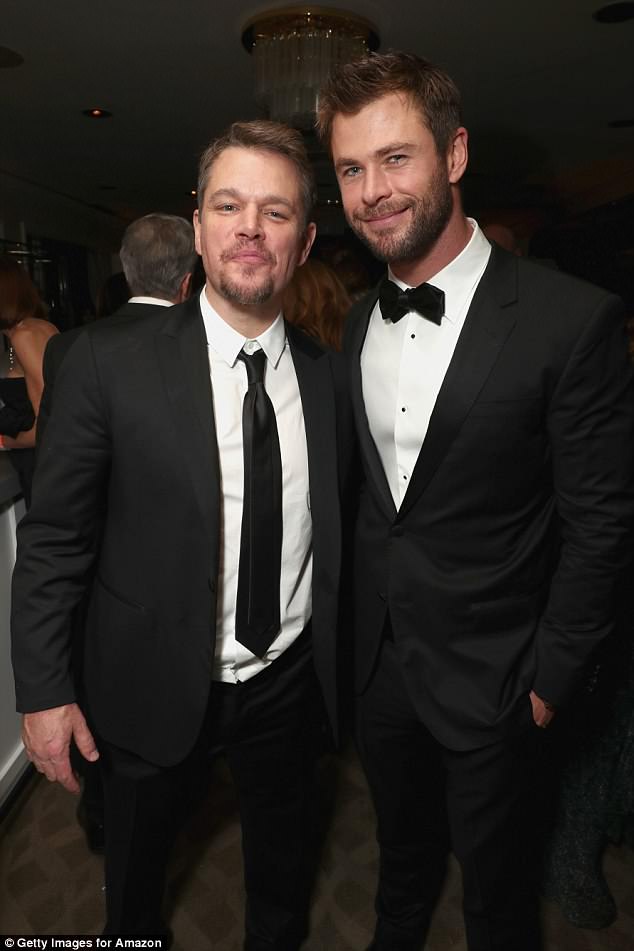 Best pals: Chris and Matt are best pals, and have been spending the last few weeks together in Byron Bay

‘He was like “You keep telling me they’re more scared of you” but I said, ‘You’re the problem. It’s not Australia.

‘We’ve had to kick him out of Australia for our sake.’

Matt previously spoke about Stella’s painful ordeal when they visited the beach at Byron Bay.

He recalled: ‘It was the worst thing. I mean, even Chris said: “Mate, that’s the worst thing I’ve ever seen in my life.” Like, it was really bad. She was in a little bit of surf, in about a foot or two of water… this thing literally wrapped around her. 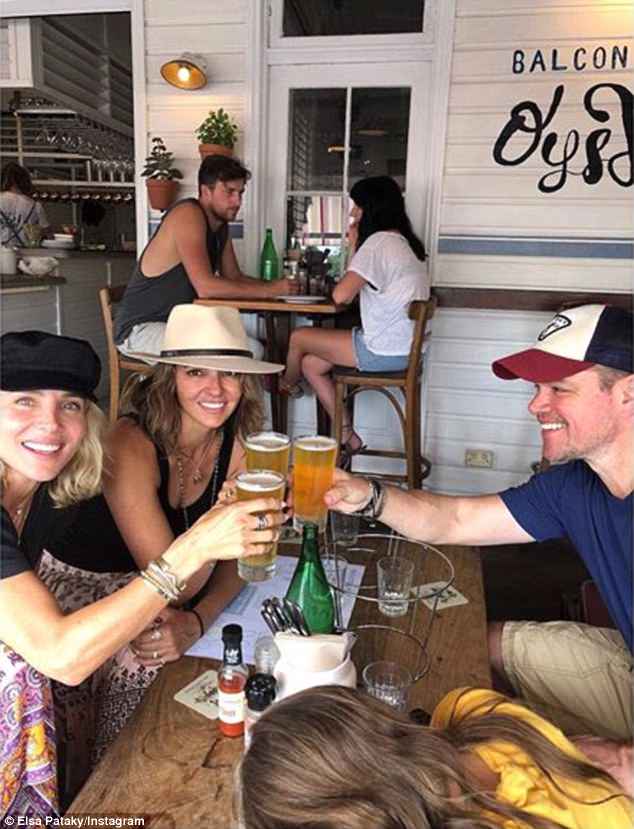 Good times: Matt and his wife Luciana are seen enjoying a beer with Chris’s wife Elsa Pataky during the recent trip

‘I could show you pictures that would turn your head. She had these, it looked like red shoelaces around her body.’

‘(I got stung) a little bit, but not like her. There was enough around her chest that a lot of locals said: “You should call the paramedics,” because you can go into shock.’

The paramedics recommended that Matt bathe Stella in hot water and gently sponge the affected area because the stings, which have enough venom in them to kill the weak, elderly and young, cling to the sponge.

He explained: ‘They showed up and said, “Actually, hot water [helps].” Like if you put her in a hot bath and just gently sponge away [the stings]. They stick to you with these little needles, basically. It’s really painful.’ 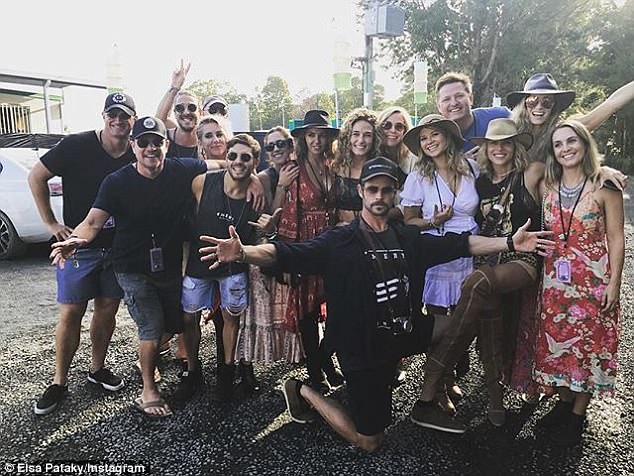 Embracing his free spirit: Matt and Elsa showed the couple a good time during their trip Down Under