Matt Dawson thought his wife Carolin was worrying too much when she urged him to go to the doctor about an insect bite.

‘I thought it was nothing to get concerned about,’ recalls the former rugby star, 44. After all, he reasoned, it was acquired while working out with a personal trainer at a park in Chiswick, West London, not on a tropical holiday.

Carolin, however, was concerned that he might have Lyme disease, a bacterial infection caught from ticks that travels round the body causing inflammation and flu-like symptoms. Carolin knew of the disease having developed it ten years previously in her native Germany.

Rugby star Matt Dawson, 44, developed a rash and fever after being bitten by a tick while working out at a park in Chiswick, West London in July 2015. Pictured: Matt and Carolin with son Alex, now five

‘I thought I couldn’t possibly pick up such a nasty infection just by working out in the local park,’ says Matt.

But two weeks after the bite in July 2015, a bull’s eye-shaped rash started to form around the site of the bite on his back, so he decided to go to the doctor.

‘Carolin asked if it might be Lyme disease but we were told it was an infected bite and given some antibiotic cream,’ says Matt.

Yet within days he was feeling feverish and developed a temperature. 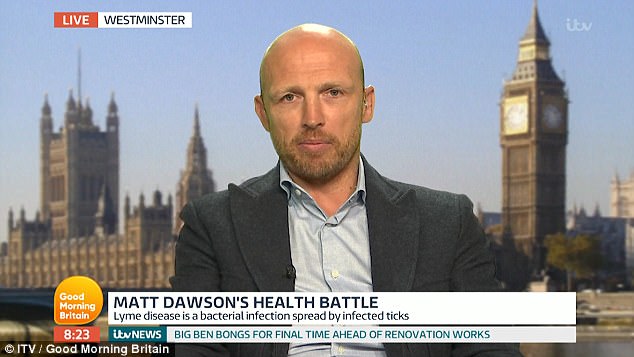 Two doctors dismissed his symptoms but blood tests eventually confirmed he had Lyme Disease – which had caused an inflammation of the heart. Pictured: Matt talking about his ordeal on Good Morning Britain

‘I felt awful,’ he says. ‘I had a splitting headache and could barely get off the couch. I ached all over. We called a doctor and I was told I just had a bad virus, and given painkillers to help with the aches and to lower my temperature.

‘Again Carolin mentioned Lyme disease and again we were told I didn’t have it since I seemed to have the classic symptoms of a virus.’

As he was due to have a routine medical days later, he decided to raise it then rather than go back to his GP.

Yet what the doctors told him at the medical left him open-mouthed.

Blood tests revealed he did indeed have Lyme disease — but it was also found that his heart was inflamed, suggesting the delay in his treatment had led to a complication of the disease called Lyme carditis. Affecting just 1 per cent of cases, it happens when bacteria carried by the tick affect the heart muscles.

‘I was absolutely astonished,’ Matt says.

‘I just couldn’t believe it when the doctor told me. I thought, why didn’t the other GPs spot it?

‘I know I’d dismissed Carolin’s original concerns. But when doctors do the same, you think you’ll be fine. I never for a moment thought I had a heart issue. I was totally thrown.’ Matt was immediately sent to the Royal Brompton Hospital in London and given intravenous antibiotics to fight the disease.

According to the NHS, around 3,000 people a year in Britain are diagnosed with Lyme disease, though the charity Lyme Disease Action believes as many as 15,000 contract it.

The disease is spread by ticks infected with the bacteria Borrelia, but the ticks are so small — often the size of a full stop on a page — that many people don’t notice they have been bitten. 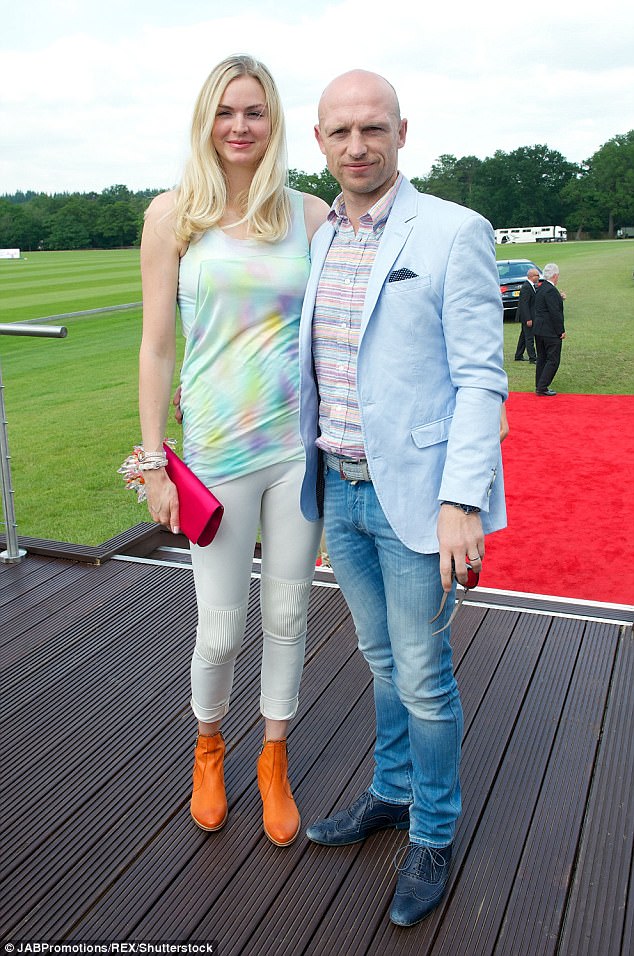 Matt’s wife Carolin knew of the disease having developed it ten years previously in her native Germany. Pictured: The couple at Ascot in 2014

Symptoms typically develop between two and 30 days later, usually starting with a bull’s eye-shaped rash that appears as the bacteria start to multiply around the site of the bite.

The bacteria then move through the bloodstream, attacking the joints and the nervous system, causing inflammation resulting in flu-type symptoms and a stiff neck. Prompt antibiotics can treat it effectively.

Some people, including supermodel Bella Hadid, believe the illness can trigger long-term symptoms and chronic fatigue syndrome, though many mainstream medics disagree.

What is known for sure is that, left untreated, Lyme disease can spread to the brain or, as Matt discovered, the heart. When Lyme disease spreads to the heart, the immune system responds to the bacteria by producing inflammation. This in turn affects the rhythm of the heart and blocks signals between the upper and lower chambers, causing the heart to beat out of sync and ‘over beat’.

Some people have no symptoms, others feel lightheadedness and palpitations.

‘What sometimes happens is that there is an extra beat after every four beats, which may feel like a beat in the chest,’ says Dr Sanjay Prasad, a consultant cardiologist at the Royal Brompton.

‘This causes extreme fatigue, as the heart is beating inefficiently.’

In Matt’s case, the Lyme carditis was causing his heart to beat an extra 30,000 beats a day.

‘An extra 30,000 beats a day is pretty extreme, as the majority of patients with Lyme carditis will have fewer than 1,000 beats extra,’ says Dr Prasad.

In the long term, the extra beats put such a strain on the heart that it can lead to heart failure, which may be fatal.

Matt was prescribed beta-blockers to try to slow his heartbeat but it didn’t fix the problem. In fact, he seemed to get worse.

‘I was tired all the time,’ he says. ‘I couldn’t do any sort of exercise — I’m used to going for a long jog or bike ride as well as working out in the gym or with a trainer. It got to the stage where even simple things like lifting the kids up were impossible. I was just so drained.

‘I had to pull out of some television recording and when I was commentating on the Rugby World Cup I had to make sure I didn’t get over-excited by the matches, as that could have made my heart beat even more. I wanted to get my normal life back.’

So in November 2015, Matt had a procedure called cardiac ablation to burn off the areas of heart muscle triggering the extra beats.

This involved having electrodes fed up to the heart via an artery in the groin. The electrodes are aimed at the part of the heart causing the problem, which is then burnt away with radio waves. Matt had the procedure under general anaesthetic.

‘Of course I was anxious about facing surgery,’ he says.

‘But what choice did I have?

Within weeks of the ablation, Matt had more energy.

In February 2016 the family’s focus took an abrupt shift when Matt and Carolin’s son Sami, now three (the couple have another son, Alex, five), had meningitis diagnosed. At one point the little boy was on a life support machine. Thoughts of Matt’s heart condition were set aside.

But in July 2016 his tiredness returned and specialists advised the ablation treatment should be repeated more extensively. ‘It was daunting, but I’m the sort of person who accepts the solutions that are offered,’ says Matt.

‘I was in hospital for three days but I did feel exhausted for a good few weeks. Not that I could complain, after seeing what our little boy had been through.’

Matt’s heart rate is now back to normal but he will need monitoring for the rest of his life. He can, he says, now take gentle exercise such as playing a round of golf.

However, although he knows he is guilty of not listening to his wife, they both feel angry that doctors were so quick to dismiss their concerns.

The former Phones4U tycoon John Caudwell says he and 15 members of his family and their associates — including daughters Rebekah and Rhiannon, ex-wife Kathryn McFarlane and son Rufus — tested positive for Lyme disease two years ago.

Rufus was healthy boy until, aged ten, he had a panic attack, went on to develop agoraphobia — a fear of open spaces — and spent the next ten years virtually bed-bound until Lyme disease was diagnosed in 2015, when he was 20.

John, 64, believes his son’s mental health issues were due to undiagnosed Lyme disease.

‘All my five children were born healthy,’ he said at the time. ‘We are a healthy family which has been turned into a wreck by Lyme disease.’

John believes the disease is not just transmitted by ticks but can be passed from a mother to her unborn baby, by blood transfusions and even potentially by sex.

He has since become a passionate campaigner, ploughing money into a charity, Caudwell LymeCo, to raise awareness of the disease and fund research into ‘the causes and how it is transmitted’.

He believes those with Lyme disease can develop co-infections, as the tick can pass on more than one type of bacteria.

Yet his family were tested in Germany, not with the standard NHS test for Lyme, and the NHS website on Lyme disease says: ‘A diagnosis of chronic Lyme disease is controversial. Experts do not agree on whether the condition exists.

‘In either case, there is no evidence to suggest people diagnosed with chronic Lyme disease can pass the condition on to others.’

‘It could have been sorted out so quickly with antibiotics,’ says Matt. ‘I don’t know what might have happened if I hadn’t been due for my own medical, where it was finally investigated properly.

‘It was different for Carolin when she had it diagnosed. In Germany they seem to react very quickly to Lyme disease.

‘In her case, they recognised the tick bite and rash and she was treated quickly with antibiotics, with no lasting effects.’

Lyme disease is easily misdiagnosed because the symptoms overlap with those of many other diseases and conditions, says Andrew Gold of the charity Lyme Disease Action.

‘If a tick bite is not noticed and the rash isn’t seen, it can take a long time for either patient or doctor to consider Lyme disease,’ he says.

Matt is supporting the Big Tick Project to raise awareness of tick-borne diseases which are becoming more common across the UK.

While the risk of Lyme disease was once thought to be limited mainly to rural areas such as the Scottish Highlands, the Lake District and Exmoor, in recent years there have been increasing reports of people developing it from tick bites in city parks — as Matt did — or even suburban gardens.

In fact, it is possible for people to catch Lyme disease in any place where there is longish grass, scrub or woodland. ‘As well as ticks, any insects capable of cutting through the skin and passing bacteria into the bloodstream can pass on the disease,’ says Dr Hany Elsheikha, an associate professor of veterinary parasitology at the University of Nottingham. ‘I have seen it passed on through a flea bite.’

There is no vaccine against Lyme disease, so prevention is the only defence.

‘You need to either avoid tick-infested areas or, if you are in grassy areas or forests, wear protective clothing — fabric impregnated with insecticide,’ says Dr Elsheikha.

‘Pet owners should check their animals for ticks and speak to a vet about having them sprayed or taking tick treatment.’

Matt has learnt the need to be vigilant the hard way.

‘This has been such an anxious and scary time for me and my family,’ he says.

‘I never imagined something as simple as a tick bite in Chiswick could reduce me to a point where I could barely walk up stairs or carry my children to bed, and lead to the need for heart surgery.

‘I just want everyone to be aware of the dangers and the symptoms so they don’t ever have to suffer the same way.’