Matt Hancock was coming under increasing pressure today to explain how why the UK’s coronavirus testing programme appears to have stalled.

The daily number of tests fell back below 100,000 yesterday, the eighth day out of 10 it has failed to reach six figures since that target was reached at the end of April.

This is despite the Government pinning much of the hope for easing the lockdown over the summer on massively increasing testing alongside a new track and trace programme.

Mr Hancock is also under pressure to ramp up the testing capacity, after Boris Johnson told the Commons he had an ‘aspiration’ to make it 200,000 per day by the end of the month.

This morning he defended sending tests to the US for processing when equipment failed in the UK, calling it an ‘excellent piece of contingency planning by my team’.

He also confirmed a new contact-tracing app would be rolled out across England in mid-May, adding: ‘We’re pleased with progress, and we’re going to bring it in.

‘And we’re going to learn the lessons from the technical improvements that we’re making from what we’ve seen on the Isle of Wight.’

But Lawrence Young, professor of molecular oncology at the University of Warwick and an infectious disease expert said: ‘The bottom line is we are creaking. It’s no one’s fault people are working really hard. But the test is complicated and it’s quite clear we are not on top of it if we have to send tests to the US.

The Health Secretary (pictured today) was told to take steps to improve the ‘trustworthiness’ of his daily updates by Sir David Norgrove, chairman of the UK Statistics Authority 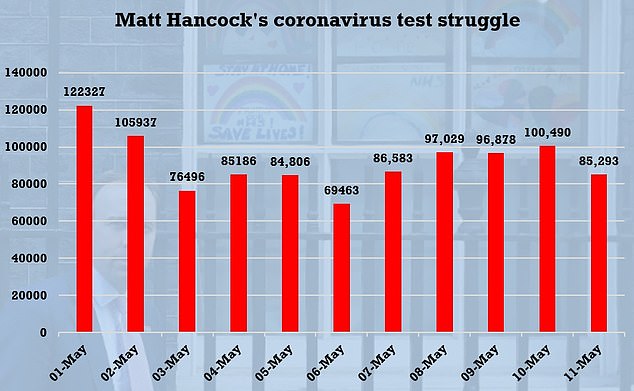 He added: ‘We need more testing, but I despair about these arbitrary targets. It’s just a way of trying to show we are doing something.

‘It’s hard to believe people don’t want a test. It seems to be more a problem with accessing one.

‘I think there has been a disconnect in that some of these drive-throughs are remote and difficult to get to. I know that in hospitals where running tests.

‘As we start to think of easing lockdown, we need to start thinking about making tests more available and what’s important is getting a better structure in the community.

‘We need a better mechanism out in the community for testing individuals, and not only people who are symptomatic.’

Paul Hunter, professor of medicine at the University of East Anglia, added: ‘At the moment we’re not yet at the next phase where we will be bringing in the track and trace.

‘And at that point it will suddenly become critically important that we have enough testing because then we can start.

It came as Mr Hancock’s testing figures were blasted by the head of the official public statistics body over a lack of clarity.

The Health Secretary was told to take steps to improve the ‘trustworthiness’ of his daily updates by Sir David Norgrove, chairman of the UK Statistics Authority.

In a damning letter to the Cabinet minister Sir David, a former Treasury economist and private secretary to Margaret Thatcher, also highlighted his target of 100,000 tests carried out by the end of April.

Mr Hancock announced 122,000 tests were completed on April 30 but they included 40,000 kits which had been posted to potential sufferers but were yet to be returned and analysed.

‘It should be clear whether the target is intended to reflect testing capacity, tests that have been administered, test results received, or the number of people tested,’ Sir David wrote.

It came as Mr Hancock and the rest of the Government faced a barrage of criticism over its lockdown plans – the easing of which depends heavily on a massive capacity for testing people across the country.

Boris Johnson last week set a target of a capacity of 200,000 tests by the end of May. 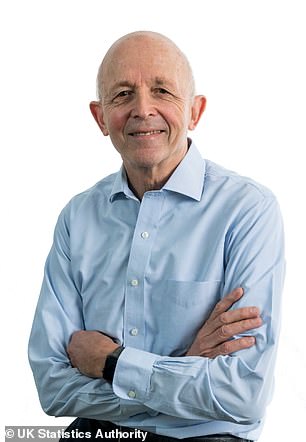 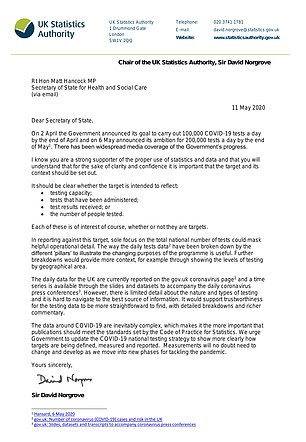 In a letter to the Cabinet minister Sir David, a former Treasury economist and private secretary to Margaret Thatcher, also highlighted his target of 100,000 tests carried out by the end of April

The Department of Health and Social Care also needs to improve how it presented this data, which forms a regular part of daily government news conferences, he added.

‘There is limited detail about the nature and types of testing and it is hard to navigate to the best source of information,’ Sir David wrote.

‘It would support trustworthiness for the testing data … to be more straightforward to find, with detailed breakdowns and richer commentary.’

It came as the number of deaths involving Covid-19 in the UK now passed 40,000, according to the latest available data.

The total includes new figures published on Tuesday by the Office for National Statistics.

These figures show that 35,044 deaths involving Covid-19 occurred in England and Wales up to May 1 (and had been registered up to May 9).

The latest figures from the National Records of Scotland, published last week, showed 2,795 deaths involving Covid-19 had been registered in Scotland up to May 3.

And the latest figures from the Northern Ireland Statistics and Research Agency, also published last week, showed 516 deaths involving Covid-19 had been registered in Northern Ireland up to May 6.

Together these figures mean that so far 38,355 deaths have been registered in the UK where Covid-19 was mentioned on the death certificate, including suspected cases.

A further 1,678 hospital patients in England who had tested positive for Covid-19 died between May 2 and May 10, according to figures published on Monday by NHS England – which, together with the total figure of 38,355 registered deaths, indicates the overall death toll for the UK is just over 40,000.