Ministers have admitted they face missing Matt Hancock’s coronavirus testing target today – as experts brand it a ‘red herring’ that has hampered the response.

Amid criticism that the UK was lagging behind countries such as South Korea and Germany, the Health Secretary dramatically pledged on April 2 that 100,000 checks a day would be carried out by the end of the month.

But while daily capacity is now over 70,000 the number of actual tests is still running at barely half the goal.

Justice Secretary Robert Buckland conceded this morning that the aim was ‘probably’ going to be missed, blaming the fact the government started from a ‘low base’ and saying he now hoped the figures would reach the mark in the next few days.

NHS Providers, which represents health service trusts, has launched a scathing attack on Mr Hancock’s handling of the situation, saying the push to hit the number has been a ‘distraction’ and led to chaotic expansion. 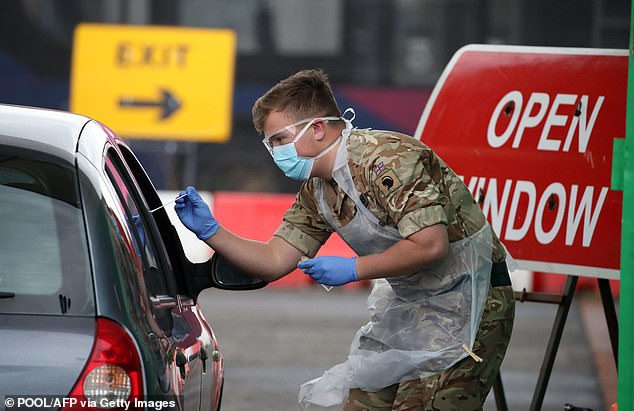 In a report, it said the English health and care system ‘started from a poor position’ as Covid-19 tightened its grip on Europe, and consistently ‘struggled’ to demonstrate a ‘clear, effective and well communicated strategy’, with a lack of clarity on who would be tested, when, how, and with what frequency.

Chris Hopson, NHS Providers chief executive, said members are becoming increasingly frustrated with the lack of clarity on how the testing regime will be developed for the next phase.

The Government remains stoic in its refusal to ease lockdown measures – despite considerable pressure from some quarters – unless its five criteria, including manageable infection rates and testing capacity, are met.

Mr Hopson said: ‘Testing is one area where, despite all the work delivered by trusts and the NHS, the health and care system as a whole has struggled to develop an effective, coordinated approach.

‘As we consider the route out of lockdown, what trust leaders need now is clarity on the testing regime from here on.

‘Setting a target for a number of tests for April 30 may have had a galvanising effect. But what matters most is an updated strategy to take us through the exit from lockdown.’

Professor John Newton, the Government’s testing supremo, said yesterday that he remained confident of reaching the 100,000 landmark by the end of April.

But latest figures announced by Foreign Secretary Dominic Raab during last night’s Downing Street press conference showed the target was some way off being met.

Some 52,429 people were tested for Covid-19 in the UK on Tuesday, despite Mr Hancock announcing a massive expansion of the groups eligible for testing earlier in the week.

The final figure for today will not be known until Saturday.

The NHS Providers report described how members felt ‘on the end of a series of frequent tactical announcements’, with ‘no visibility on any long-term strategy’.

It said: ‘They are being expected, at the drop of a hat, to accommodate these changes with no advance notice or planning, despite the fact that many of the changes have significant operational impact.’

The report added: ‘The recent public focus on whether 100,000 tests will be performed on April 30 is a red herring.’

NHS Providers described the target as ‘arbitrary’ and said it risked preventing the development of a ‘proper, next stage testing strategy’, adding: ‘It may be testing for testing’s sake.’

The report calls on the Government to update its existing testing plan – published before the perceived first peak of the virus – by addressing several matters, including how it intends to improve access for key worker testing, how it expects to prioritise who is swabbed, and how it plans to track and trace any new outbreak once lockdown is lifted. 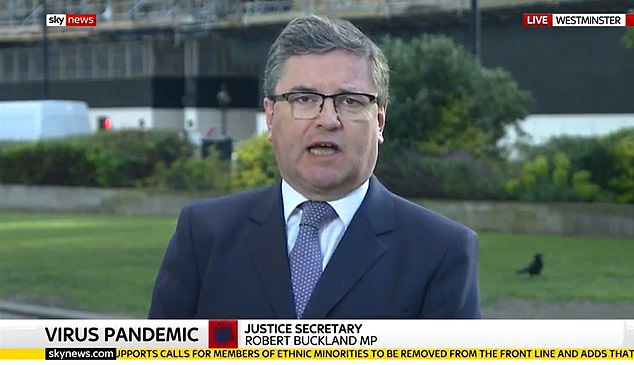 It said it would be for any subsequent public inquiry to determine why these problems have occurred and whether the response was adequate.

A Department of Health and Social Care spokesman said testing was ‘absolutely critical’ and capacity at NHS and Public Health England laboratories had more than doubled within weeks.

He added: ‘Our aim as we tackle this virus is to make it easy, fast and simple for any essential worker who needs a test to get a test.

‘In addition to setting up a nationwide network of drive in testing sites, we have introduced home testing kit delivery, deployed mobile testing units operated by the Armed Forces, and built three new ‘mega labs’ to analyse test samples.’