Health Secretary Matt Hancock has been invited for his first coronavirus vaccine appointment.

The 42-year-old said he was ‘delighted’ to have received a text from the NHS urging him to book the jab.

He tweeted: ‘This feels like a huge personal step towards normal. I got the call, I’m getting the jab.’

It comes just 24 hours after England’s rollout was opened up to everyone over the age of 42— or who have their 42nd birthday before July.

Mr Hancock said yesterday that he was ‘very excited’ to get his invitation, hailing the rollout for going ‘extraordinarily well’.

The age limit in England was dropped to 44 on Monday, with the scheme expected to widen even further to people in their 30s next week.

People are being invited via text from ‘NHSvaccine’, which includes a web link to the health service’s online booking service.

Latest vaccination figures show almost 34million Britons — more than half the entire population — have received at least one dose. Some 13.2m have been fully vaccinated.

But the number of first doses being administered each day has fallen from a peak of 750,000 to just 90,000 yesterday after supply dips meant officials had to focus on meeting second dose targets. Around 305,000 top-ups were dished out yesterday. 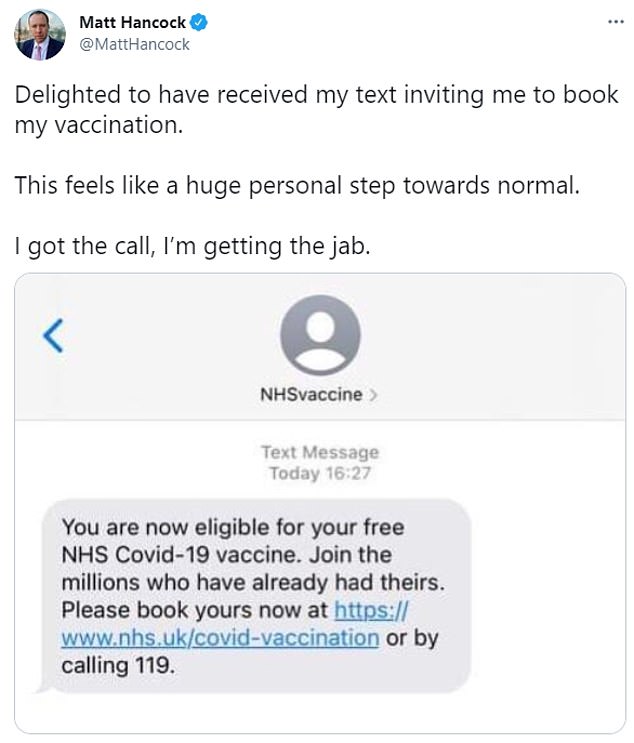 It comes after a major Government analysis found a single dose of vaccine slashes the risk of spreading coronavirus to someone you live with by up to half.

Not only does the jab reduce a person’s chance of catching Covid in the first place, it greatly reduces their chances of passing it on, should they get infected.

Nearly 70% of adults in England now have coronavirus antibodies

About seven in 10 adults in England have coronavirus antibodies, according to official data that suggests the majority of the population now has immunity against the disease.

A major Office for National Statistics (ONS) testing survey today revealed 68.3 per cent of people had the virus-fighting proteins in the week ending April 11, up from 53.1 per cent a fortnight prior.

The results highlight the success of the huge vaccination drive, which has seen almost 34million Britons — more than half the entire population — receive at least one dose. Some 13.2m of them have been given both injections.

Antibody levels are likely to be even higher now because millions more have been jabbed since the blood tests were conducted more than a fortnight ago, and it takes about two weeks for immunity to kick in.

Their presence in the blood generally means someone has some at least some protection against the disease and won’t fall ill. But they are not the only part of the immune system.

The research by Public Health England (PHE) which involved almost 1.5million adults is the first of its kind to confirm the effectiveness of the vaccines in curbing the virus’s ability to spread.

The new study on transmission of the virus found that adults who received the Pfizer vaccine – but still caught the virus – were 49 per cent less likely to spread it to other household members than those who weren’t inoculated.

The results for the Oxford/AstraZeneca jab were not quite as good but nonetheless, those who received it were 38 per cent less likely to transmit it to others in their household.

But the fact that both vaccines dramatically reduce the virus’s ability to spread – as well as preventing serious illness – offer renewed hope that they hold the key to a return to normal life.

They have already been shown to reduce coronavirus hospitalisations and deaths by 80 per cent after one dose, rising even higher after full immunity.

Mr Hancock said: ‘This is terrific news, we already know vaccines save lives and this study is the most comprehensive real-world data showing they also cut transmission of this deadly virus.’

It comes after Boris Johnson said yesterday that the ‘road ahead looks positive’ as separate figures revealed Covid deaths have plummeted 97 per cent since the second peak.

Previous analysis had already confirmed the jabs were excellent at preventing severe disease and death but one of the unanswered questions was how much they stopped transmission.

Scientists have repeatedly warned a jab that is poor at halting the disease’s spread meant there was always a risk of the virus circulating in high numbers and eventually spilling into the small number of vulnerable people who aren’t jabbed or for whom the jabs don’t work.

On PHE’s latest analysis, Mr Hancock added: ‘It further reinforces that vaccines are the best way out of this pandemic as they protect you and they may prevent you from unknowingly infecting someone in your household.

‘I urge everybody to get their vaccines as soon as they are eligible and make sure you get your second dose for the strongest possible protection. This is a huge national effort and we will beat the virus together.’

Professor Openshaw, a member of the Covid-19 clinical information network, described the results as ‘very, very reassuring and ‘certainly better than many of us expected just a few months ago’.

He told the BBC Radio Four Today programme: ‘It shows that the immune system is doing something a lot more than we were expecting of it really.’

He said it is known from other studies that infection is ‘typically much milder’ in people who have been vaccinated and added that with two doses the outcome is ‘almost certainly going to be even better’.

The jabs’ ability to prevent virus transmission kicked in after just 14 days and they worked regardless of a person’s age or the number of people within their household, with whom they had close contact.

Dr Mary Ramsay, head of immunisation at PHE, said: ‘Vaccines are vital in helping us return to a normal way of life.

‘Not only do vaccines reduce the severity of illness and prevent hundreds of deaths every day, we now see they also have an additional impact on reducing the chance of passing Covid-19 on to others. I encourage anyone who is offered a vaccine to take it as soon as possible.

‘While these findings are very encouraging, even if you have been vaccinated, it is really important that you continue to act like you have the virus, practise good hand hygiene and follow social distancing guidance.’