Matt Hancock has urged England to stay vigilant after a major surveillance study claimed the rate of decline in coronavirus cases has slowed, and infections could even be rising in London and the South East.

The Health Secretary said the results were ‘some cause for concern’ that the ‘hard-won progress’ of the last two months could be at risk. ‘It is important we remain vigilant – this is on all of us,’ he added.

‘We have set out a cautious, but irreversible approach to easing restrictions but until we reach each milestone, we must all remember the virus is still here, and still dangerous.

‘Please continue to stay at home – practice hands, face, space – and get your jab when you receive your invite so we can bring down infections further.’

Infection rates were lowest among the over-65s, who are most likely to have been vaccinated.

But the REACT-1 study – a key measure of the UK’s outbreak – warned the rate of decline appeared to be slowing, with the time taken for cases to halve climbing from 15 to 31 days during February.

Experts said the slowdown is likely to be due to more people venturing outside as they anticipate a relaxation of restrictions.

The paper is watched closely by ministers because it relies on random swabbing of more than 165,000 people across the country, meaning it may be able to gauge infection rates among people who aren’t going for tests out of fear of being asked to self-isolate.

NHS Test and Trace data showed 68,738 people tested positive for Covid in England between February 18 and 24, an 18.7 per cent decrease compared to the previous week.

But the fall was not as high as that recorded during the previous seven-day spell (21.1 per cent) or the week before that (28.2 per cent), bolstering fears that Covid rates are not dropping as quickly as they were.

The study found around 0.5 per cent of English population was carrying coronavirus from February 13 to 26, which was down significantly from the start of the year when it was close to 1.5 per cent – one in every 67 people 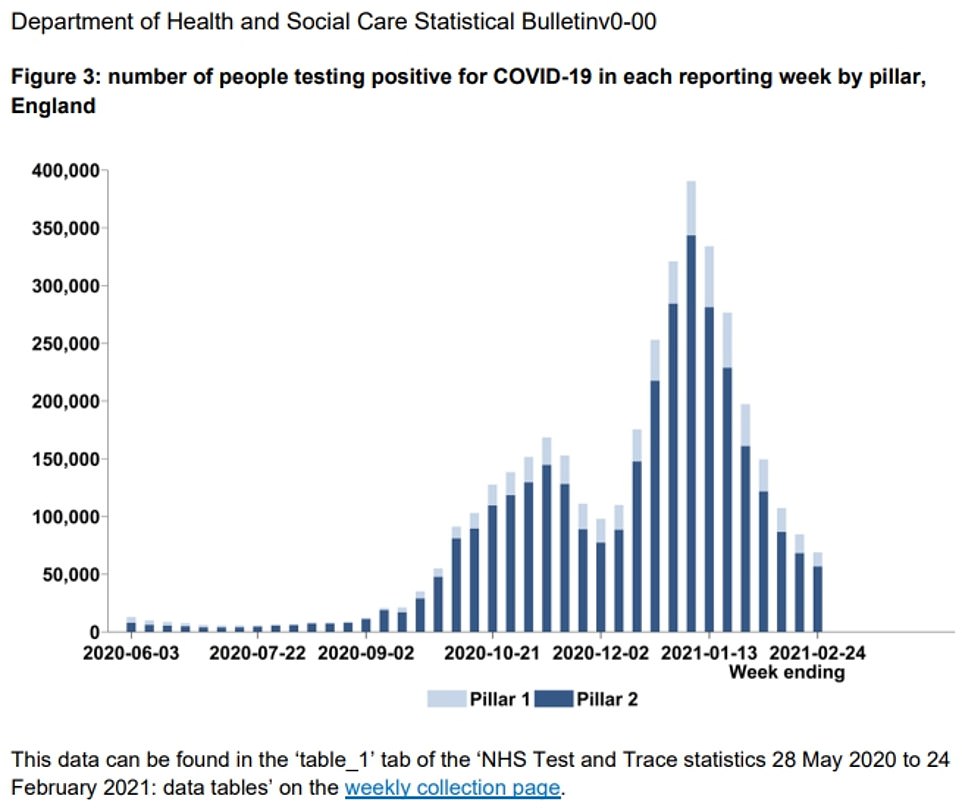 Covid cases are continuing to drop in England but the speed of decline has slowed. There were 68,738 positive tests in the week ending February 24, down 18.7 per cent on the previous week 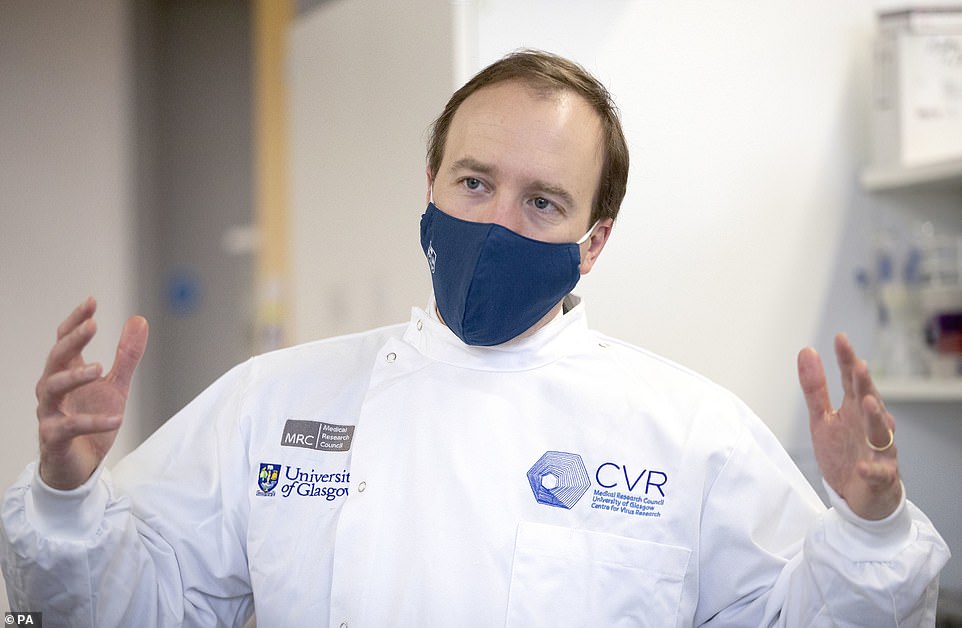 Health Secretary Matt Hancock today urged England to stay vigilant and warned the nation’s ‘hard-won progress’ could be ruined. Pictured today during a visit to the Centre for Virus Research at Glasgow University 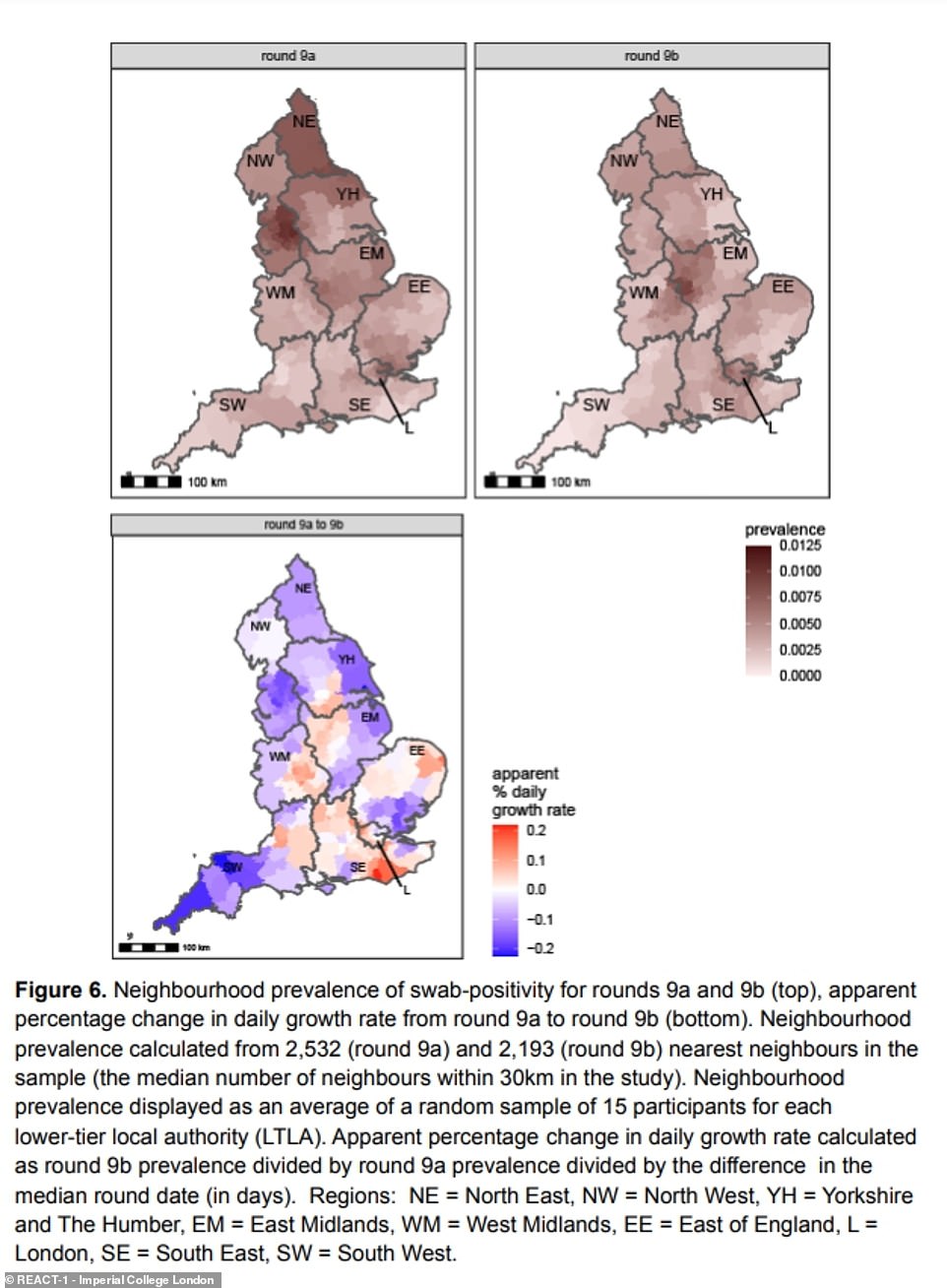 Imperial researchers said infection rates were falling in most areas (highlighted in blue on the third map) but rising in some parts, particularly in London and the South East. Hotspots that stood out in earlier versions of the study had faded and new ones emerged, the top maps show 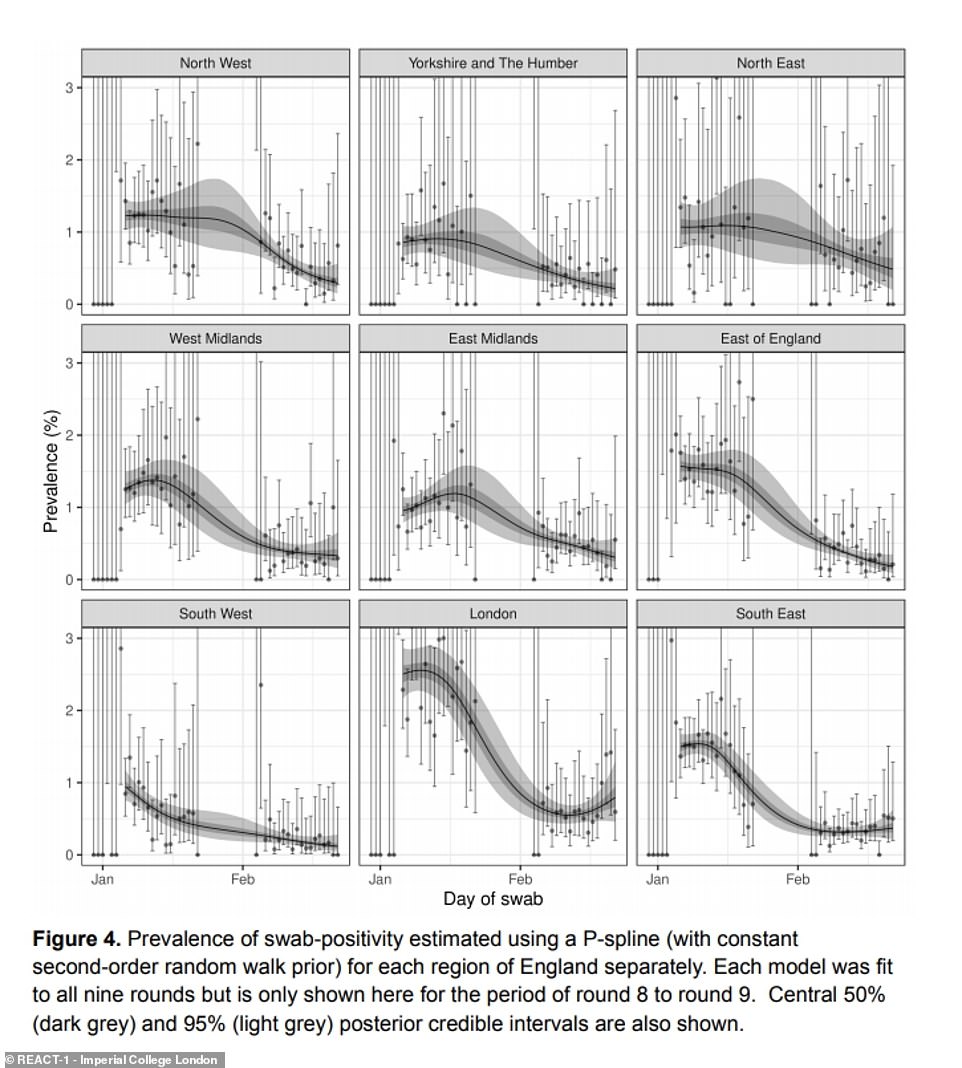 The REACT study saw infection rates coming down in most regions but said there were early signs of an uptick in London and the South East. These were based on only a few days’ data but the researchers said they were 80 per cent sure the trend had reversed. They could not explain why 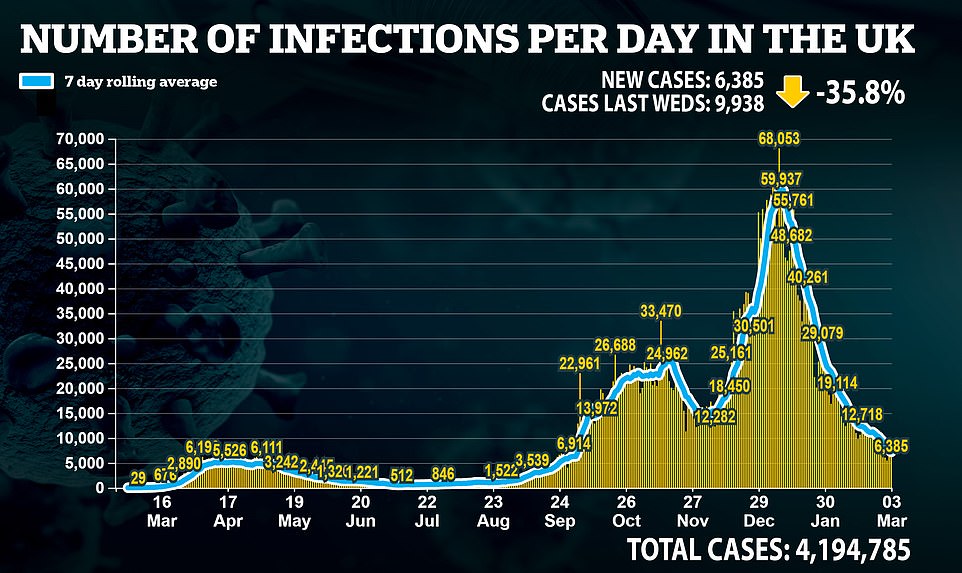 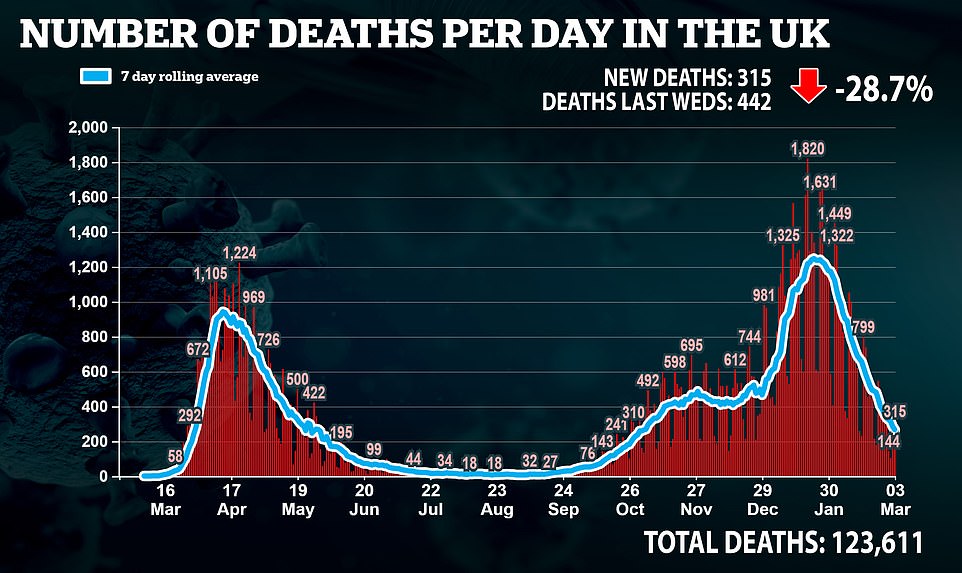 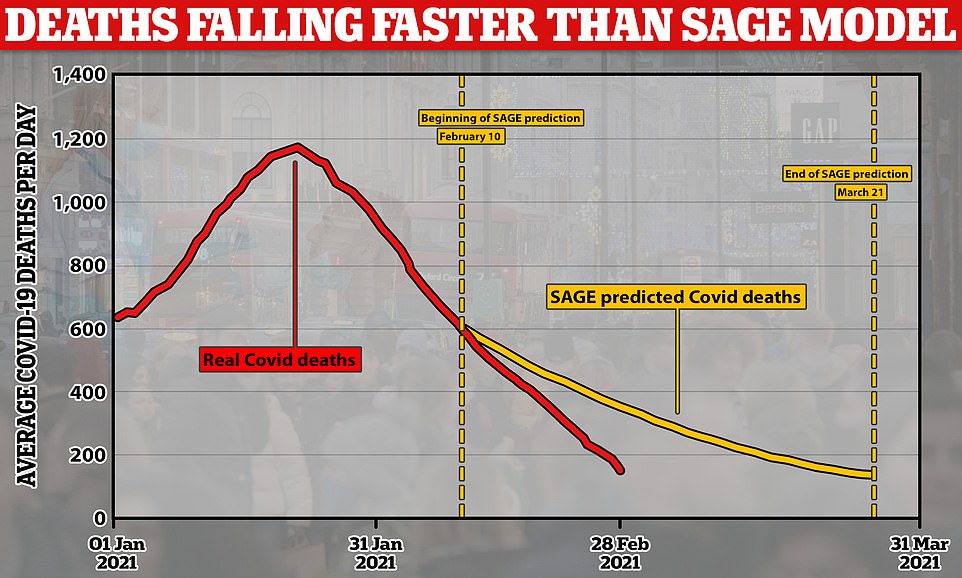 A prediction made by SAGE sub-group SPI-M at the start of February suggested daily Covid deaths in England would stay above 200 until the end of March but they are already lower. The yellow line shows SPI-M’s prediction, while the red line represents the actual daily death count, calculated as a seven-day average

Covid deaths in England are falling faster than gloomy SAGE advisers thought they would, official data show — and scientists claim lockdown rules could be loosened faster.

Models produced by the SPI-M group of scientists predicting the future of the Covid outbreak in February suggested the daily death count would stay above 200 until mid-March.

But the average number of victims recorded each day had dropped below this level before the end of February, statistics show.

Experts told The Telegraph the progress is ‘better than expected’ and suggested the Government’s ‘data not dates’ approach could see relaxations brought forward.

The vaccine rollout has made immense progress, with 20million people now vaccinated across the UK, and studies suggest the jabs are working better than expected, preventing between 85 and 94 per cent of hospitalisations.

SPI-M’s prediction was more pessimistic about how well the vaccine would work and whether it would stop transmission, which may explain why its estimates are gloomier than the reality.

Under current plans, schools will reopen next Monday, and people will be allowed to meet in groups of six outdoors from March 29.

The survey also suggests the R rate – a measure of how many people an infected person passes the virus on to – is around 0.86 and ‘reliably’ below one, indicating the epidemic is shrinking.

Infection rates vary around the country, with an apparent fall in cases in four regions during February, no change in one and a rise in London and the South East.

It continues: ‘Continued adherence to social distancing and public health measures is required so that infection rates fall to much lower levels.

‘This will help to ensure that the benefits of the vaccination roll-out programme in England are fully realised.’

The study says there is clear progress but warns: ‘Any large uptick in the prevalence of infections would signal a potential threat to the smooth continuation of the roadmap.

‘But with high vaccine uptake and encouraging early estimates of vaccine efficacy, the link between infections and strain on healthcare services will likely be weakened in the near future.’

Imperial’s Professor Steven Riley said the pace of the roadmap ‘seems about right’.

He added: ‘What we need is to keep infections really low, so that people who will get offered a vaccine, three or four weeks from now or six weeks from now don’t get infected just before they get the vaccine because for those people that amazing vaccine story won’t have done that much.’

Professor Paul Elliott, also from Imperial, said: ‘People might think that they can just relax because the vaccine programme is going so well but there is still a lot of virus out there.

‘If people just change their behaviours a little bit then they are going to be more at risk of getting infection, because it’s all about social contact, social distancing.

‘So I think we just, in a very cautious way need to continue – but we need to keep monitoring what’s happening to the virus in the population.

He added: ‘We’re still in lockdown. We’re going through a cautious easing of lockdown, with taking stock, looking at interventions, and then having a chance to look at the effect of those interventions on the spread of the virus.

‘So I would be very hopeful that it will continue to go down and, it does need to go down because it is still too high.’

The report detail rates among different ethnicities and occupations for the first time.

It found rates were highest among Pakistani participants at 2.1 per cent, compared with 0.45 per cent among those who are white and 0.45 per cent who are black.

Those who work from home are a third less likely to catch the virus.

This ‘stresses the importance of working from home during lockdown where possible to minimise social contacts and hence reduce the risk of transmission’, the report warns.

The findings have not been peer-reviewed or published in a journal. 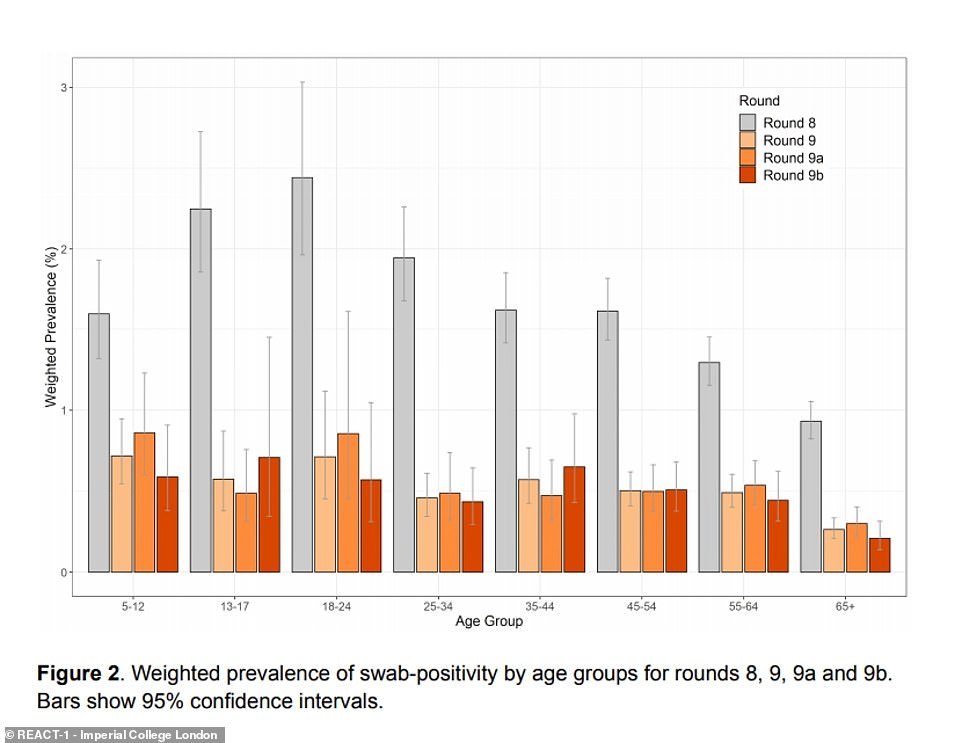 Infection rates among age groups plummeted between January (grey) and February (orange and red), the study found, but the decline had slowed significantly since then 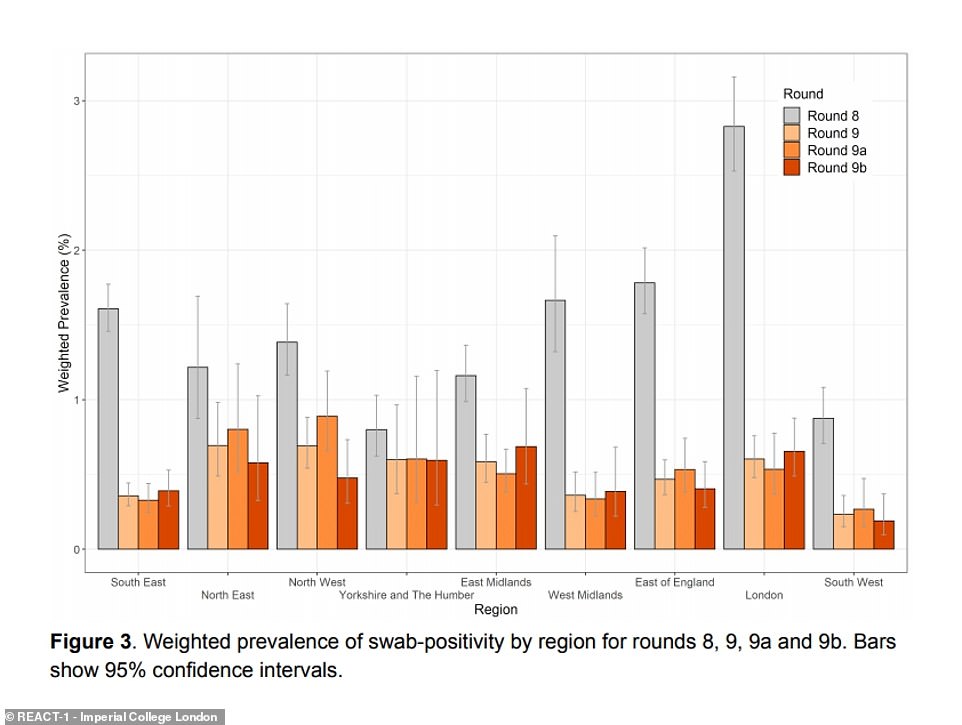 Most regions saw a huge drop in infections when lockdown hit, with early case rates in grey and later ones in orange and red

GPs to prescribe DIETS for more than 700,000 people to fight Covid

Ministers said they are committed to slimming the country’s waistlines, after an alarming study revealed a high obesity rate was partly to blame for Britain’s devastating coronavirus death toll.

World Obesity Federation research found Covid deaths have been 10 times higher in countries where at least half of adults are overweight, and they have accounted for a staggering 90 per cent of global deaths.

Thousands of lives may have been saved if the population was slimmer, experts said, and lockdown measures may not have needed to be as drastic if people were not as fat and had a lower risk of ending up in hospital.

The World Health Organization warned the findings were a ‘wake-up call’ for the West, where sedentary jobs and processed foods mean being overweight has become the norm for many.

Downing Street said it would pump money into NHS-led schemes to help people of all ages lose weight, with the drive particularly targeting children and people living in poorer areas.

Prime Minister Boris Johnson — who previously admitted he was ‘too fat’ when he was hospitalised with Covid last spring — said: ‘Losing weight is hard, but making small changes can make a big difference.

‘Being overweight increases the risk of becoming ill with Covid. If we all do our bit, we can reduce our own health risks – but also help take pressure off the NHS.’

The WOF report found that significant proportions of Covid deaths happened in fatter countries like the UK and US which, combined, have suffered around 643,000 deaths from the virus – a quarter of the world’s total.

It comes as figures show two in five over-80s have broken lockdown rules by meeting up with others indoors after getting vaccinated against Covid, figures suggest.

Office for National Statistics polling data released today revealed 43 per cent of the elderly have flouted virus-controlling restrictions after having a jab.

Nearly half admitted to meeting friends or family indoors after receiving both doses of the vaccine, even though this is still not allowed.

Under rules introduced in England in January, family or friends cannot meet socially indoors unless they are in the same household or support bubble.

Separate households will not be allowed to meet inside in groups until May 17 at the earliest in England, according to Boris Johnson’s roadmap out of lockdown.

But 878 of the 2,041 vaccinated over-80s surveyed across England between February 15 and 20 admitted to either visiting a friend or having someone over to their home since being jabbed

The group were ‘appearing to break lockdown regulations’, according to the ONS.

Some 2.6million over-80s had been vaccinated in England by February 21, according to the latest data.

A small number of over-80s received their coronavirus vaccine before the national lockdown was reintroduced but the vast majority will have been jabbed after January 5.

The poll showed 23 per cent of inoculated over-80s met up with their children and nine per cent felt safe enough to see their grandchildren.

Six per cent met up with friends indoors but a third had not seen anyone — including their support bubble or carers — despite having had a jab.

Almost half (49 per cent) of the over-80s surveyed said they felt Covid was a major risk to them personally before having the vaccine.

Of all over-80s surveyed, 96 per cent said they would be very or somewhat likely to encourage others to get a jab.

Some 99.8 per cent of respondents said they had been offered a jab, and 78 per cent had received their first dose more than three weeks ago.

This is despite ministers saying jabs had been offered to everyone over the age of 80.

Tim Gibbs, from the ONS, said: ‘The rollout of the Covid vaccination is, no doubt, a huge relief to many people aged over 80.

‘We can see almost half of all them, when asked, considered Covid to be a major or significant personal risk before receiving the vaccination.

‘This decreases to just five per cent having the same concern after hypothetically receiving both doses of the vaccine.

‘It will hopefully also improve a wider quality of life for this group.

‘We hope to start to see these wider positive effects of the vaccine rollout as it continues across more age groups in the coming weeks.’ 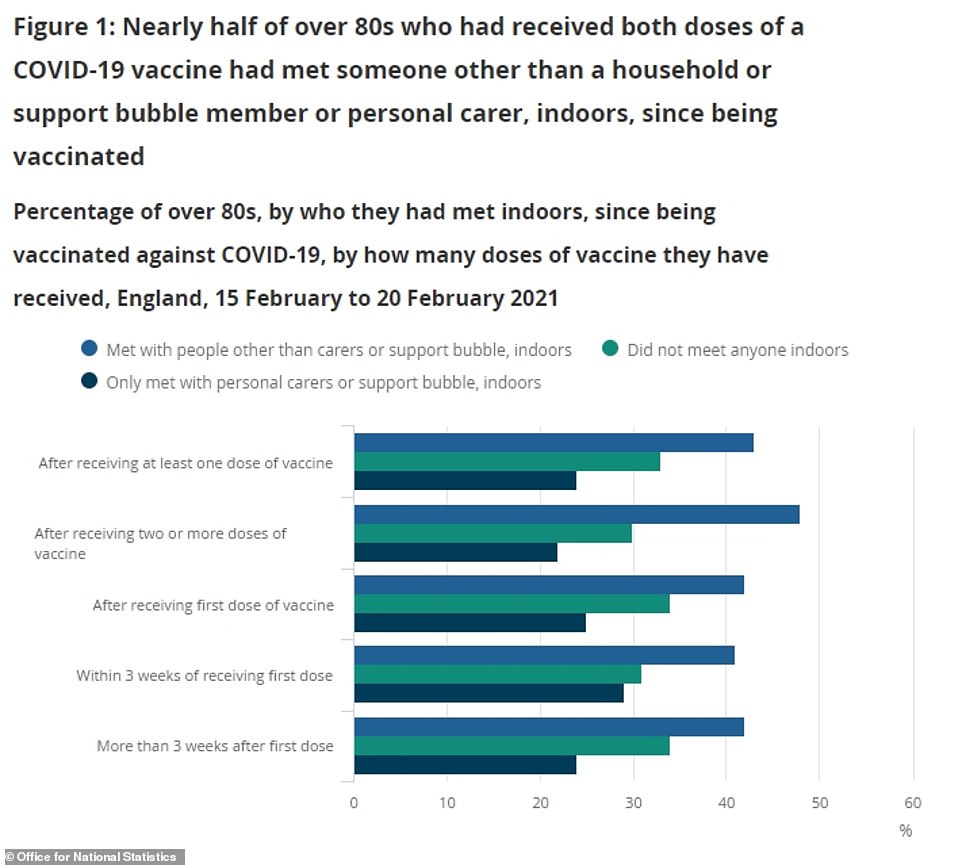 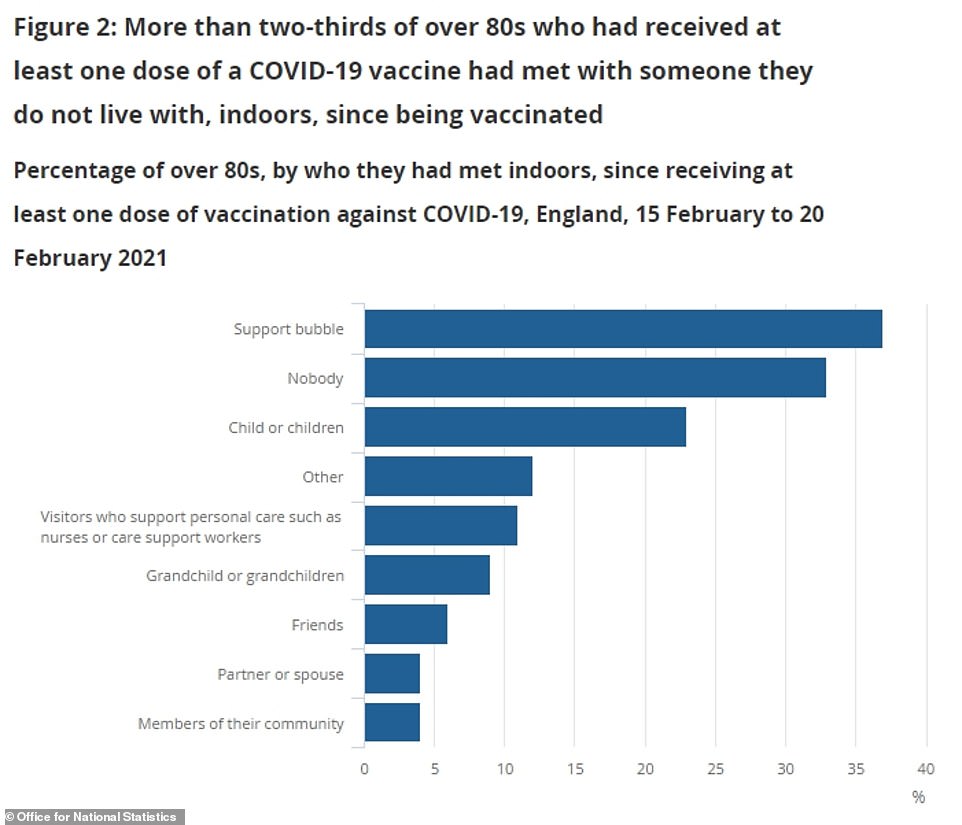