‘He has nothing but time on his hands’: Insiders claim Matt Lauer is ‘not doing well’ new life after being fired from the Today show for sexual misconduct

Former NBC host Matt Lauer is still ‘struggling to come to terms with his new normal’, more than a year after being fired from the Today show over allegations of sexual misconduct.

Lauer, who recently turned 61, now ‘has nothing but time on his hands’ and spends his days at home with his three children, socialising with a few select close friends.

The first year since he was fired for alleged sexual harassment ‘has been hard for him’, a source told People, adding that Lauer ‘is not doing well.’

Time and pizza: Lauer, pictured earlier this year,  now  spends his days at home in The Hamptons, Long Island, with his three children during his divorce proceedings

Lauer was fired from NBC’s Today show after a series of complaints about sexual misconducts and allegations of sexual harassment and assault.

According to a report released by NBC at the time, Lauer ‘admitted to engaging in sexual activity’ with one anonymous woman who had made a complaint,

NBC chairman Andrew Lack said in a statement after Lauer’s termination that the sexual harassment complaint in question had ‘represented, after serious review, a clear violation of our company’s standards.’

Out: Matt Lauer was fired after a series of complaints about sexual misconducts and allegations of sexual harassment and assault 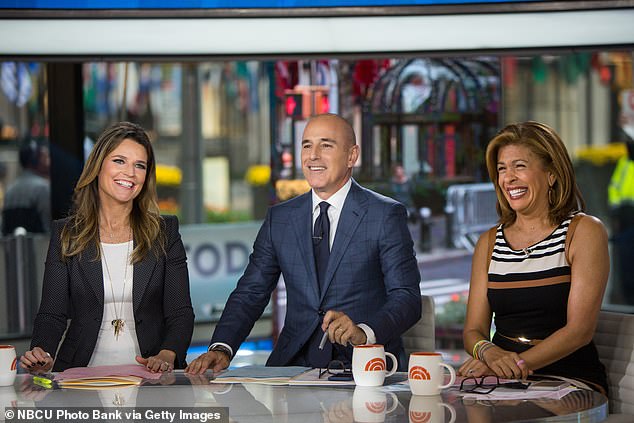 Before: Lauer with Savannah Guthrie and Hoda Kotb on the Today show in October 2017, a few weeks before he was fired

It has been reported that Lauer is living in the guest house of the Long Island compound he shares with Ms Roque and their three children: sons Jack, 17, Thijs, 11, and daughter Romy, 14.

Lauer spent two decades as a Today co-host, and in his heyday with Katie Couric was part of the most successful anchor team in morning show history.

Before his firing his net worth was estimated to be at least $60million.