Matt Richards is the teenage swimmer who trained in a paddling pool!

The teenage swimmer who trained in a paddling pool! Matt Richards, 18, battling through icy temperatures and boredom in a one-metre deep pool to claim a dream ticket to Tokyo

By Rob Cole For The Mail On Sunday

Matt Richards managed to keep on swimming through lockdown last year — without leaving his back garden.

Faced with 10 weeks out of the water, the teenager spent £1,000 on a king-size paddling pool he bought on the internet and set it up on his lawn.

The 18-year-old attached a bungee rope to a hook on his garage, linked to a body harness and swam for two hours a day in what he described as ‘a swimming treadmill’.

His reward for battling through icy temperatures and boredom in his 5 x 3 metre, one-metre deep pool were two Welsh records and a dream ticket to Tokyo to tackle the world’s fastest swimmers in the 100 metres freestyle.

‘When lockdown was announced I had to go home to the Midlands from my training base in Bath. When I heard I wasn’t going to be able to train in the water I thought I was going to go insane,’ said Richards, the European Junior 100 freestyle champion.

‘I went online and found myself what was essentially a massive paddling pool and put it up outside the garage in my back garden. 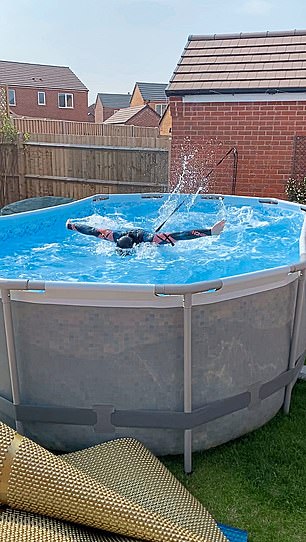 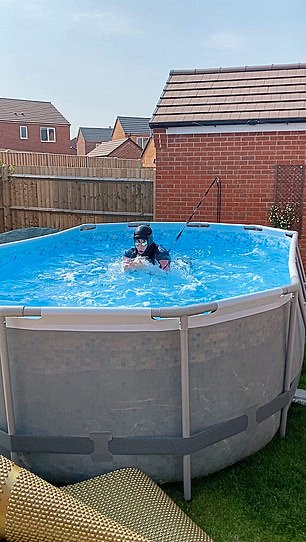 ‘I attached a bungee rope to the garage wall and tied it to a harness on the other end that I wore in the paddling pool. Then I spent hours every day just swimming stationary.

‘It was essentially a swimming treadmill, but that’s how I got through the first 10 weeks when we were out of the pool.

‘It allowed me to maintain my feel for the water, kept me fit and, from a psychological point of view, helped keep me sane.’