USMNT goalkeeper Matt Turner was No. 1 in Sportscenter’s not top 10 at college but after not letting Wales, England or Iran score, he’s played his part in the USA recording multiple shutouts at a World Cup for the first time in 92 YEARS

Matt Turner has helped the USMNT make history in Qatar, as the team has posted multiple clean sheets at a World Cup for the first time since 1930 – and the transformation from his college days is striking.

The milestone comes after the USA’s nervy 1-0 win vs. Iran on Tuesday, as Iran put pressure on the Americans but Turner faced just one shot on target.

And while Turner wasn’t tested too often in Group B, he responded brilliantly when necessary.

Wales and England registered just three shots on target each in draws against the US, though Turner made highlight saves on attempts from Mason Mount and Ben Davies to prevent surefire goals.

The only goal Turner – and the USMNT backline – conceded was Gareth Bale’s late penalty in the 1-1 tie vs. Wales.

USA fans will not be shocked by Turner’s performances in Qatar, as he’s acquitted himself well across 23 caps, while he’s made a promising start to life as Arsenal’s No. 2 as well.

But at one point in his career, the now 28-year-old Turner earned widespread attention for the wrong reason.

During his time playing for Fairfield University in Connecticut, Turner horribly misjudged an attempt from distance that struck the crossbar, as he failed to catch the ball in the air and it instead bounced off his chest into the goal.

As the opposing Iona Gaels celebrated the end of the game, Turner dropped to the ground in despair. 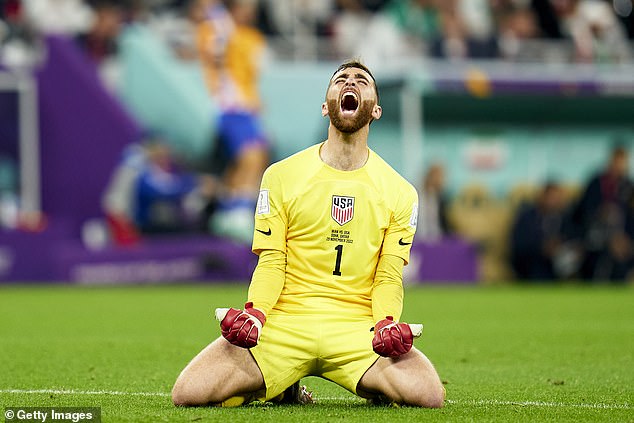 Matt Turner didn’t hide his emotions as the final whistle blew after the USA’s win vs. Iran

The error even landed him on Sportscenter’s ‘Not Top 10’ segment.

More than nine years since that blunder on Tuesday, Turner’s knees were on the turf again as he emphatically celebrated the win vs. Iran.

And fans took to Twitter to marvel at his incredible path to the World Cup.

‘Such a crazy story, the determination of this man is unreal,’ one said in response to a tweet charting his improbable rise. ‘So happy for him!’

‘HE believed. And that’s the only thing that matters,’ another beamed.

Another fan added, ‘#totalstud – So glad he didn’t let anyone hold him back- total class act!’

‘Scary part is there are so many other players out there starving for the chance,’ a different fan also said. ‘Credit to who ever gave him a chance after Fairfield and believing in him.’

With the result, the USMNT have moved to the round of 16 and will face the Netherlands on Saturday.

The USA finished second in Group B, edging out third-place finishers Iran and finishing behind first-place England. Wales finished last with one point.