The brand behind Barbie has launched a new line of dolls that are ‘gender inclusive’.

Toy goliath Mattel says the new Creatable World doll kits are entirely ‘free of labels’, offering the children playing with them clothes that include both skirts and trousers and long and short hairstyles.

The company says the range is simply a response to what modern children are asking for; saying ‘kids don’t want their toys dictated by gender norms.’

Physically, the dolls appear gender neutral after Mattel consulted pediatricians on how they should look.

The Creatable World dolls made by toy giant Mattel; the new range sees each doll come with two switchable hair styles and a range of clothes 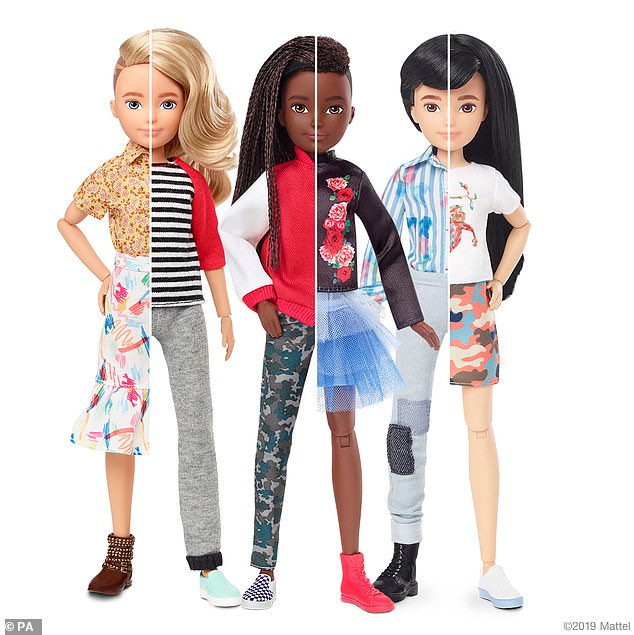 There are six different skin tones to choose from; Mattel, which makes the Barbie doll brand, said the line was a response to children who don’t want their toys dictated by gender norms 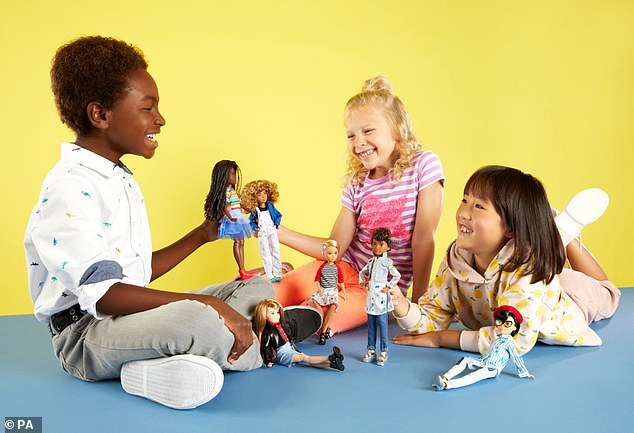 Switch it up: each doll comes with two separate hair styles and a range of clothes

The Creatable World range comes with clothing options, accessories and wigs to allow children to style the doll with short or long hair, or in a skirt, trousers or both.

Mattel said it worked alongside a ‘dedicated team of experts, parents, physicians and most importantly, kids’ to create the six different kits in a variety of skin tones.

Each kit includes one doll, two hairstyle options and can be styled however the child chooses.

Kim Culmone, senior vice president of Mattel’s doll design, said: ‘Toys are a reflection of culture and as the world continues to celebrate the positive impact of inclusivity, we felt it was time to create a doll line free of labels. 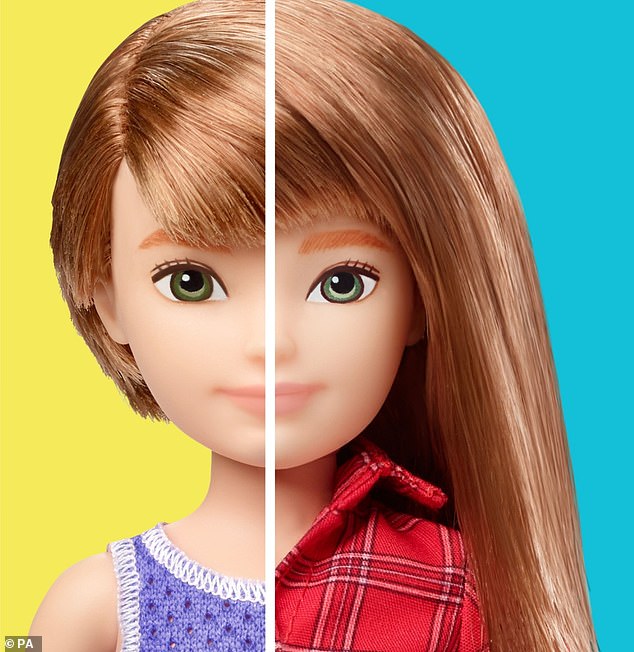 Two hairstyles and a ‘gender inclusive’ wardrobe: how Mattel’s dolls are changing

Each one comes with two wigs and clothes that would traditionally have been regarded as masculine or feminine including skirts, trousers. Hair styles are short and long.

The Creatable World dolls come with a range of outfits including skirts and trousers, and children have two hairstyles to choose from in the kit that comes with each doll

The brand consulted US paediatrician Cara Natterson on what the dolls’ physiology, proportions and size should be.

Natterson praised Mattel for creating the line, saying: ‘A collection like this just knocks down every barrier to play.’ 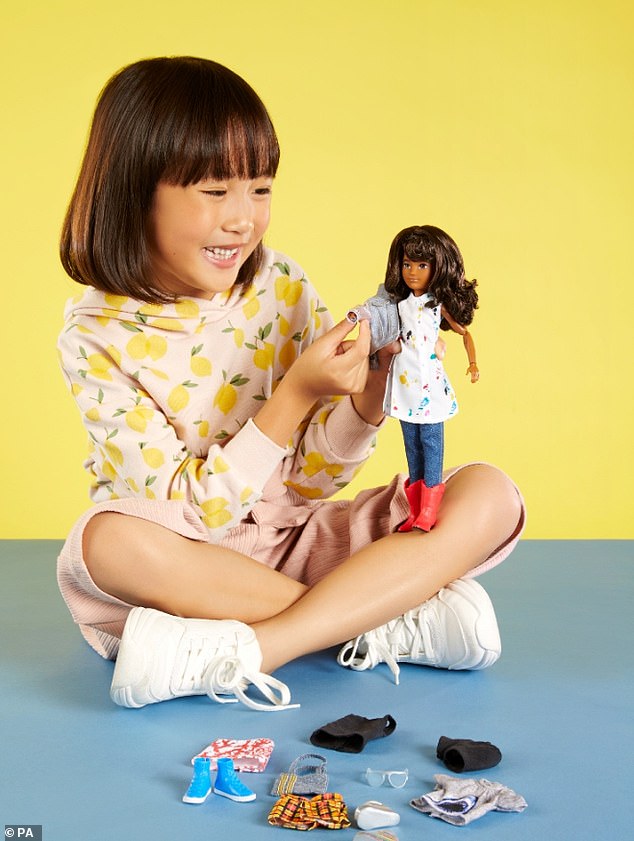 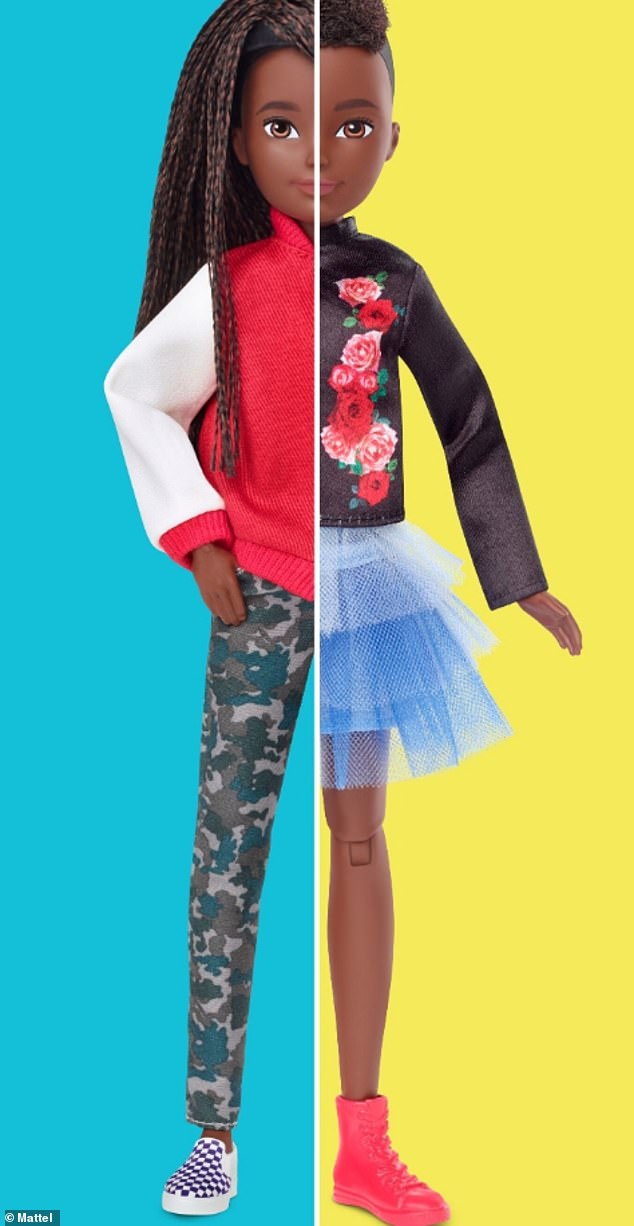 Barbie manufacturer Mattel says the dolls ‘knocks down barriers to play’. Pictured: How a Creatable World doll could look with different clothes and hair 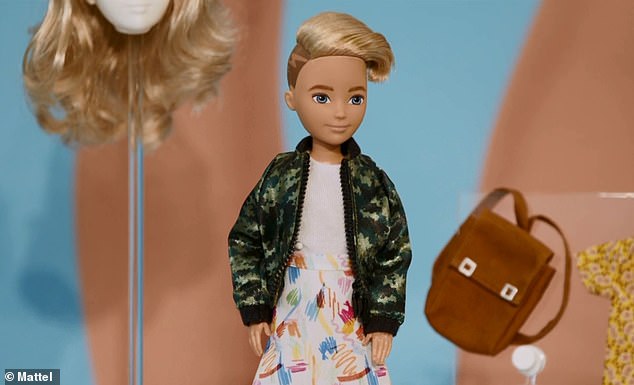 One of the hairstyles in the Creatable World range; the dolls are ‘free of labels’, say Mattel

Senior vice president of design for Barbie and fashion dolls at Mattel, Kim Culmone, said: ‘We felt it was time to create a doll line free of labels’ 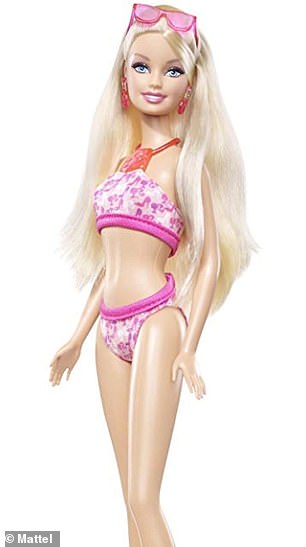 The brand consulted US paediatrician Cara Natterson on what the dolls’ physiology, proportions and size should be.

Natterson praised the brand for creating the line, saying: ‘A collection like this just knocks down every barrier to play.’

‘Through research, we heard that kids don’t want their toys dictated by gender norms. This line allows all kids to express themselves freely which is why it resonates so strongly with them.

‘We’re hopeful Creatable World will encourage people to think more broadly about how all kids can benefit from doll play.’

The doll kits come at a recommended retail price of £34.99.

Earlier this year, Barbie fans praised Mattel for releasing a black doll in a wheelchair who wears her natural hair — and the inclusive toy even comes with a ramp that fits inside her Dreamhouse.

Retailing for $19.99, the doll debuted at the New York Toy Fair in February as part of the toy company’s 2019 Barbie Fashionistas line.

The collection celebrates diversity as well as realistic expectations of beauty, and people have been taking to Twitter to say they’re thrilled to see that Barbie Fashionistas doll #133 is not only in a wheelchair but is also a woman of color. 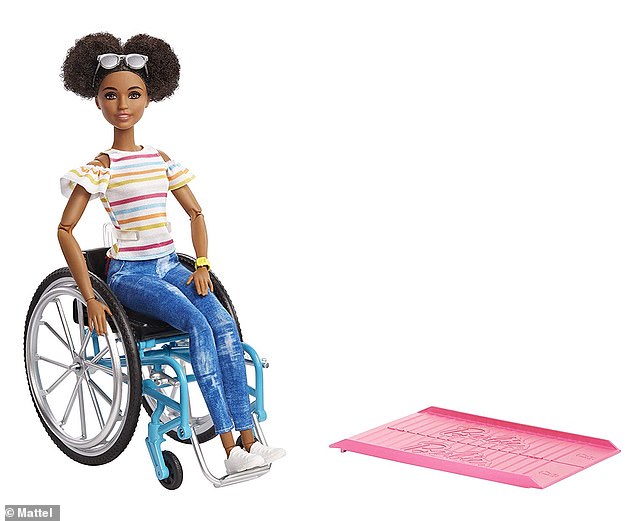 Inclusive: Mattel has debuted a new black Barbie doll who uses a wheelchair at the New York Toy Fair earlier this year

Barbie, whose name comes from a shortened version of Barbara, celebrates its 60th birthday in 2019 and was originally designed to show young girls that they could dream big.

The doll was invented by Ruth Handler, the co-founder of Mattel, who was inspired by her own children to create the doll.

Nathan Baynard, director of global brand marketing for Barbie said: ‘Her daughter Barbara was limited in the choices of her toys – the only ones were baby dolls,’ Baynard recounted.

‘The only role she could imagine through that play was caregiver, [or] mother,’ whereas Handler’s son ‘could imagine being an astronaut, cowboy, pilot, surgeon.’

Barbie, whose name comes from a shortened version of Barbara, was designed to show young girls that they could dream big.

It was made to teach girls ‘that they had choices, that they could be anything. In 1959, it was a radical idea!’ he added.