A British student jailed for spying in the Gulf was dramatically pardoned yesterday – but only after being forced to confess to being an ‘MI6 captain’.

Matthew Hedges, 31, was among scores of prisoners freed as part of a clemency tradition to mark the United Arab Emirates’ National Day.

As he prepared to fly back to the UK this morning, his elated wife, Daniela Tejada, 27, tweeted a picture of the couple with the words: ‘I’ve been brought back to life’.

Her husband was arrested on May 5 in Dubai on his way home from a two-week research trip for his PhD thesis into the security policies of the Gulf.

He was held in solitary confinement for five months before being jailed for life.

Matthew Hedges elated wife, Daniela Tejada, 27, tweeted this picture of the couple with the words: ‘I’ve been brought back to life’

Yesterday a video of the Durham University student confessing his ‘active field role’ with British intelligence was played to a Press conference in Abu Dhabi.

A spokesman for the UAE government said Mr Hedges had been set free – but insisted he was ‘100 per cent a full-time secret services operative’.

However Miss Tejada insisted he is not a spy. She thanked the media for highlighting his case and said: ‘That he is returning home to me and the rest of his family is much more than I was ever expecting to happen this week.

‘It’s taken me by surprise and I’m just so happy and so relieved and really incredulous that it is happening finally. It has been an absolutely nightmarish seven months and I just can’t wait to have him back. 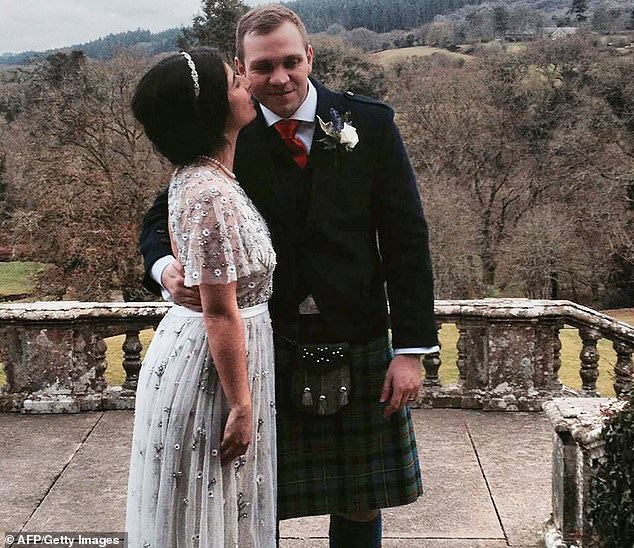 ‘We are absolutely elated at the news.

‘In my heart, I know what Matt is, he’s a PhD researcher. His colleagues know it, and his family know it and hundreds of academics round the world know it. The most important thing now is that we will have him back home.’

Yesterday the UAE’s rulers announced that a request for clemency by Mr Hedges’ family had been ‘graciously granted’.

But government spokesman Jaber al-Lamki stressed he was not going home an innocent man, declaring: ‘Mr Hedges has been found guilty of espionage. He was here to steal the UAE’s sensitive national security secrets for his paymasters.’

To back up his point, he showed a ten-minute film of video clips of Mr Hedges ‘confessing’ his MI6 mission. The first showed a judge in a courtroom asking Hedges his rank and he answers: ‘It is Captain.’ Although MI6 is Britain’s overseas spying operation, its intelligence officers do not hold military ranks.

The clip moved to what appeared to be an investigation room and Mr Hedges wearing a short-sleeved blue shirt, and he said: ‘I have an active field role…’ In another clip, he says he was gathering information not from the ‘top top top’ leadership of the UAE, but from officials.

‘I approached them as Matthew Hedges the PhD student – and when I got the information it becomes MI6,’ he says, snapping his fingers. When asked about the information he gathered, he said: ‘What new technologies are they looking into, what do they see as a security threat – and then there is the military of course.’ When the investigators asked if anyone knows about him or his job, he said: ‘No…no one else knows. No one but you guys.’

The video clips were grainy and garbled, and jumped around to different locations suggesting they were edited together without any context or continuity.

The short clip about him being an MI6 ‘captain’ was set in a courtroom, suggesting it was filmed recently and could even have been the final ‘price’ Mr Hedges had to pay for being set free.

Independent scrutiny is impossible because journalists at the hastily-convened Press conference were not allowed to film the video footage and the government has not released it. 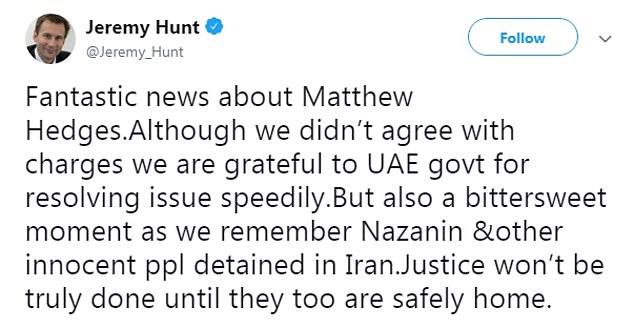 Last night a friend of Mr Hedges and his wife branded the video confession ‘an embarrassment’ to the UAE, saying: ‘They are just trying to save face with their own people.

‘They are laughable, the accusations they have given. They have a video, but we all know the coercion that has gone into it. It wouldn’t stand up in any court. It’s completely ridiculous.’

But the Emirati spokesman claimed: ‘The information Mr Hedges collected went far beyond standard academic practice. In fact, Mr Hedges took advantage of the openness granted to academic researchers in this country. 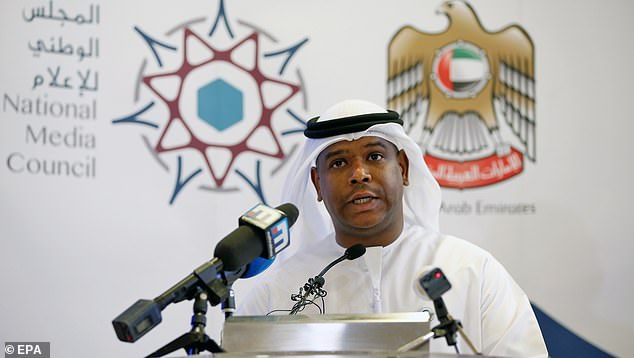 At a press conference today (pictured) UAE official Jaber Al Lamki said he had video of British student Matthew Hedges confessing to being a spy, but said it had pardoned him

‘During the investigation, it emerged that Mr Hedges has been using two different identities to gather information from his targets.

The state-run WAM news agency alleged Mr Hedges sought information for British intelligence on weapons systems, economic data, details about the UAE’s war in Yemen and ‘sensitive information on key government figures, including members of the UAE ruling families and their networks’.

The Emiratis have denied a claim that Mr Hedges was forced to sign confessions in Arabic after weeks of brutal interrogation without a lawyer or access to consular assistance from the British embassy.

Yesterday Mr Hunt said Britain did ‘not agree’ with the UAE’s insistence that Mr Hedges is a spy.

He said: ‘We’ve seen no evidence to support these accusations.’

Mrs Zaghari-Ratcliffe, 40, has been in an Iranian prison since being arrested in April 2016 as she and her daughter prepared to return to Britain.

Her husband Richard Ratcliffe and Miss Tejada have been in contact during the campaign she waged to secure Mr Hedges’s release.

Now Miss Tejada wants to work to help him get his wife back from Iran.

Mr Ratcliffe said last night: ‘Daniela has had a really strong and clear campaign that has done great things to bring her husband home.

‘I was very impressed with the clarity, honesty and strength she brought to the campaign. I welcome this offer.’

He added: ‘What’s really important is also the shared experience that you can’t explain to other people. It would be good for us to organise an event together in the future, but first she needs to catch up with her husband.

‘It’s such a great day for them, but also for us, because it’s the hope.’