Matthew McConaughey may be preparing his children for careers in photography.

On Wednesday, the actor’s wife Camila posted a photo to her Instagram account depicting two of the couple’s children taking pictures of their dad.

The image showed 12-year-old Levi and 10-year-old Vida using their phones to get some good snaps as they had their father sitting on top of a set of rocks next to a small pool. 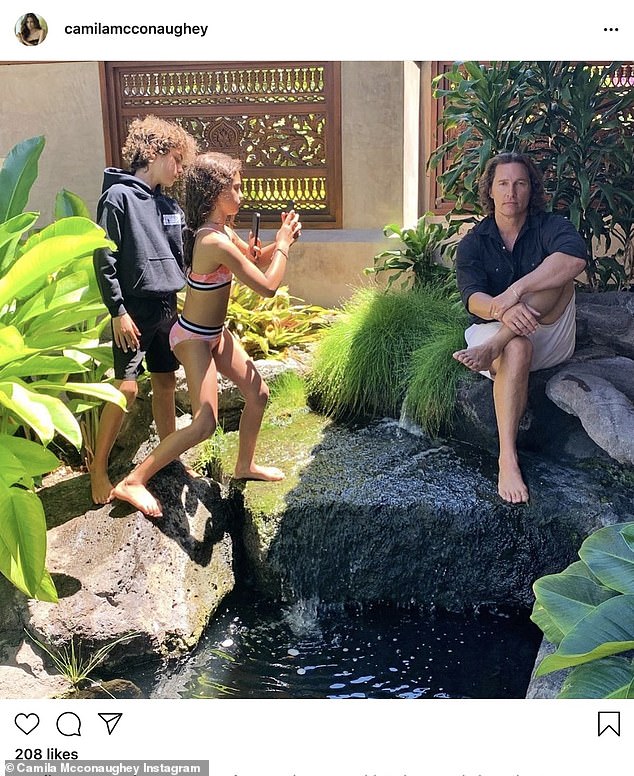 Prepping for a career: Matthew McConaughey’s kids Levi and Vida were seen taking some pictures of their dad in a post made to their mom Camila’s Instagram account on Wednesday

The 51-year-old actor was seen wearing a black button-up shirt with a pair of beige shorts; Levi wore a black hoodie and matching trunks, while Vida opted for a pink bathing suit.

Their 38-year-old mother wrote in the caption: ‘Because of quarantine we couldn’t do normal photoshoots so our kids have become the professional photographers for Matthew’s latest magazine covers! It’s amazing to see what they have done!’

The native Brazilian also rewrote the caption in Portuguese for her followers from back home.

In addition to their two children seen in the photo, the couple share an eight-year-old son named Livingston. 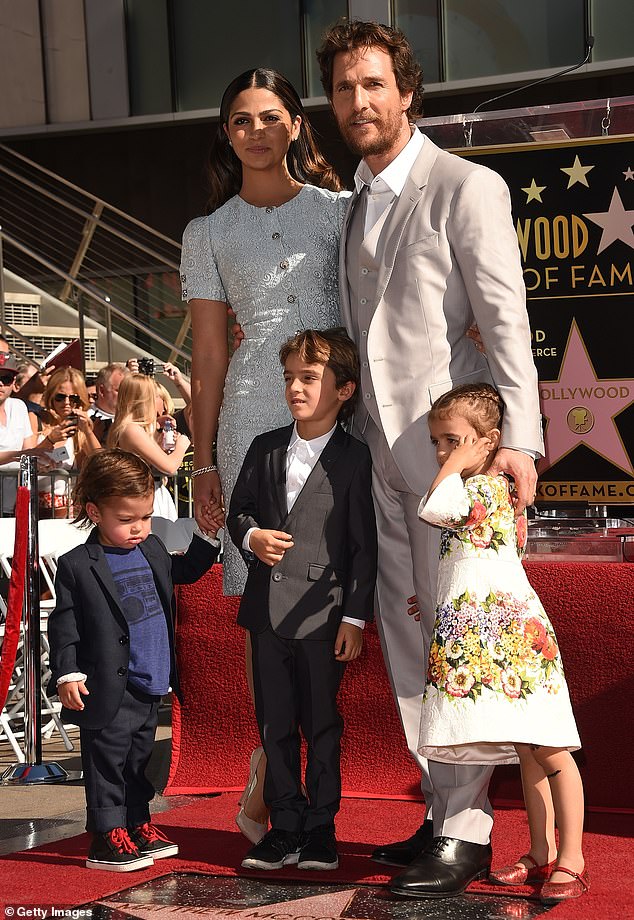 Staying close: McConaughey and his wife have been married since 2012 and share three children together; the family is seen in 2014

The couple first met in 2006 and became engaged in 2011 before tying the year afterwards in McConaughey’s hometown of Austin, Texas, where the two still reside.

McConaughey began his career acting in small parts in television and film before landing his breakout role in the 1993 coming-of-age comedy Dazed And Confused, where he portrayed a suave young man who still hangs out with teenagers.

He then went on to take on roles in various film projects spanning multiple genres, including the 1997 sci-fi drama Contact and the 1999 satirical comedy EDtv.

Beginning in the early 2000’s, the actor began to take on roles in predominantly romantic comedies, including The Wedding Planner and How To Lose A Guy In 10 Days, before changing up his image in an effort to curb his typecasting. 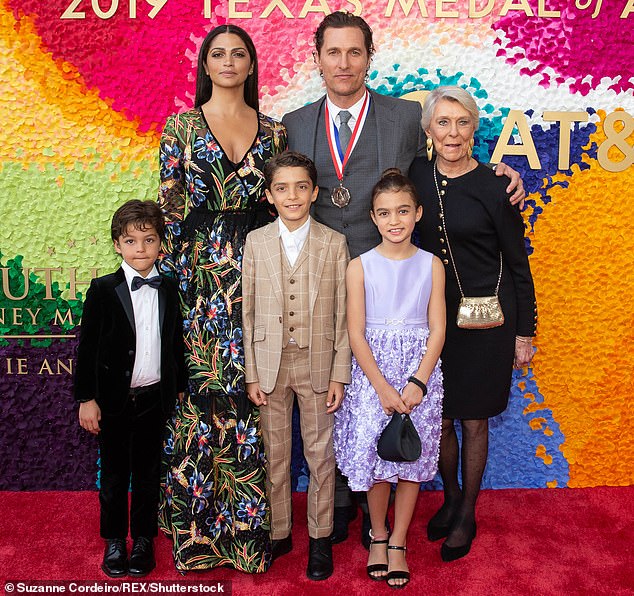 Staying together: The actor reportedly has a close relationship with his mother Kay McCabe; she is seen with the rest of the McConaughey family in 2019 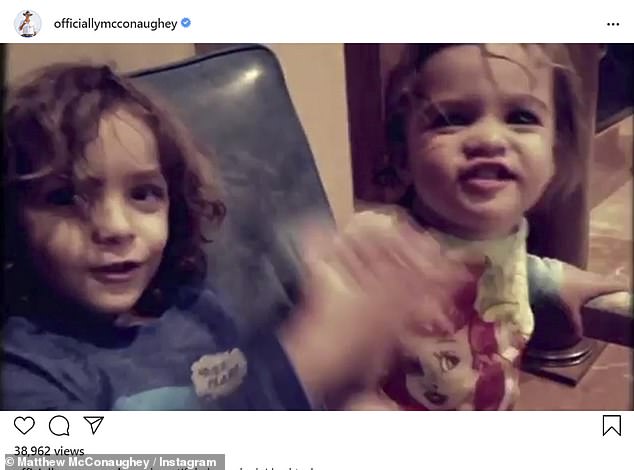 A happy family: The actor and his wife welcomed their first child together in 2008, with their other two following in 2010 and 2012, respectively

In 2013, McConaughey portrayed medicine dealer Ron Woodruff in the biographical drama Dallas Buyers Club, which gained him both a Golden Globe and an Academy Award for Best Actor.

The actor garnered further acclaim for his role in the 2014 sci-fi epic Interstellar; the film won the Academy Award for Best Visual Effects and was nominated in four other categories.

The star of The Beach Bum has expanded his pursuits beyond acting, as he was named a professor of practice for the Department of Radio-Television-Film at his alma mater, the University of Texas at Austin.

McConaughey has also been involved with various philanthropic efforts, reportedly taking in lost animals after the events of Hurricane Katrina. 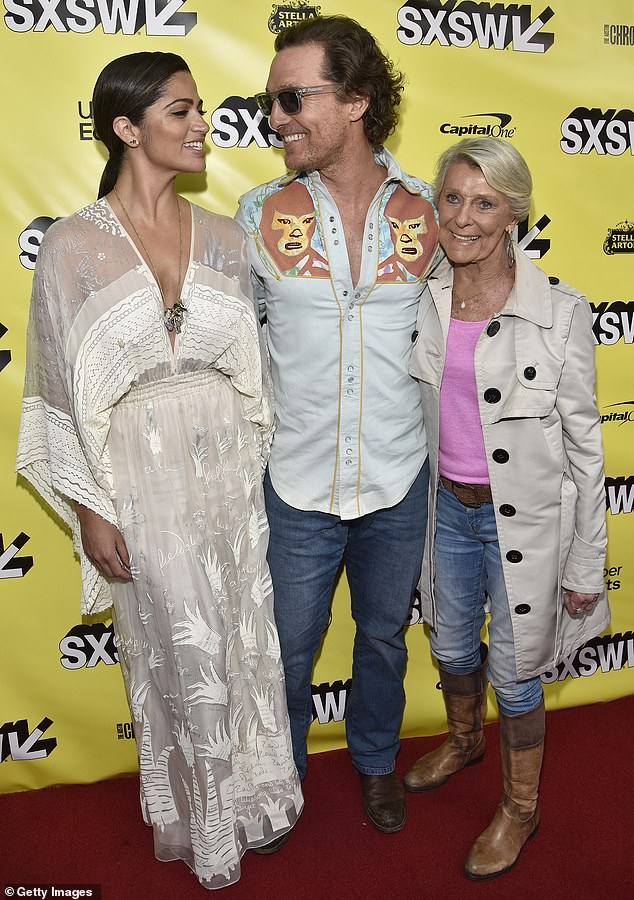 Just the adults: McConaughey, his wife, and his mother are all seen at the premiere of The Beach Bum in 2019