Outgoing Secretary of Defense Jim Mattis handed Donald Trump his resignation letter at the White House on Thursday during an argument after he realized he couldn’t convince the president to reverse course and leave American troops in Syria.

His first order of business when he got back to his office was to tell aides to print 50 copies of the letter, ordering them to distribute them as soon as Trump announced his departure.

Reporters got the letter at the same time Mattis’ most senior generals did, just minutes after the president tweeted his rose-colored interpretation of the letter’s thinly veiled venom.

Hours later, Trump announced a partial withdrawal from Afghanistan, pulling out half of the 14,000 U.S. troops out of a conflict he has long claimed America should never have entered.

The president asked back in 2011, years before he began to flaunt his political ambitions: ‘When will we stop wasting our money on rebuilding Afghanistan? We must rebuild our country first.’

Outgoing Secretary of Defense James Mattis (left) make a final attempt Thursday, before resigning, to convince President Donald Trump that it was unwise to pull all of America’s military troops out of Syria 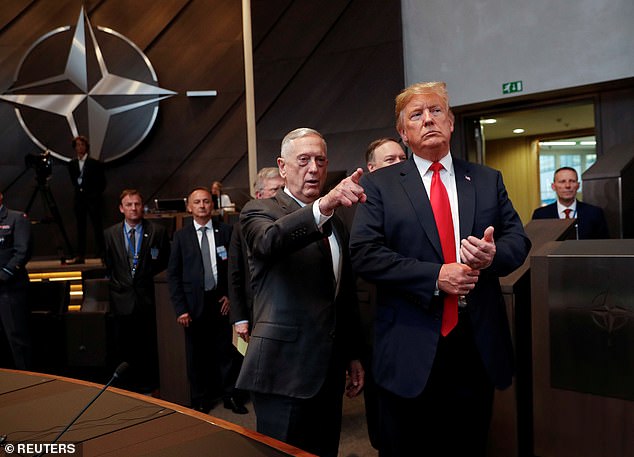 Farewell to arms? Mattis, a former U.S. Marine Corps general, told aides to print 50 copies of his resignation letter and distribute them to top brass – and the press – as soon as Trump announced his departure 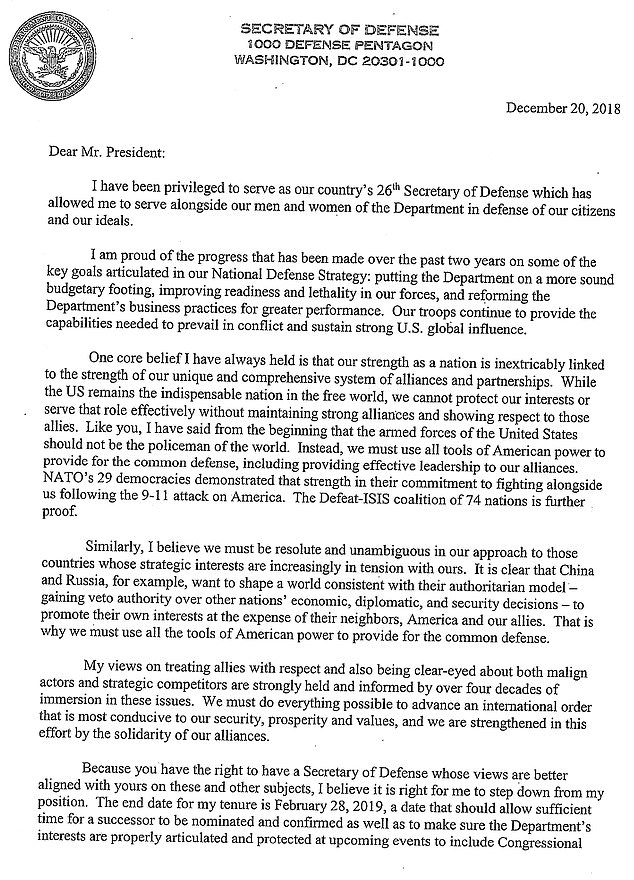 In his resignation letter, Mattis spelled out his strategic differences and said Trump should find a defense secretary he agrees with more

Mattis, a famously well-read and edurite ‘warrior-monk,’ wrote in careful prose about America’s failure to tend to its crucial international alliances and partnerships, concluding that Trump should find a replacement whose views aligned more with his own,

The president tweeted his thanks for the retired Marine Corps general’s help with ‘the purchase of new fighting equipment’ and ‘getting allies and other countries to pay their share of military obligations.’

The White House hasn’t denied that Mattis quit as a direct consequence of Trump’s announcement, over his objections, that America’s troops stationed in Syria would be pulling out.

That decision will leave large swaths of Syria unguarded against efforts by Vladimir Putin’s Russia to prop up strongman Bashar al-Assad in his bloody civil war with rebel groups. 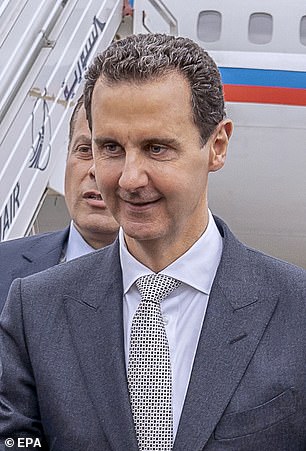 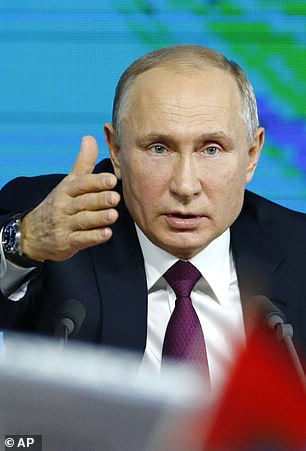 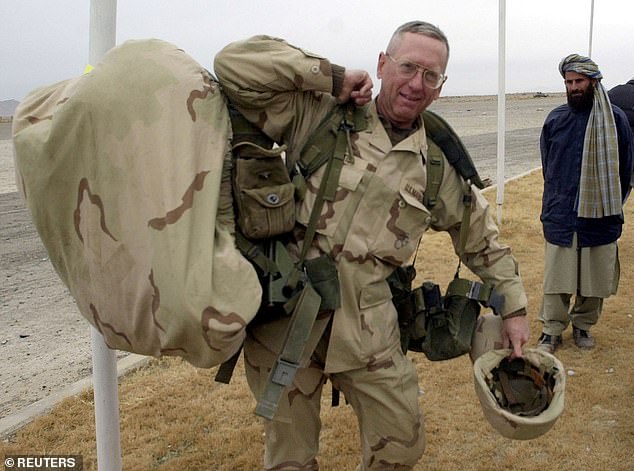 Mattis was a Marine’s Marine, carrying his own pack as a brigadier general 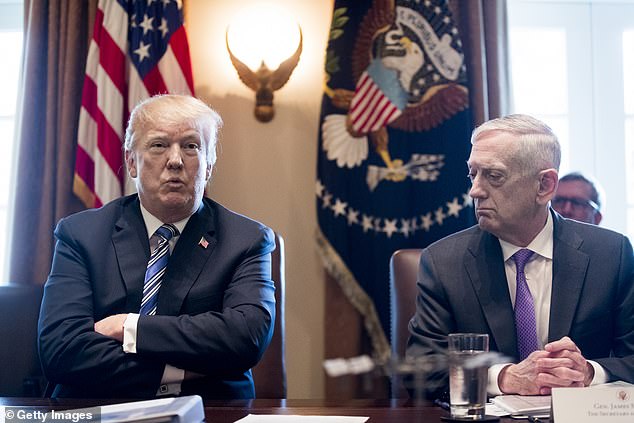 In clear references to Russia and China, he wrote about four decades of ‘immersion’ in global affairs, leading him to believe in ‘treating allies with respect and also being clear-eyed about both malign actors and strategic competitors.’

At the White House, Press Secretary Sarah Huckabee Sanders told a crush of reporters that Mattis made the decision about the timing of his announcement.

‘He and the president have a good relationship, but sometimes they disagree,’ she acknowledged, responding to a question about the Syria troop pullout’s role in the defense secretary’s departure. 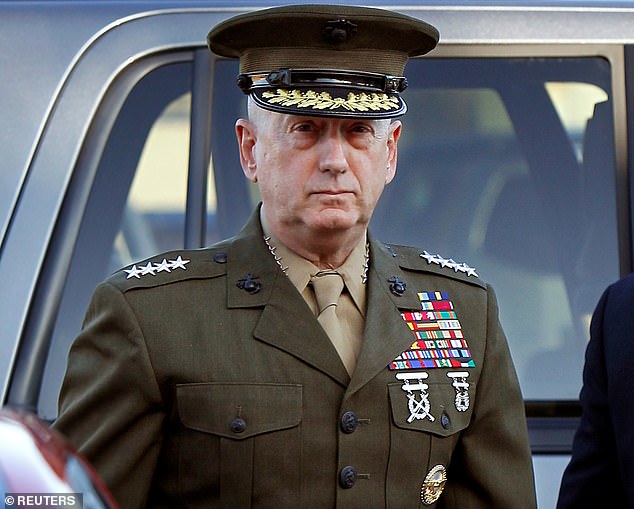 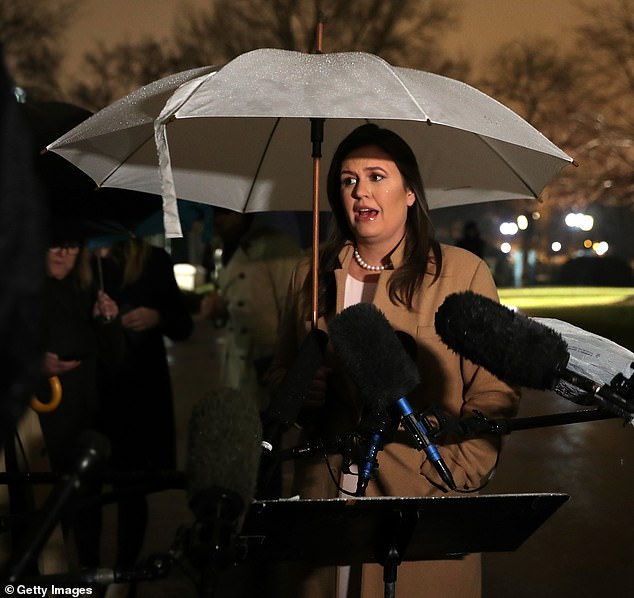 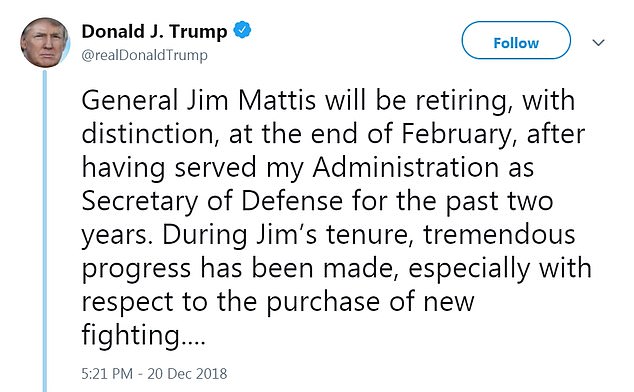 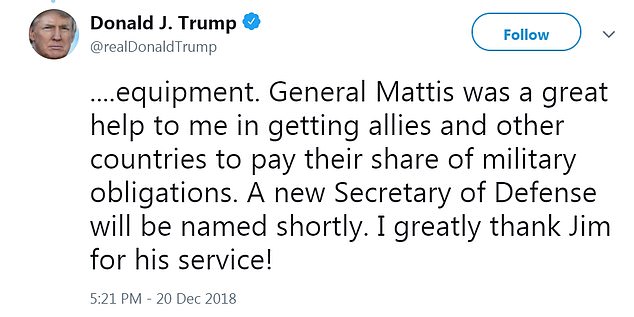 The president stunned Washington with his announcement, making it on Twitter instead of in an official statement

Trump made waves Wednesday at the Pentagon by announcing his withdrawal of America’s mid-size military contingent stationed in Syria.

The decision, reached Tuesday in a small group meeting at the White House, didn’t include consultation with Gen. Joseph F. Dunford Jr., the chairman of the Joint Chiefs of Staff.

Mattis and Secretary of State Mike Pompeo were in the room. Both objected.

Trump declared this week that his administration has won the war against the ISIS terror army, even though the Pentagon has said the group still has 30,000 soldiers in Iraq and Syria.

Reactions to Mattis’ announcement fell along partisan lines on Thursday.

House Minority Leader Nancy Pelosi, who will become speaker in January, said during a press conference at the Capitol that she was ‘shaken by the resignation of General Mattis’ and called it ‘a very sad day for our country.’

Pelosi encouraged reporters to read the resignation letter, and to pray for the United States.

Most Republicans thanked the defense secretary for more than 40 years of public service. Many Democrats lamented that one of the Trump administration’s few ‘adults in the room’ would be leaving.

Illinois Democratic Sen. Dick Durbin said on Twitter: ‘America has lost more than an exceptional Secretary of Defense. We have lost the adult in the room when the President goes off on a tweet-filled, uninformed rant about our national security.’ 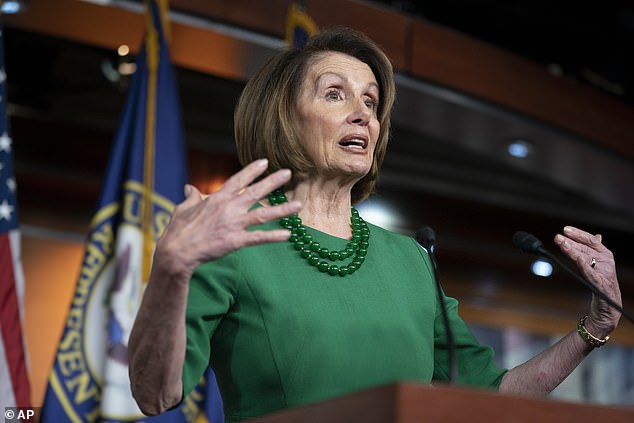 Illinois Democratic Sen. Dick Durbin said the Trump administration has ‘lost the adult in the room’

Florida Sen. Marco Rubio was among very few Republicans to offer anything but wistful thanks; he tweeted that the Mattis resignation letter points to serious flaws in America’s strategic thinking overseas

Tennessee Rep. Jim Cooper appeared to be tweeting from the same talking points. ‘I worry the White House meeting rooms will soon be vacant of adults,’ he wrote.

Fellow Californian Adam Schiff, who will chair the House Intelligence Committee in 2019 and 2020, took his criticism a step further.

‘Old Marines never die, but they do resign after the President ignores their advice, betrays our allies, rewards our enemies, and puts the nation’s security at risk. Turn out the lights when Mattis leaves; we will not see his like again while Trump remains in office,’ Schiff tweeted.

Outgoing House Speaker Paul Ryan, a retiring Wisconsin Republican, issued a more traditional statement, saying Mattis has made the nation ‘a safer America at home, and a more commanding force abroad. His patriotism and grit are matched only by his humility and graciousness.’

On GOP dissenter, Florida Sen. Marco Rubio, tweeted that Thursday’s resignation letter ‘makes it abundantly clear that we are headed towards a series of grave policy errors which will endanger our nation,damage our alliances & empower our adversaries.’

The top Democrat on the Senate Intelligence Committee called Mattis’ planned departure ‘scary,’ saying the retired general ‘has been an island of stability’ amid Trump’s chaos

Trump has speculated before about how long Mattis might stay in his Cabinet.

Asked in October during a ’60 Minutes’ interview whether his Defense Department chief might be on his way out, he responded: ‘Well, I don’t know. He hasn’t told me that.’

‘I have a very good relationship with him. It could be that he is. I think he’s sort of a Democrat, if you want to know the truth,’ he said.

‘But General Mattis is a good guy. We get along very well. He may leave. I mean, at some point, everybody leaves. Everybody. People leave. That’s Washington.’

Virginia Democratic Sen. Mark Warner tweeted in horror on Thursday: ‘This is scary.’

‘Secretary Mattis has been an island of stability amidst the chaos of the Trump administration. As we’ve seen with the President’s haphazard approach to Syria, our national defense is too important to be subjected to the President’s erratic whims.’

Warner is vice chairman of the Senate Intelligence Committee.

Mattis isn’t the only senior official on the way out. White House Chief of Staff John Kelly will depart in a matter of weeks, and Interior Secretary Ryan Zinke is also on a glide path to the private sector.

The president drew cheers at political rallies during his late 2016 transition period when he announced that Mattis would run the Pentagon.

Trump was fond of calling him ‘Mad Dog,’ a nickname Marine lore described as a loving tribute bestowed by the men he led.

In fact, his men in the field had a different moniker for him when he was a Marine colonel. They called him CHAOS, short for ‘Colonel Has An Outstanding Suggestion’–a hat tip to Mattis’ reputation as a thinking man’s soldier.