Defense Secretary James Mattis sent a dignified videotaped holiday message to American forces overseas – a stark contrast from President Donald Trump’s angry Christmas greeting in which he lashed out at his enemies.

The video shows Mattis in front of a wall of flags as he speaks in praise of U.S. troops during a special Christmas address.

‘Since Washington crossed the Delaware at Christmas in 1776, American troops have missed holidays at home to defend our experiment in democracy,’ he says.

‘To all you lads and lasses holding the line in 2018 on land, at sea or in the air, thanks for keeping the faith.

‘Merry Christmas and may God hold you safe.’

The day after the short clip was filmed, Mattis submitted his letter of resignation to Trump.

The abrupt resignation was in protest of Trump’s decision to order a troop withdrawal from Syria.

On Christmas Eve, the Department of Defense tweeted out a holiday letter from Mattis.

‘We in the U.S. military are privileged to defend America, especially at this time of year, for we ensure our fellow Americans celebrate this season of hope in peace and security,’ the former General wrote.

‘We know our freedoms are not guaranteed by themselves; they need defenders.

‘This month, many in our military will be serving far from their loved ones.

‘It is difficult work, but this is nothing new: Since Washington crossed the Delaware on Christmas Day in 1776, American troops have missed holidays to defend our citizens’ experiment in democracy. 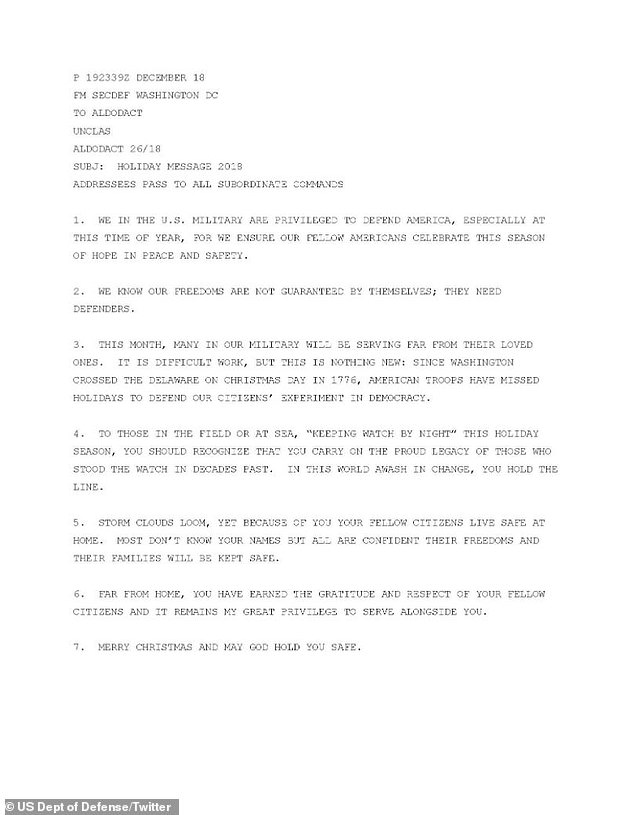 On Christmas Eve, the Department of Defense tweeted out a holiday letter from Mattis

‘To those in the field or at sea, “keeping watch at night” this holiday season, you should recognize that you carry on the proud legacy of those who stood the watch in decades past.

‘In this world awash in change, you hold the line.

‘Storm clouds loom, yet because of you your fellow citizens live safe at home.

‘Most don’t know your names but all are confident their freedoms and their families will be kept safe.

‘Far from home, you have earned the gratitude and respect of your fellow citizens and it remains my great privilege to serve alongside you.

‘Merry Christmas and may god hold you safe.’

It was reported by CNN’s Barbara Starr that Mattis spent Christmas Day at his third floor office in the Pentagon working.

Mattis’ message to the soldiers this holiday season sounds statesmanlike compared to that of his soon-to-be-former boss, Trump.

The President took to Twitter on Christmas and wished ‘everyone’ a happy holiday, including the ‘Fake News Media.’

Earlier on Tuesday, Trump used his annual address to members of the armed forces to attack members of Congress and a former FBI director while defending his border wall and denying claims he colluded with Russia during the election.

During a photo op for that call, Trump defended shutting down the government over funding for his border wall and slam former FBI director James Comey.

He ended his remarks by declaring: ‘It’s a disgrace what’s happening in our country, but other than that, I wish everybody a very merry Christmas.’

Mattis’ resignation letter initially indicated that he would serve until late February.

But Trump decided to push him out immediately after the New Year when commentators observed that the resignation letter contained implicit criticism of the President. 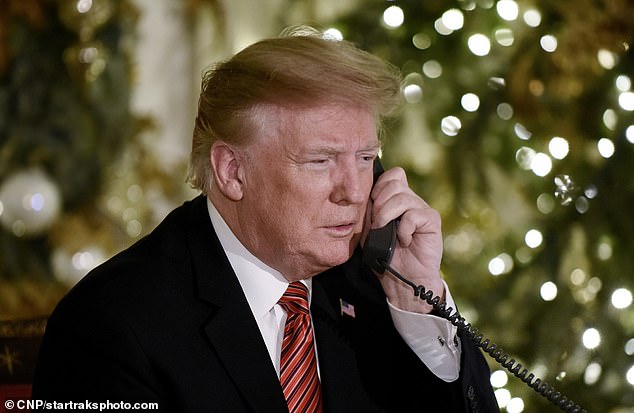 The day after the short clip was filmed, Mattis submitted his letter of resignation to President Donald Trump (seen above at the White House on Monday). The abrupt resignation was in protest of Trump’s decision to order a troop withdrawal from Syria

‘I am pleased to announce that our very talented Deputy Secretary of Defense, Patrick Shanahan, will assume the title of Acting Secretary of Defense starting January 1, 2019. Patrick has a long list of accomplishments while serving as Deputy, & previously Boeing. He will be great!,’ Trump tweeted on Sunday afternoon.

Mattis named late February as his exit in his resignation letter, calling it ‘a date that should allow sufficient time for a successor to be nominated and confirmed as well as to make sure the Department’s interests are properly articulated and protected at upcoming events.’

His letter also noted his views were not aligned with the president’s.

This will be the third acting Cabinet member in Trump’s administration: Matthew Whitaker is acting attorney general; David Bernhardt will take over as acting Secretary of Interior with Ryan Zinke exit at end of the year; and now Shanahan at Pentagon.

Mick Mulvaney has been named acting chief of staff, which the Trump White House classifies as Cabinet level position.

Pentagon spokesman Col. Rob Manning said in a statement Sunday that ‘the secretary of defense serves at the pleasure of the President. The department remains focused on national security.’

Mulvaney said on Sunday – before Mattis’ early departure was announced – that the relationship between Trump and Mattis had been ‘fraying.’

‘Look, let’s be honest with each other. I think the relationship between these two men have been fraying. I think the president no longer relied on Mattis to be able to deliver the president’s vision,’ he said on ‘Fox News Sunday.’

He noted on ABC’s ‘This Week’ that the two men ‘didn’t have the same world view. You heard the president say a couple weeks ago, I think, in an interview that he recognized that Mr. Mattis – he called him a Democrat.’

Earlier Saturday, Special Presidential Envoy for the Global Coalition to Counter ISIS Brett McGurk announced his resignation in the wake of Trump’s decision to pull troops out of Syria and just days after Mattis’s announced departure. 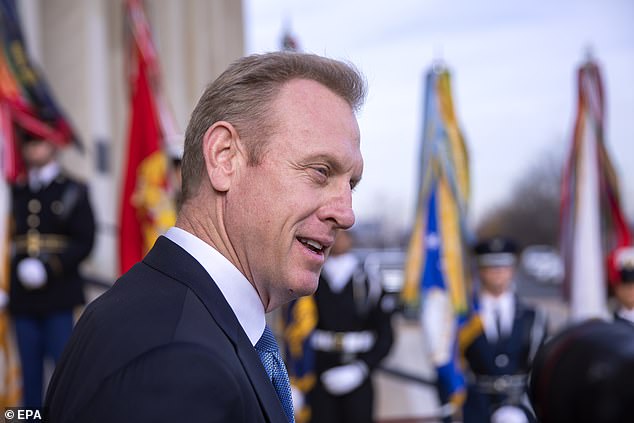 I have been privileged to serve as our country’s 26th Secretary of Defense which has allowed me to serve alongside our men and women of the Department in defense of our citizens and our ideals.

I am proud of the progress that has been made over the past two years on some of the key goals articulated in our National Defense Strategy: putting the Department on a more sound budgetary footing, improving readiness and lethality in our forces, and reforming the Department’s business practices for greater performance. Our troops continue to provide the capabilities needed to prevail in con?ict and sustain strong U.S. global influence.

One core belief I have always held is that our strength as a nation is inextricably linked to the strength of our unique and comprehensive system of alliances and partnerships. While the US remains the indispensable nation in the free world, we cannot protect our interests or serve that role effectively without maintaining strong alliances and showing respect to those allies. Like you, I have said from the beginning that the armed forces of the United States should not be the policeman of the world. Instead, we must use all tools of American power to provide for the common defense, including providing effective leadership to our alliances. NATO’s 29 democracies demonstrated that strength in their commitment to fighting alongside us following the 9-11 attack on America. The Defeat-ISIS coalition of 74 nations is further proof.

Similarly, I believe we must be resolute and unambiguous in our approach to those countries whose strategic interests are increasingly in tension with ours. It is clear that China and Russia, for example, want to shape a world consistent with their authoritarian model gaining veto authority over other nations? economic, diplomatic, and security decisions to promote their own interests at the expense of their neighbors, America and our allies. That is why we must use all the tools of American power to provide for the common defense.

My views on treating allies with respect and also being clear-eyed about both malign actors and strategic competitors are strongly held and informed by over four decades of immersion in these issues. We must do everything possible to advance an international order that is most conducive to our security, prosperity and values, and we are strengthened in this effort by the solidarity of our alliances.

Because you have the right to have a Secretary of Defense whose views are better aligned with yours on these and other subjects, I believe it is right for me to step down from my position. The end date for my tenure is February 28, 2019, a date that should allow sufficient time for a successor to be nominated and confimed as well as to make sure the Department’s interests are properly articulated and protected at upcoming events to include Congressional  posture hearings and the NATO Defense Ministerial meeting in February. Further, that a full transition to a new Secretary of Defense occurs well in advance of the transition of Chairman of the Joint Chiefs of Staff in September in order to ensure stability Within the Department.

I pledge my full effort to a smooth transition that ensures the needs and interests of the 2.15 million Service Members and 732,079 civilians receive undistracted attention of the Department at all times so that they can fulfill their critical, round-the-clock mission to protect the American people.

I very much appreciate this opportunity to serve the nation and our men and women in uniform.