China’s placement of weapons systems on manmade islands in the South China Sea is designed to intimidate and coerce others in the region, Defense Secretary Jim Mattis said Saturday, laying out a sharp criticism of Beijing at an international security forum and threatening larger consequences if militarization continues.

He warned that America’s recent move to disinvite China from a multinational naval exercise this summer was an ‘initial response’ to the militarization of the islands.

The U.S., he said, remains committed to ensuring free and open transit in the region . 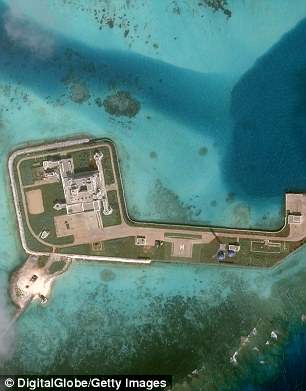 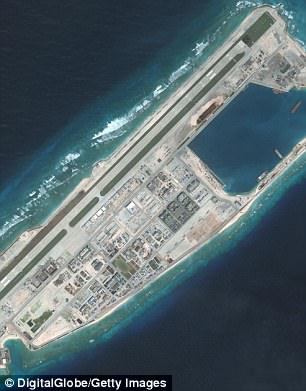 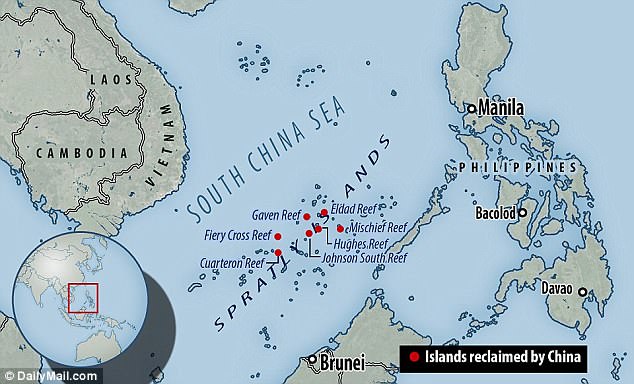 The Spratly islands is an archipelago that lies off the coasts of the Philippines, Malaysia, and southern Vietnam in the South China Sea 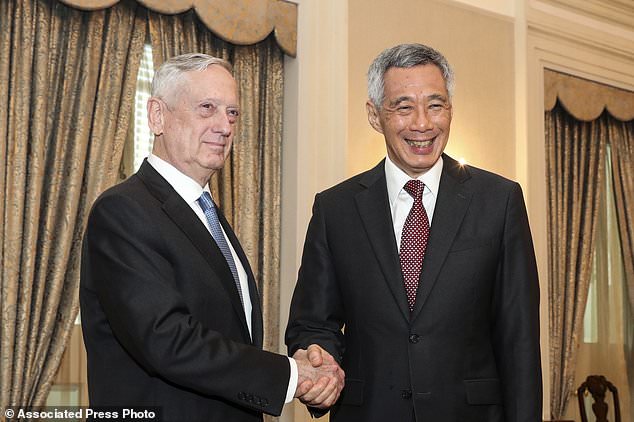 And, in response to a question, said that ‘much larger consequences’ could be in the future, if China doesn’t find a way to work more collaboratively with others in the region.

The U.S., he said, remains committed to ensuring free and open transit in the region.

‘Despite China’s claims to the contrary, the placement of these weapons systems is tied directly to military use for the purposes of intimidation and coercion,’ Mattis said, referring to the recent deployment of anti-ship missiles, surface-to-air missiles, electronic jammers and other equipment on the Spratly Islands, and the landing of bomber aircraft at Woody Island. 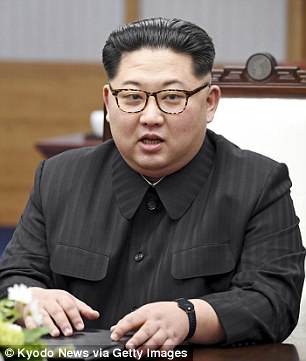 Mattis also struck at one of the key, longstanding disputes between the U.S. and China, telling the conference that America will continue to provide defense equipment and services to Taiwan and oppose any effort to alter the status quo. China claims the self-governing island as its own territory to be brought under its control by force if necessary.

But in a quick pivot, he said the U.S. welcomes cooperation with China ‘wherever possible,’ and announced that he has accepted Beijing’s invitation to visit there soon. It remains to be seen if that invitation will stand after this conference.

As expected, the Pentagon chief gave only a brief mention of the ongoing negotiations for an historic summit later this month between President Donald Trump and North Korean leader Kim Jong Un.

Trump announced Friday that the nuclear-weapons summit he had canceled with North Korea’s Kim Jong Un is back on. The summit is expected to be here in Singapore. 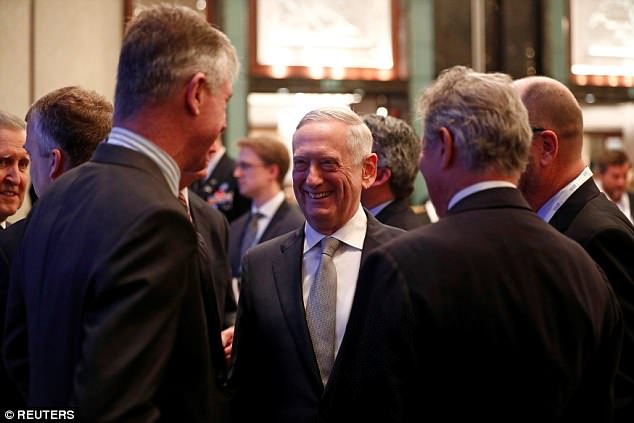 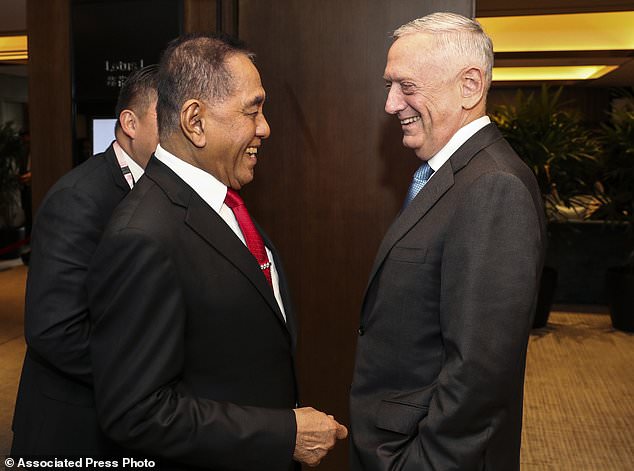 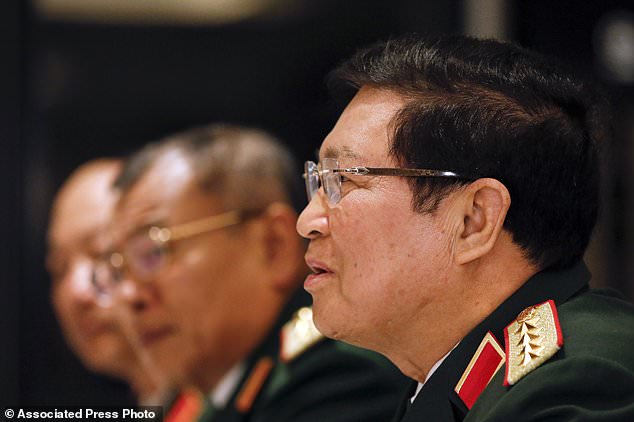 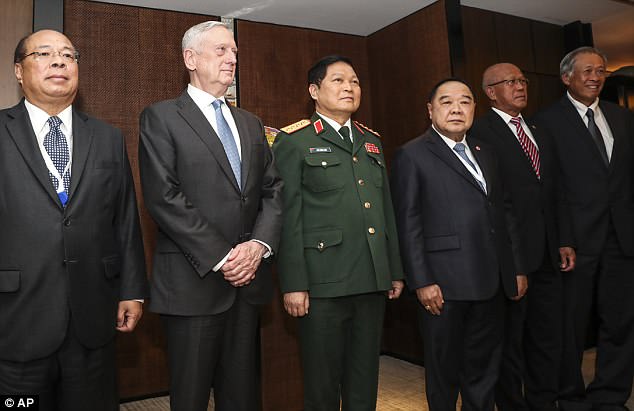 Mattis said the Pentagon will ‘hold the line’ and support the diplomatic effort to secure the ‘complete, verifiable, and irreversible denuclearization of the Korean Peninsula.’

The Pentagon leader’s comments at the annual Shangri-La Dialogue came in the wake of a tumultuous few weeks between the U.S. and China.

The Pentagon said the decision to disinvite the Chinese Navy was triggered by what it called strong evidence that China has deployed weapons systems on the islands, and called on China to remove them.

China says it is within its rights to build up defenses on islands in the South China Sea that it believes are its sovereign territory.

China’s activities, Mattis said in his speech Saturday, stand ‘in stark contrast to the openness of what our strategy promotes; It calls into question China’s broader goals.’ 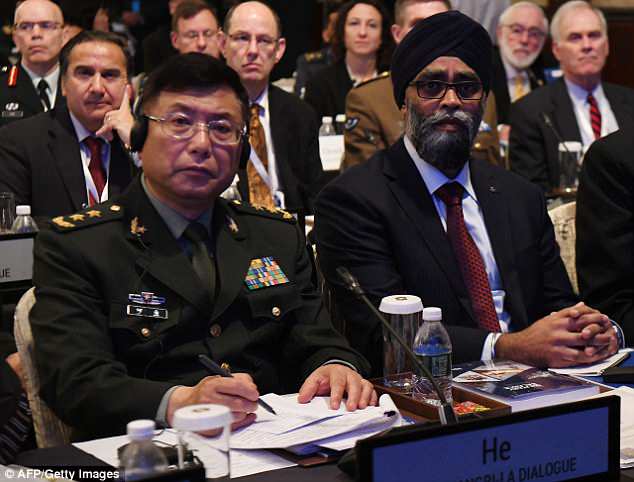 Then on Sunday, two U.S. warships sailed close to the Paracel Islands, which lie north of the Spratlys, the latest freedom of navigation operation designed to challenge Beijing’s claims. China protested the maneuver.

In recent years, the U.S. had sought to stabilize military relations with China, but the militarization of the islands has been a persistent point of conflict. 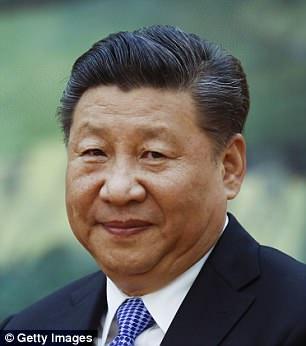 Chinese President Xi Jinping waits the arrival of Prince Andrew, Duke of York at the Great Hall of the People on May 29, 2018

Many nations fear that Beijing will use the construction on the islands to extend its military reach and potentially try to restrict navigation in the South China Sea.

China’s delegation at the conference is being led by Lt. Gen. He Lei, vice president of the People’s Liberation Army’s Academy of Military Science.

China has not sent high-level officials to the three-day meeting, in an apparent attempt to deflect attention from its campaign to expand its sovereignty across virtually the entire South China Sea.

The U.S., he said, ‘will continue to pursue a constructive, results-oriented relationship with China, cooperation when possible, and competing vigorously where we must.’ 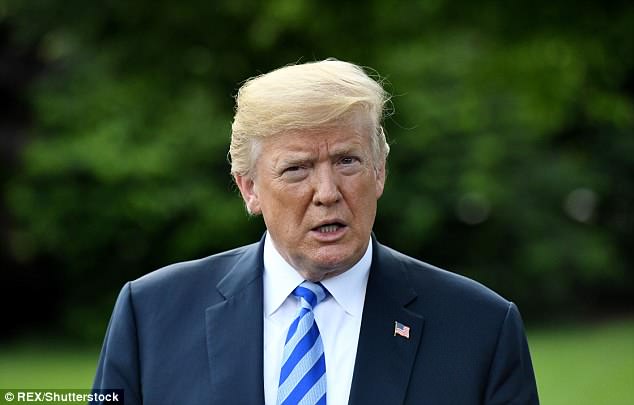