The great Easter getaway starts today with 26million motorists set to hit the roads over the four-day weekend, but forecasters have warned that Britain could face heavy snow on Monday.

Maundy Thursday is likely to see the highest number of vehicles on the road over Easter as commuters and families head home, with the AA warning it could be one of the busiest bank holiday weekends in recent years.

Traffic analysts Inrix have warned motorists that the worst times to travel this weekend will be between 4pm and 6pm today, 10am and 2pm tomorrow, and 12pm and 5pm on Easter Monday.

But drivers could face difficult conditions as they head off today – before a ‘mixed bag’ of weather this weekend that will bring rain, winds, frost and snow in some areas, along with temperatures falling to -5C (23F).

And the worst of the snow is expected on Easter Monday, with the Met Office issuing a severe weather warning for up to 1.5in (4cm) of the white stuff covering most of England down to the Midlands, Wales and southern Scotland. 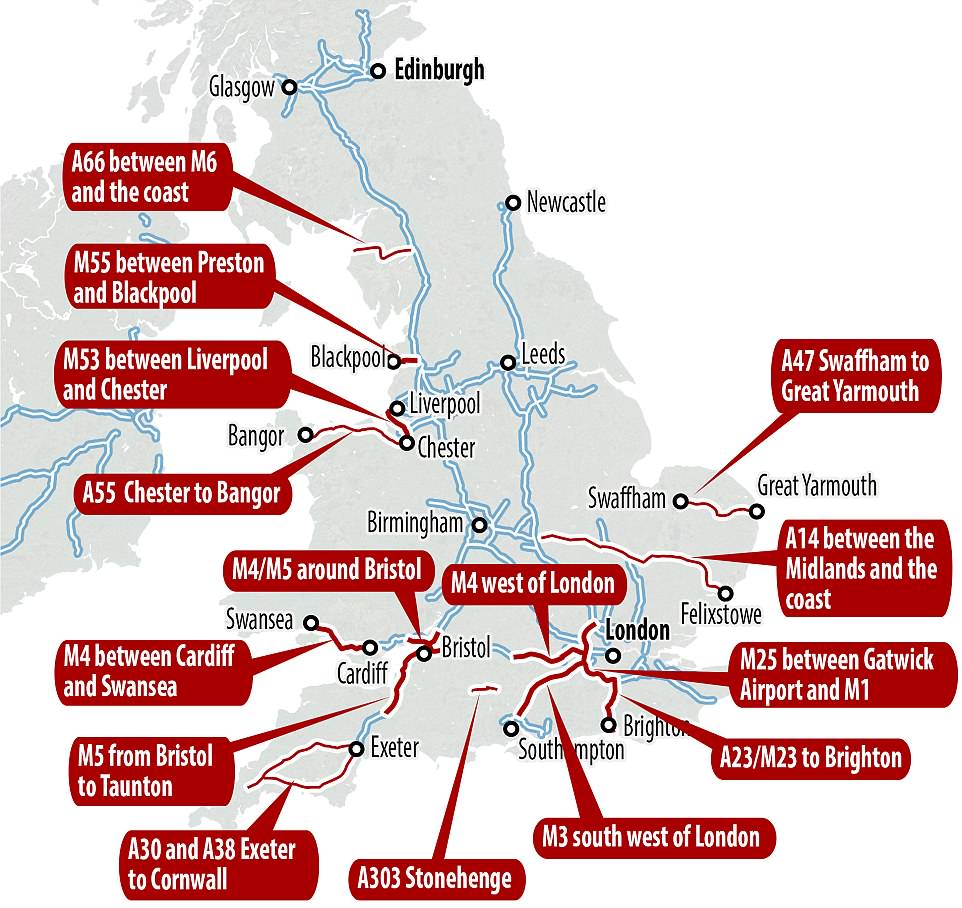 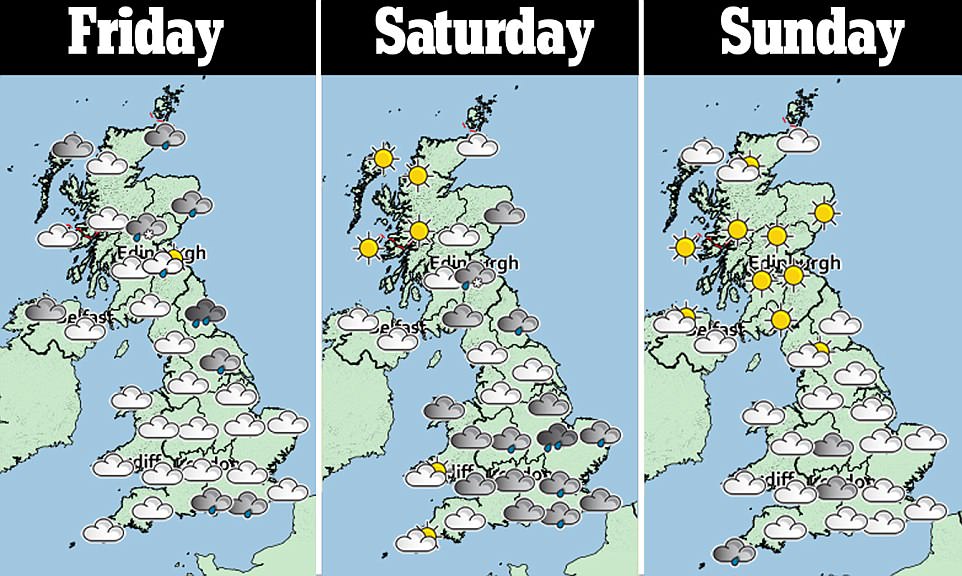 Forecasters say there could be travel delays on roads with some vehicles stranded, delayed or cancelled rail and air travel, rural communities could become cut off, power cuts and disruption to mobile phone coverage.

Today will see a three-way split in conditions, with showery rain pushing in from South West England, rain across the North East of Scotland falling as snow over the hills, and a large amount of fine weather in between. 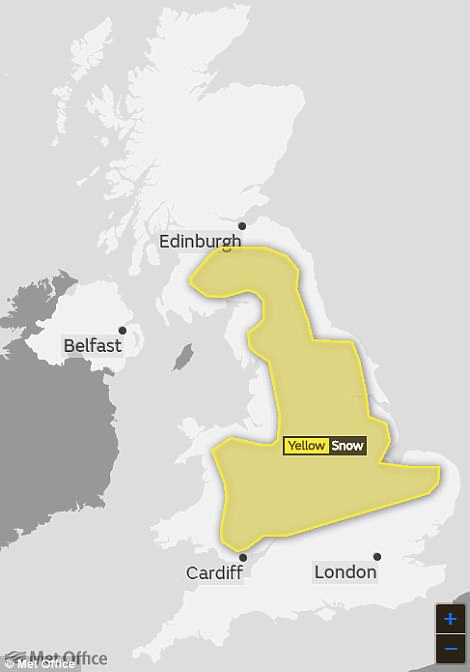 The Met Office has issued a severe weather warning for up to 1.5in (4cm) of snow across the yellow area on Easter Monday

The Met Office has issued a snow warning for the Scottish Highlands between 9pm tonight and 12pm tomorrow, warning of up to an inch of snow over higher routes that will cause longer journey times.

Saturday will turn drier, brighter and colder with a brisk north easterly wind, paving the way for a ‘widespread frost’ on Easter Sunday for much of the country and the potential of lows of -5C in parts of Scotland.

For most of the UK the day will be cloudy, punctuated by some sunshine and showers, before more rain moves in from the south on Monday morning bringing the potential of further snow to the northern hills.

Andy Page, chief meteorologist at the Met Office, said: ‘The Easter period will bring a variety of spring weather from sunshine and showers, to more prolonged cloudy and wet conditions, along with some snow in the north: chiefly over the hills.

‘So, there will be opportunities to get outside and enjoy the weekend, and you can use the rainfall radar on the Met Office app to keep track of where the rain is and when is best to get outdoors.’ 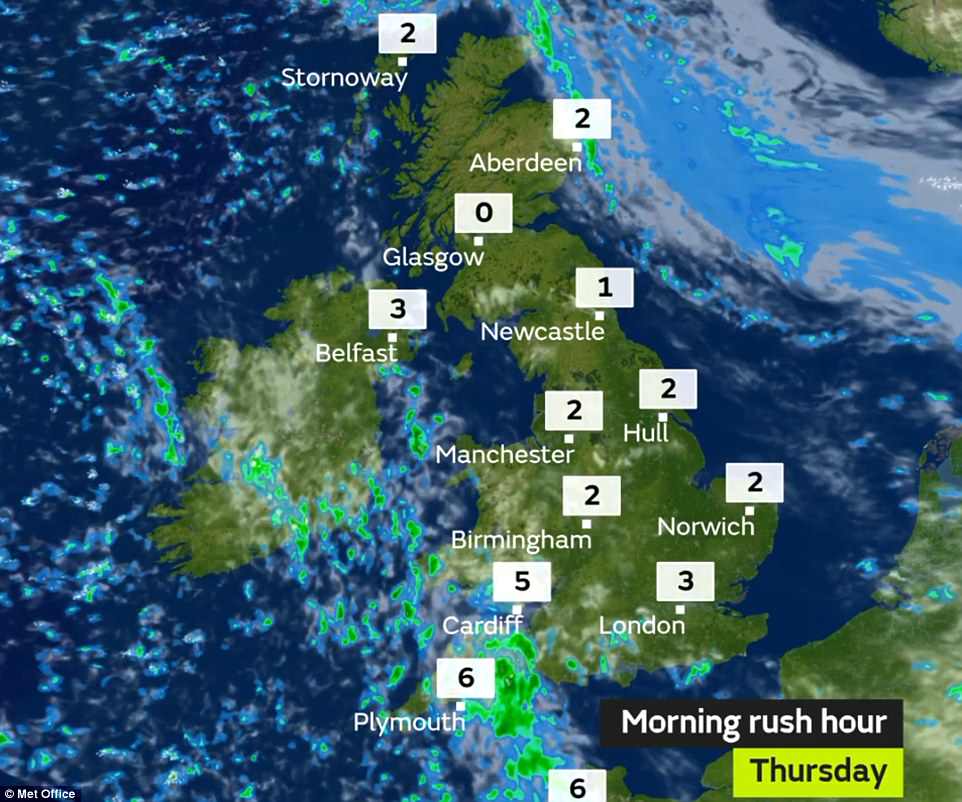 More than four out of five (81 per cent) UK motorists are planning a leisure trip by car over the weekend, according to an AA poll of more than 20,000 people. This equates to nearly 26 million drivers on the road.

The AA believes the longer gap between Easter and summer is encouraging more people to take advantage of the four-day break, which is the first big getaway weekend of the year.

Planned upgrades to some parts of the rail network will likely see an increase in road traffic through the weekend, with buses carrying rail passengers in parts of the North West, South West and East of England.

Passengers travelling between London and Scotland on the West Coast Main Line between Saturday and Monday will need replacement buses between Glasgow and either Carlisle or Preston, depending on the day.

London Euston, the UK’s fifth busiest station, will be closed on Sunday, with a reduced service on the previous and following day. Significant work in the Bristol area means no trains will run between Bristol Parkway, Bristol Temple Meads and Yatton/Bath Spa from Friday to Tuesday, April 3.

There will also be disruption to services between London Liverpool Street and Norwich, as well as routes serving London Paddington. Network Rail said it schedules engineering work for bank holidays because there are fewer passengers than normal on those days.

Easter traffic hotspots are set to include the M25 between Gatwick and the M1, the M3 south west of London, the A303 Stonehenge, the M55 between Preston and Blackpool, and the M53 between Liverpool and Chester.

Highways England said it is helping people travelling to seaside locations, ports and airports by removing some 300 miles of roadworks, meaning 99 per cent of motorways and major A-roads will be roadworks-free for Easter.

Its customer service director Melanie Clarke said: ‘Safety is our top imperative and we know from experience that almost half of breakdowns are avoidable and these can easily be avoided with simple vehicle checks.

‘Easter is always a busy period on the road network and we’d urge all motorists to make sure they do their bit to check their vehicle is roadworthy before setting off over this period.’

When will the roads be busiest this Easter?

RAC traffic spokesman Rod Dennis said: ‘The ‘Beast from the East’ might have departed but much more unsettled conditions look set to make a very unwelcome return – with the risk of snow for some of us, and strong winds and rain for a lot of the country.

‘We strongly recommend motorists keep abreast of the weather forecast through this week to help them organise their trips, especially if they are planning on driving any great distance.’

AA patrol of the year Vince Crane urged families to carry out essential vehicle checks and pack sufficient supplies in case they are affected by gridlocked traffic or severe weather.

He said: ‘As well as your snacks and road trip playlist, pack some must-haves for long journeys like a sat-nav or atlas, a fully charged mobile phone and any time-dependent medication in case of delays.

‘With the Met Office signalling the possibility of a return of the Beast from the East, don’t take your winter emergency kit out of the car just yet. That snow shovel may still come in handy.’