‘I am so happy and so proud… everyone said it was Mission Impossible’: Mauricio Pochettino hails Tottenham after reaching Champions League last 16 with Barcelona draw

Mauricio Pochettino hailed the greatest achievement of his Tottenham team as they fought back from the dead to reach the Champions League last-16.

Lucas Moura scored the vital equaliser in the 85th minute to clinch a draw in Barcelona and Spurs were helped through by PSV Eindhoven who held Inter Milan to a 1-1 draw in the San Siro.

The two results mean the Londoners, having taken only one point from their first three games, have rallied to finish second in the group with eight points, above Inter on the head-to-head results against the Italians, and they go through with group winners Barca.

It has been a remarkable fight back since the disappointment of 2-2 draw at PSV in October.

‘I am so happy and so proud,’ said Pochettino.  ‘After the draw in Eindhoven, no-one believed in us. Everyone said it was Mission Impossible but nothing in football is impossible if you have the faith and the quality.

‘We are in the next stage. It is a massive achievement for the club. I am so happy for our fans, here and at home in London and around the world.

‘It’s a massive boost for the club and to have the idea to play the next stage next year in the new stadium is a massive motivation for us. 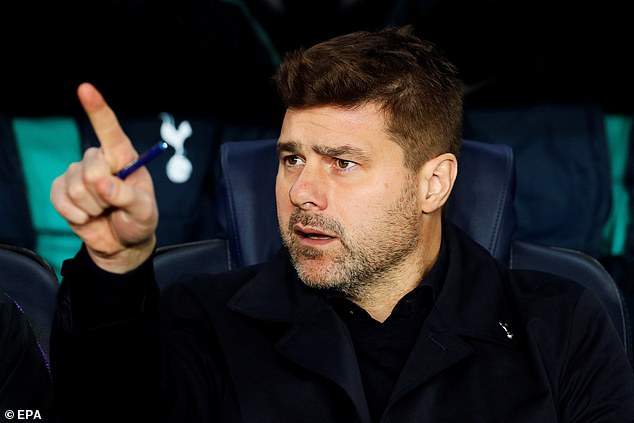 ‘It’s important for the club and we’re so happy. And I want to congratulate the chairman Daniel Levy.

‘The players and the manager get the praise but him and the board are building what I think we will be one of the best stadiums in the world and we want to congratulate him.’

Spurs fell behind in the seventh minute to a goal by Ousmane Dembele and Philippe Coutinho twice hit the woodwork. 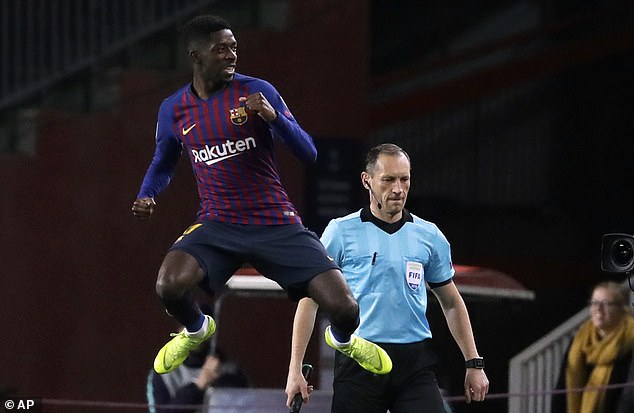 ‘Our strategy crumbled a little bit after the goal,’ said Pochettino. ‘We started playing in both stadiums, in the Nou Camp and in Italy but in the second half we settled down.

‘It was difficult to manage the last 10 minutes. The players who came on knew the result in Inter.

‘You must win the game, try to score the second goal but if you concede and lose 2-1 we are talking in a different way. It was difficult for the players but the effort was fantastic. 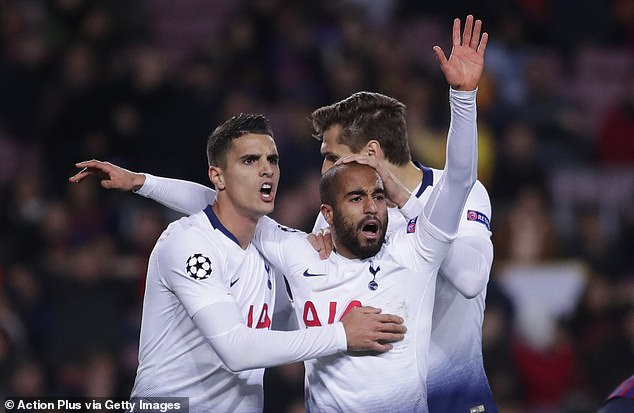 ‘We ended up waiting on Inter but we deserve to be in the next stage. There was a little bit of confusion at the end. We didn’t know if we could celebrate a lot.

‘This reminds us football is one of the most beautiful sports in the world. How it generates emotions. We suffered at times.

‘To see the celebrations inside the dressing room, it was the first time we feel something special. The connection was amazing. We need to manage that energy after tonight.

‘We have another battle on Saturday. We are in a period where playing every three days. We need to give the value to the players and the staff. They are working so hard. We need to rotate. It is tough, physically and mentally.’

Tottenham’s players were grateful for the favour from PSV Eindhoven who took the lead in Milan through Hirving Lozano and held on for a point after Mauro Icardi levelled.

Captain Hugo Lloris said: ‘We had the help of PSV. It was difficult because of an early goal but we stuck with the basics and had a good performance. The spirit was fantastic.’ 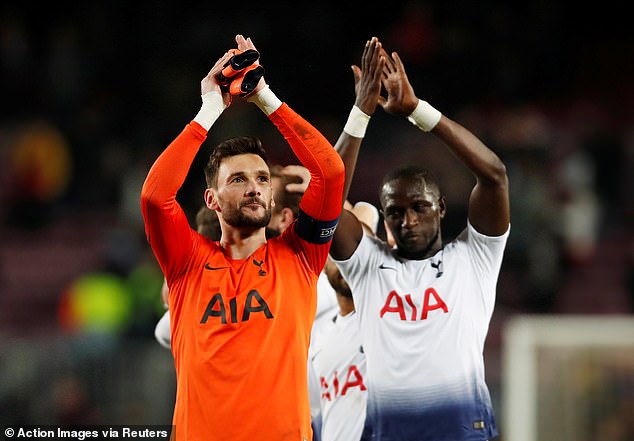 Lloris said he did not know Inter had equalised until Fernando Llorente came on as a late substitute and told him when Spurs were defending a corner. Uncertainty lingered for a few seconds after the final whistle until confirmation came through from the San Siro.

‘I understood we had gone through when I heard the Spurs fans,’ said Lloris. ‘They made such a noise.’

Spurs finished second in the group behind Barcelona and will play one of the other group winners in the next round.

‘We deserved a draw,’ said Harry Kane, who set up Moura for the goal. ‘It’s difficult when you come away in the Champions League at Barca, but we responded well and played our football.

‘We were creating chances all night. It was a matter of taking them. Thankfully PSV got a draw for us.’