Mauricio Pochettino insists Tottenham are not among Champions League favourites

‘No one will give us a chance’: Mauricio Pochettino insists Tottenham are not among Champions League favourites despite reaching final last season

Tottenham manager Mauricio Pochettino says his side are not among the Champions League favourites this season.

Pochettino guided Spurs on a memorable run to the final of last season’s competition, where they fell just short against Liverpool.

They are preparing to begin this season’s campaign, with a Group B opener at Olympiacos, but the Argentinian is not thinking of Istanbul just yet.

‘No one today will give us a chance to be one of the contenders to be in the final in Istanbul but that is normal,’ he said. ‘That makes it very exciting.

‘We know to repeat the same campaign we need to play in our best. It is so early to talk about the final but most important is to show our quality, our squad quality and do our best.

‘I don’t care if people think if we are contenders or not because we went to the final and have a possibility to fight for this title.

‘I don’t care. I am focused on starting this Champions League in a good way.’

That could be imperative as in a group that also contains Bayern Munich and Red Star Belgrade, they cannot repeat their horrible start to last season’s competition.

They had just one point after three games and needed an amazing set of results to make it through to the knockout stage.

They will be heavy favourites to win in Athens on Wednesday night and Pochettino has urged them to live up to their billing.

‘We cannot talk in different way, a few months ago we played final of Champions League and (playing) Olympiacos will put us in this level of favourites for the game,’ Pochettino said.

‘I respect the opposition and the history and it is going to be tough here. You need to show why you are favourites.

‘If you are better than opponents then OK, you were better but before the game in the Champions League you need to show full respect and Olympiacos are a very good team.

‘Their record here in this stadium in Europe is so good and it’s going to be a tough atmosphere, the first game of group stage and excitement will be high.

‘They will have good players and if we are not focused and don’t take the game in our best condition we are going to suffer.’ 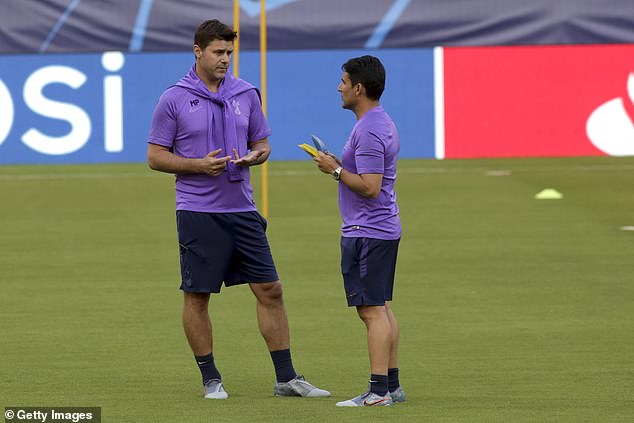