Mauricio Pochettino lays into his Tottenham players after Ajax defeat

‘Our lack of energy, that made our game difficult’: Mauricio Pochettino lays into his Tottenham players after disappointing defeat by Ajax

Tottenham manager Mauricio Pochettino tore into his players after their Champions League dream was dealt a huge blow against Ajax on Tuesday night.

Spurs face a huge task if they are to reach the final in Madrid on June 1 after Donny van de Beek’s first-half goal handed the Dutch club a slender advantage ahead of next week’s second leg in Amsterdam.

Spurs were forced to ride their luck – Ajax hit the woodwork while Hugo Lloris made an excellent stop to deny a Van de Beek brace.

And Pochettino couldn’t hide his disappointment, saying: ‘In the first half we started really not in a good way.

‘My feeling is they were more proactive, showed more energy and it was difficult for us to play. The way we conceded was so painful – in the first half hour we struggled.

‘Our lack of energy, that made our game difficult. In the second half we pushed them, tried to create some chances. We had a lack of aggression and sloppiness.

‘Today wasn’t our best game. We all agree that we cannot start the game like that.

‘But we are alive and we need to believe we can go there and win the game. The second half gave us hope for the second leg.’

Having started with a back-three, Pochettino reverted to a back-four before half-time. 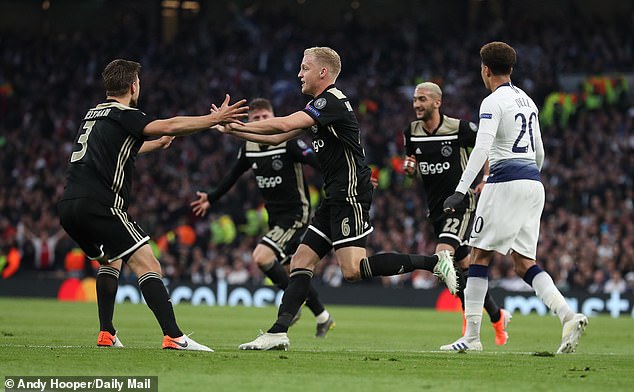 And the Argentine admitted: ‘Watching now, I can accept it was a mistake to start (with a back three).

‘I am not happy. But you cannot guess that if we played in a different shape that we maybe play in a different game. That’s about our approach not being good. That’s my responsibility as I’m the manager.’

Ajax’s win was overshadowed, however, by worrying scenes involving Jan Vertonghen, who appeared to be seriously concussed after a three-way collision with team-mate Toby Alderweireld and Ajax keeper Andre Onana.

After receiving lengthy treatment and a consultation with Spurs medics, Vertonghen was allowed to re-enter the field – but it quickly became apparent he was not fit to continue as he looked to suffer with extreme dizziness and even appeared to wretch.

Speaking afterwards Vertonghen said he had not suffered from concussion – but felt weak and briefly fainted.

And Pochettino admitted he was worried for his defender’s health – but insisted Tottenham followed concussion protocol. 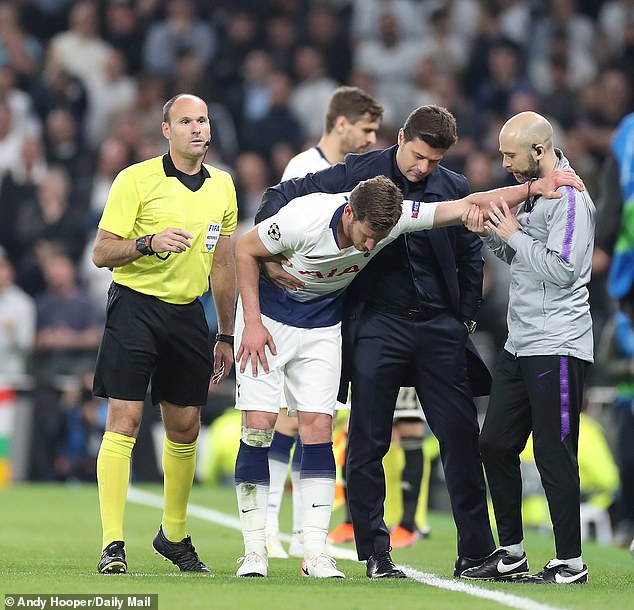 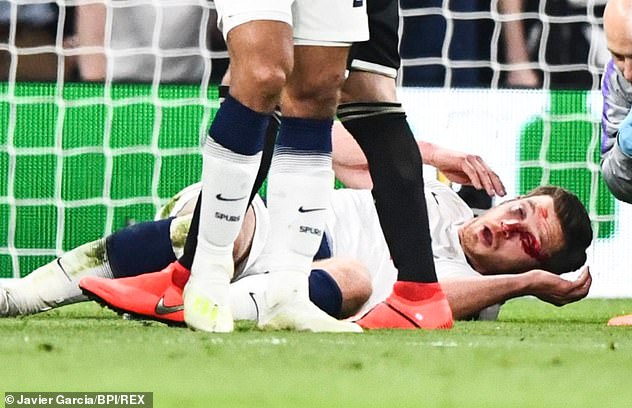 ‘I wasn’t involved in the decision (to let him play on) that was the doctor’s decision,’ Pochettino added.

‘The medical staff followed the protocol and I was never involved. But now he is okay he is walking away and more relaxed. I hope it is not a big issue, we will keep watching him because it was a big knock.

‘We must protect the player. I worried for him – that’s normal. Your priority is the health of the player.’

Vertonghen received two stitches to a cut on his nose following the collision.

Spurs were adamant on Tuesday night that Vertonghen passed all the on-field concussion tests, which appeared to show no loss of consciousness.

The fact Vertonghen was walking freely and permitted to travel home with his family immediately after the game may indicate he hasn’t suffered concussion.

Nevertheless, Spurs conduct during the incident could be looked at by UEFA in the coming days.