Maurizio Sarri can no longer be wrong. That seems to be the most credible message that has been circulating for days within the Juventus boardroom.

The team has more holes than Swiss cheese and continuously concedes goals. For the first time, the club won the Scudetto while conceding more than 30 goals, an unconvincing record that did not please Sarri’s bosses.

So how can Juventus find a way to win their most highly-anticipated match of the season?

SARRI IS A FLAWED COMMUNICATOR WHO STRUGGLES TO MANAGE THE MEDIA

Friday’s Champions League roung of 16 match against Lyon is a crossroads of Sarri’s season. In the pre-match press conference, the Juventus coach clearly explained his mood: ‘I am not worried and I am sure that my future here does not depend on the 90 minutes against Lyon.

‘The club had 13 months to evaluate the my job and in Juventus there are no amateur managers.’

Sarri maintains he is not afraid and dismisses the words of the Italian media who are convinced that he is at risk of dismissal.

Winning a Scudetto at the first attempt and after 8 years of long success is a magnificent achievement, and yet the fear of failure against Lyon could rewrite an historic season.

Sarri is a sensitive coach and an introverted character despite his pleasure for sarcasm. He was suspended during the final day defeat against Roma and communicated with his staff from the stands via text message, preferring older methods to newfangled Whatsapp. 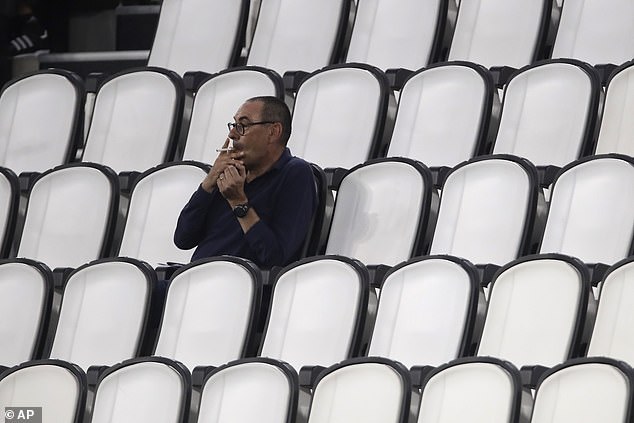 In the first Serie A match Sarri assisted his players from a special room in the stadium, starting via text message with his deputy Martusciello, communicating with the phone on hands-free during the interval. In an interview with ‘Vanity Fair’ 12 months ago Sarri said: ‘What surrounds my football is a pastime. My nephew makes me read the Facebook page’ Sarrismo e Revolution ‘. They have fun, I’m anti-social , I have never used whatsapp. ‘According to’ Tuttosport ‘Sarri continues to send text messages and even Juventus has not abandoned the old communication systems: for him progressive and socialist, voice communication is everything and does not like to entrust his thoughts to tweets or short messages. Immediately after winning the Scudetto with Juventus he sent each player and staff member a personalized message of thanks for the great work done during the season, asking everyone to concentrate on the future.

Juventus clings once again to its number 21 Gonzalo Higuain. According to ‘Gazzetta’ and ‘Tuttosport’ Juventus are ready to say goodbye to their striker who wants to return to Argentina to be close to his mother. The offers received are 2: River Plate and Dc United, a club in which his brother Fernando is the club’s assistant manager in the MLS. Sarri missed the goals of the player and his desire is to guarantee a season finale in the Champions League before saying goodbye to Italy. Sarri intends to join the club from the first minute and will try to charge his striker to try to write the happy ending before his goodbye. At 33, Pipita is no longer what he was a few years ago and the club has already decided to replace him with Milik. The Polish striker of Napoli will inherit the role of central striker from Higuain.

Juventus has always had great athletic trainers in the past such as Giampiero Ventrone and Bangsbo Andersen, Danish physiotherapist protagonist of the miracle Atalanta. Sarri has not been able to improve the aerobic quality of his players this season and this drop in physical condition seems to be the sign of the club’s discontent. Juventus did not like the continuous performance problems of many players including Ramsey, De Sciglio, Khedira and Douglas Costa. Sarri and his staff should have studied a particular series of specific workouts to improve the conditions of the chronically ill of the club but all 4 have never managed to improve athletically and today they are a burden for the club’s economic accounts as well as for the first Team. Ramsey is an emblematic case: physical problems are added to problems in Juventus’ tactical chessboard. The Welsh boy has become an insurmountable problem and his sale at the end of Serie A seems to be increasingly likely. The Welsh midfielder has not been a decisive player since he arrived in Italy: he is never in excellent condition and he has never found the best position in midfield and in Sarri’s 4-3-3.

Yesterday the cars of Nedved and Paratici were present at the gates of the training center. The 2 managers attended the team’s training and spoke individually to many players, including Buffon. Their presence is essential to load the team and try to win a game that guarantees Juventus more than 10/15 million euros in case of exceeding the turnover for the market pool parameters. According to ‘Dagospia’ Nedved and Paratici begin to fear the decisions of President Agnelli who could decide to change managers for next season. The contract of the sports director Paratici expires in 2021 and even if Agnelli has repeatedly reiterated his desire to extend the contract until 2024, he could be replaced by Gigi Buffon or replaced by another internal manager such as his assistant Cherubini, now responsible for the youth sector. .

When a person is under pressure in Italy it is said that ‘chews bitter in the mouth’. When Sarri is nervous, the number of cigarettes he smokes rises to 60 per day. During training, he never abandoned the garments of the same people as victory over Lazio and never left his baseball cap in the locker room. With the Juventus players there were 2 briefings yesterday and Sarri hope that the players can overcome the fear of failing and conquering the overcoming of the European round. His certainty is that the team will fight until the last minute but he is afraid that the physical condition could betray the team compromising a fundamental challenge from the whole environment.

THE SHADOW OF PAULO SOUSA AND SIMONE INZAGHI

According to ‘Repubblica’, a strategy in the event of European bankruptcy has already been studied and 2 profiles have been identified. The first would be Paulo Sousa, former Juventus player and Fiorentina coach of Bernardeschi, now Juventus player. Sousa would be the club’s favorite due to his past in Turin and the great esteem for him in the locker room. The Portuguese coach was the Juventus attacking midfielder in Marcello Lippi’s 4-3-3 while as a coach he has shown that he knows how to interpret more offensive schemes, also fielding his teams with 3-5-2 and 4-2- 3 – 1. The second profile is Simone Inzaghi, current Lazio coach, who may not renew his contract with Lazio in search of a new adventure in a top European club. Paratici and Inzaghi are friends and have known each other for many years, having both grown up in Piacenza. Simone Inzaghi belongs to that small circle of coaches that would have excellent references in the Turin environment. Both would have already responded positively to some indirect contacts with some Italian intermediaries who would have taken care of completing the negotiations.